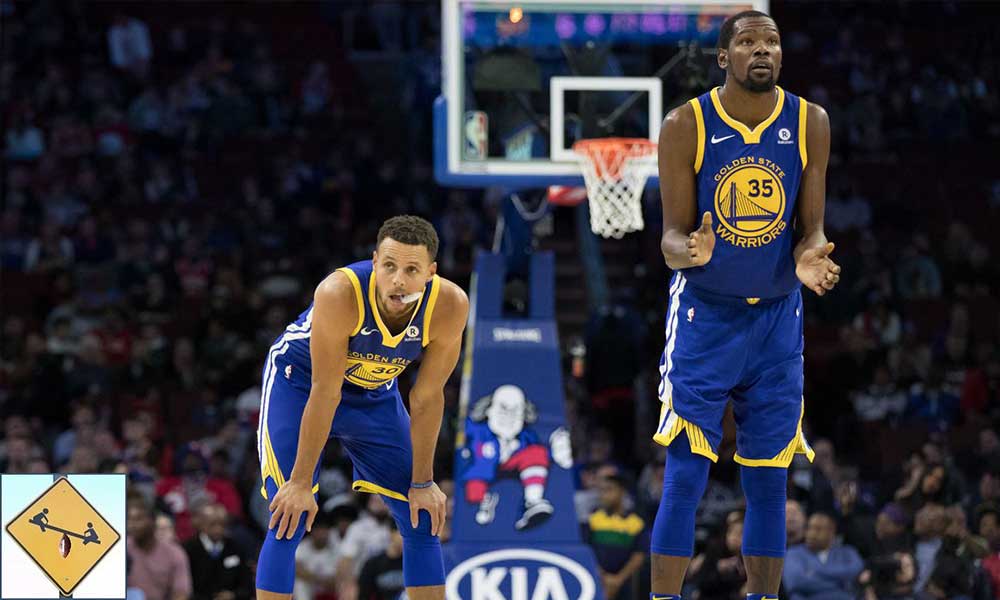 Injuries to three major stars leave the Golden State Warriors hobbled as the NBA Playoffs approach. Will they derail them from an NBA Finals repeat in 2018?

Amidst all the March Madness, an interesting storyline has developed in the NBA. With one pin dropping each day it seems, the Golden State Warriors are suddenly, incredibly vulnerable. I have to imagine Golden State is currently going through what amounts to the worst case of injury luck in the history of the league – at least in terms of talent on the bench, if not volume of players out.

ALSO ON BUZZCHOMP: UConn’s Kevin Ollie Had To Go

If you’re counting, that’s three All-NBA-caliber players and two former MVPs on the bench for the stretch run of the season. On Friday night, just for good measure, GS lost Omri Casspi to a sprained ankle, and the team lost to the hapless Sacramento Kings, who are presumably trying to lose games for the benefit of ping pong balls.

This feels unprecedented, though the Warriors built up enough of a cushion in the standings that they shouldn’t fall from the seed they currently hold. They are 2.5 games behind Houston, who now seems assured of holding the one seed in the West. Yet Golden State has already clinched a playoff spot and has a 10-game buffer on the rest of the conference for the two seed.

And yet, this feels worrisome for a team that was expected to cruise to another NBA championship. The Utah Jazz are the team currently aligned with the Warriors for a first-round playoff matchup. Utah has won 20 of its past 22 games, including a win over a healthy Warriors squad. San Antonio is also battling it out for that potential seventh seed. With a healthy Kawhi Leonard, a first-round matchup against the Spurs just seems cruel.

NBA seasons aren’t supposed to be easy, and GS has had incredible injury luck over the course of this three-year, historic run. However, it would feel slimy if it ends in 2018 because everyone of note hits the injured list at the same time. All three star players have time before the playoffs to return to full health, but what are the chances that all three actually do? Before the year, basketball fans were concerned about being robbed of anything interesting because of this team’s domination. Now, they should be worried about missing out on that domination altogether.

I can’t decide if this is an amazing turn of events for the NBA and the NBA Playoffs this season, or a truly unfortunate ‘perfect storm’ that appears to be derailing the Golden State Warriors. I’m leaning towards the former, because the NBA Playoffs suddenly feel exciting and unpredictable. Furthermore, if the Warriors manage to overcome these three major injuries and win another championship, that will be infinitely more interesting than if they just did it at full strength as expected. No matter when the Warriors get healthy, if it’s in time for the playoffs, during the playoffs themselves, or if the team fails to get back to 100%, we have a new narrative in the NBA.

LeBron James is facing a similar hill to climb in the Eastern Conference. His Cavaliers are not the favorite and will not enter the playoffs as favorites. The Cavs are currently in fourth place in the East, yet they could easily fall or climb a few spots. The Golden State Warriors more or less have the second seed locked up in the Western Conference, but they won’t be the favorites either. This is an amazing turn of events for the NBA!

Conspiracy theorists may believe that the NBA set this all up. They needed to break the mold in terms of our two perennial favorites in Cleveland and Golden State. Yet that is hogwash! The Cavaliers were crumbling apart and dismantled their roster. Who knows which Cavs team will show up in the playoffs? Golden State is facing three significant injuries to its three biggest stars. No one wants that to happen! But the end result is rather good for everyone involved. Curry and Durant are not missing the playoffs. These injuries let them rest down the stretch without taking flack or punishment from the NBA. In reality, the Warriors’ stars will be more prepared for the playoffs after sitting for so many weeks prior, assuming they heal fully.

I’m not suggesting that these are fake injuries, but its worth questioning their severity. Golden State does not have much to play for down the stretch. Does their first round matchup truly matter? If they can’t dispatch the Spurs, Pelicans, or Jazz, then they don’t deserve to be considered one of the best in the league. I want to see Warriors versus Rockets, but the fact that this isn’t a guaranteed matchup and other matchups may in fact be interesting is awesome. Injuries suck, but right now they are making everything just a little bit better.