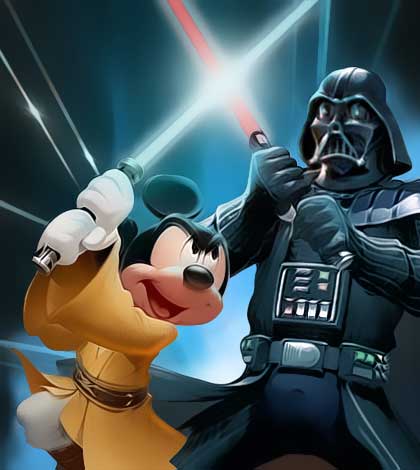 In a move almost as stunning as Disney’s purchase of Marvel a few years ago, the Walt Disney Company announced its purchase of Lucasfilm Ltd. today for $4.05 BILLION, half in cash and half in Disney stock.

The present intent is for all LucasFilm employees to remain in their present locations, many of which are in Northern California. No word on whether or not they have to take the Mouseketeer Oath.

“Lucasfilm reflects the extraordinary passion, vision, and storytelling of its founder, George Lucas,” said Robert A. Iger, Chairman and Chief Executive Officer of the Walt Disney Company in a press release on the Disney site. “This transaction combines a world-class portfolio of content including Star Wars, one of the greatest family entertainment franchises of all time, with Disney’s unique and unparalleled creativity across multiple platforms, businesses, and markets to generate sustained growth and drive significant long-term value.”

Sure, that sounds dry, but there it is — two huge entertainment empires just combined to become even more of a juggernaut.

But what does this mean for us, the consumers and fans?

What We Don’t Know:

– In truth, anything else. Iger makes promises that Lucasfilm will be integrated throughout the company, in games, videos, publications, etc., but that doesn’t necessarily change anything that we’ve already had happening, as Lucas has been very, very savvy about marketing from the very beginning.

– What about Indiana Jones? No mention has been made at all. Just as with Star Wars, there has already been cross-over in the parks, but unlike Star Wars, that does seem to be a personality driven franchise that people like but haven’t started religions over.

– How much power has Lucas really ceded? He personally now owns $2 billion in Disney stock. Where does that put him in comparison with Marvel’s Ike Perlmutter, who allegedly exerts a lotof control behind the scenes? Will a fandroid please write in and let me know?

– That cross-company merging is going to be incredible. Lucas always licensed the film rights to Fox anyway as a matter of courtesy; Disney can easily get those. But as all this is still subject to clearance under the Hart-Scott-Rodino Antitrust Improvements Act, you can expect some challenges from Fox and Paramount just so that things don’t go down too easily.

– Dark Horse loses big-time. For a few months, the Star Wars license will remain with them, but the same thing happened to Boom! Studios when Disney bought Marvel. A solid line of Disney comics got cancelled when the company realized they owned a comic book company of their own outright, but then still didn’t quite know what to do with their properties. So expect that Dark Horse’s excellent Star Wars titles will all just disappear, though it’s also possible that some of their creative teams could show up working on titles for Marvel. Following that Boom! pattern however, I’d say that comics readers will lose some on this one. UPDATE: Dark Horse President Mike Richardson states that Star Wars will stay at Dark Horse for the “near future.” Um, yeah. That’s not super reassuring.

– Mish’al Samman may technically be now owned by Disney.

What We Can Dream:

– A restoration of the original Episodes IV, V and VI, where Han shot first and Johnny Depp appears with Yoda and Obi-Wan at the end.

and… (credit to Steph Rodriguez)…