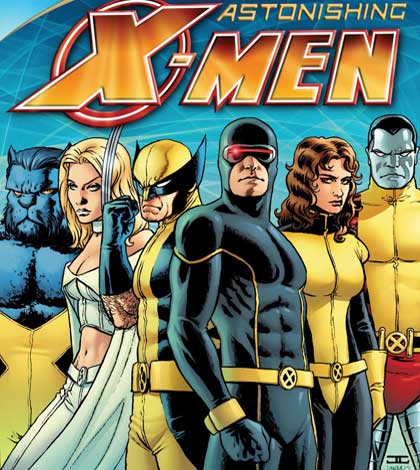 This past summer, the combination of Joss Whedon and Marvel superheroes equaled the third biggest money-making film of all time. But were you aware that this wasn’t the first time Whedon dabbled in the Marvel Universe? Once upon a time, Whedon tackled the X-Men, and the results were astonishing.

At least, that was the title of the book created just for Whedon and artist John Cassaday to breathe new life into a franchise that was still doing pretty well. But this team took it over the top in terms of storytelling quality. Astonishing X-Men #1-12 stand alone, easily experienced without knowing much about the characters. And now, thanks to Shout Factory and its Marvel Knights imprint, you don’t even have to read it. On November 13, it will be released in a two-disc blu-ray set as a motion comic.

Cassaday’s artwork is cinematic to begin with, so when motion comics began to be taken seriously, Astonishing X-Men was an obvious target for Marvel to adapt. In conjunction with Neal Adams’ Continuity Studios, Marvel created a product that isn’t quite animation, but definitely leaps beyond the printed page. It’s also the best crossover to motion from a printed comic, possibly because Cassaday himself oversaw the project to bring his drawings to life.

Previously released as four separate DVDs, this marks the first time the series has been on blu-ray. For my money, high definition really makes artwork pop, and every one of Cassaday’s lines stands out. But really, it’s about the story.

From the beginning, Whedon plants the seeds for a sweeping story, but divides it neatly into smaller arcs. The first is “Gifted,” in which Dr. Kavita Rao develops a “cure” for mutants, which causes strife within the team when Dr. Henry McCoy, aka the Beast, considers taking it. That may sound familiar to you if you watched X-Men: The Last Stand, which appropriated some of Whedon’s concepts without acknowledging the larger arc. Dr. Rao has an ally posing as a mutant who is actually an alien desperately trying to prevent the prophesied destruction of his planet.

In “Dangerous,” the X-Men grow closer to unraveling the secret of the conspiracy against them, but run smack into an enemy they know well but never expected. It’s not exactly a betrayal, but it is a development that throws everything for a loop.

Whedon followed that with “Torn,” in which allegiances shift and the X-Men realize they have to leave Earth for a while. That spins into “Unstoppable,” which… well, comics marketers often say “this is the one that changes everything!”, but this really does change everything. You could just experience this one storyline and be satisfied with the X-Men, because Whedon closes his arc neatly, but of course, there has been plenty of it since. Just none quite as good.

The blu-ray also includes interviews with now-Chief Creative Officer Quesada and Neal Adams, and an original music video. But after watching the series, you won’t need to hear the two creators blather on about why this was a worthwhile endeavor. You’ll have experienced it. And yes, you will be astonished, but more importantly absolutely satisfied.