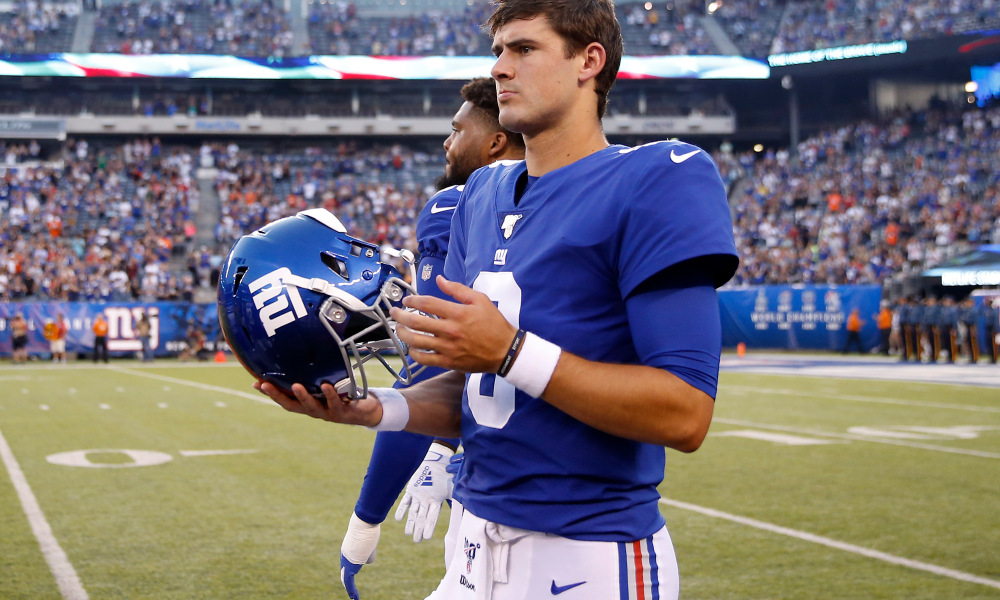 We endured months of Daniel Jones bashing, questioning, and anointing. Thankfully for the New York Giants, he’s everything but what the media claims.

It was only a few short months ago that the entire sports world was blasting general manager Dave Gettleman and the New York Giants after they selected Daniel Jones with the #6 overall pick in the 2019 NFL draft. The amount of negativity and outrage was something that I have never seen before, because everyone “knew” that he was going to be available at pick 17. I said it then and I will continue to say it; I don’t buy that and no one is going to convince me otherwise.

It got to the point where the only time anyone talked about the Giants was to discuss how they botched the draft. Daniel Jones had a losing record in college, the Giants should tank again for the QB draft class of 2020, and so on. There were even “fans” that were booing Daniel Jones at Yankee Stadium. Then training camp started… hypocrites.

This all leads to my point. I am calling out the phonies for their fake outrage, because once training camp opened in late July all of the Daniel Jones outrage was muted all the sudden. So what happened? Oh that’s right, now everyone got a chance to see that Daniel Jones can actually throw the ball well. A professional offensive line and players that can actually catch the ball make a huge difference, unlike the players he had at Duke. Has anyone heard a positive peep about Dwayne Haskins? Don’t even get me started on Kyler Murry. He’s a prime candidate for not living up to the hype.

Daniel Jones completed the preseason 29 for 34 (85.3%) with 416 yards and 2 TDs. He led all teams in passing and suddenly the talk is not that he was a mistake at #6. Now people are predicting when he will be under center and staring for New York. I have even heard people claim he’s a threat to start week #1. We all know that is not going to happen unless Eli Manning slips in the shower.

It got to a point where John Mara came out and stated that in a perfect world Jones would not see the field at all in 2019. So I ask again, what changed everyone’s mind in a few short weeks? Why did the avalanche of hatred evaporate overnight? The answer is simple. People were making judgements before they knew what they were talking about, before they even saw him play.

I’m not going to sit here and claim to have watched him at Duke, because I didn’t. But what I will tell you is that I trust the people who are getting paid more money than I will ever see in my lifetime to do the analysis and make these draft decisions. Apparently everyone forgot that in 2017 the Bears traded up to #2 to grab Mitchel Trubisky instead of drafting Patrick Mahomes or Deshaun Watson. Where was all of the backlash then?

Coincidentally, as I am writing this I am listening to Danny Kennel (former NFL quarterback) actually sound reasonable. He’s the ONLY one that shares my same opinion on this point. He is stunned by the complete overreaction in the media, comparing Jones and Murray and so forth.

This season will be Eli’s swan song in a New York Giants uniform and eventually he will pass the torch to Daniel Jones. I see three scenarios where a switch would be made this season. Week 7 after the Giants play the Patriots on Thursday night, giving Jones 10 days to prepare for Arizona. Week 12 after the bye, but the problem there is that the Giants are on the road at Chicago afterwards. The final scenario is the moment New York is eliminated from the playoffs (lets hope this is not the case). Then there is no reason for Eli to start anymore.

Time will tell whether this will all work out. But until that is determined, we must wait patiently. We must wait to see if Daniel Jones is the real deal or not before we rip the Giants a new one.