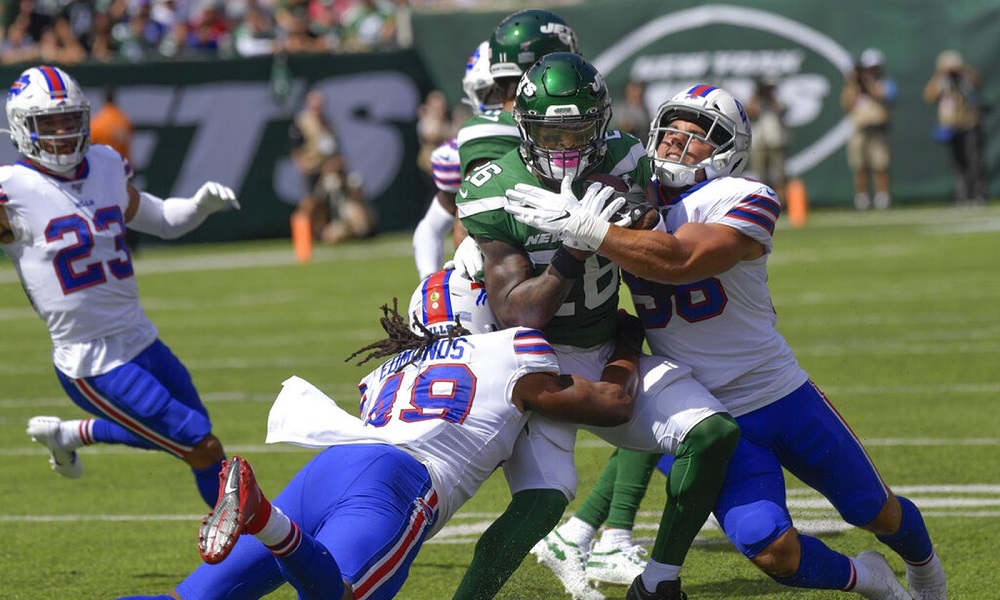 All those New York Jets fans who thought this would be a new year, consider yourself duped. In another catastrophic collapse of complete ineptitude, the Jets outdid themselves.

All three areas of the New York Jets game against the Buffalo Bills looked like complete crap.  It may have just been week one, but losing like that doesn’t go away. I actually, at one point, found myself trying to understand the logic of New York’s coaching staff.  But that’s way too much thinking for a mere “NARP” as myself.

More BuzzChomp: Daniel Jones is Not who the media claims

How did the Jets “earn” an F- in their first loss of the new season? With pain and suffering, that’s how. I’m not one for bright spots, so don’t expect any as I address the offense, defense, and special teams/coaching. It was an utter disaster to start the season.

The Jets offense was terrible.  For all those fans, including myself, who thought that New York finally turned the page and was going to be a viable offense, welcome back to reality.  Sam Darnold looked average at best.  He couldn’t complete a pass more than five yards down the field. I guess he forgot other people existed other than Le’Veon Bell and Jamison Crowder.  I know it’s only week one, but if this is a sign of things to come, oh boy.

Bell looked OK and he had some nice runs, plus a great catch for the only offensive touchdown of the day.  He certainly has the ability to make this offense a force, but as I said before, this IS NOT the Pittsburgh Steelers.  I wonder how long it takes for him to get disgruntled and start acting like a star diva.

Here’s my biggest issue, the offensive line looked brutal.  Darnold at times had no time to set up the play and Bell was hit behind the line of scrimmage way too often.  I know that most of these players didn’t play the preseason, but come on!

When C.J. Mosley went down, this team went with him.  It’s unfortunate because for a while the defense was the only reason the team was competitive.  Having forced four turnovers in the first half and a safety, this team should have won.  But in typical Jets play calling, they started to play not to lose, rather than trying to win.  That’s what separates the elite from the garbage. Let’s not fool ourselves, this team is currently garbage.  They once again made Josh Allen look great and a rookie running back look like Ezekiel Elliott or Saquon Barkley.  It makes me sick.

Yes, this grade does exist. Just ask my high school French teacher. Let’s not sugar coat it, there better be a new kicker on this team by week 2.  You will have plenty of time to find one.  If the Jets were smart, they would have signed their all-pro kicker from last year and we wouldn’t be in this mess.

I also didn’t realize that you can’t return puns. It felt like I was watching Jeremy Kurley all over again.  The situation was so bad that when they actually scored a touchdown, they didn’t even kick and extra point. The coaching was just as abysmal.  They made no effort to change anything.  Offense wasn’t clicking, defense wasn’t making tackles, and the specials team… Well, I think you all know where I’m going with this.

So it’s only one week right?  Wrong!  The New York Jets have a brutal stretch of football coming up over the next few week. You can’t honestly stand there and tell me that you took positives out of this football game.  If you do, you were watching the wrong game.

It’s a complete joke.  At one point in the broadcast the announcer mentioned that road teams that turned the ball over four or more times lose 99% of the time.  Well that 1% is when those team have played the Jets.  Good thing they got those new uniforms, because everything else looks like shit. SAME OLD JETS.