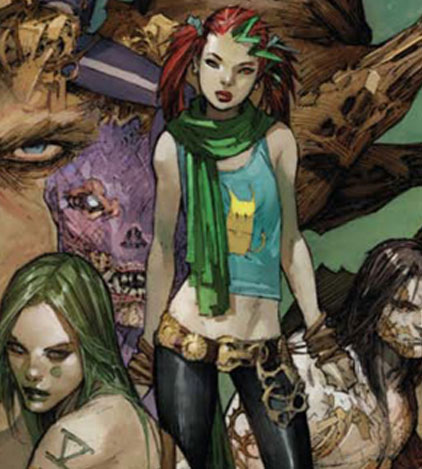 Over twenty years ago, Marc Silvestri joined six of the other hottest creators in comics to launch Image Comics, a publisher that changed everything by shaking the dominance of the Big Two: Marvel and DC. Each creator offered up titles that danced around the superhero concept without following the traditional mold. Silvestri put forth Cyberforce, a team that was pretty much what it sounded like — a group of cyborgs with that were also mutants and, since it was the early nineties, had cool code names like Ripclaw and Cyblade. Never mind they also strongly resembled the X-Men.

Within Image, Silvestri formed the imprint Top Cow, and his big success ended up being Witchblade and its related book, The Darkness. At its height, Cyberforce managed to get a line of small action figures, but in the nineties, most properties did.

So what does this have to do with 2012? In July, Silvestri announced a new Kickstarter project — a relaunch of Cyberforce co-written by himself and Matt Hawkins with art by Khoi Pham. Seeking $75,000, the project ended up getting donations of over $117,000. Clearly, the world was ready. Backers would receive a variety of bonuses, but the average comics fan would get a big bonus without backing the book — the first five issues of the relaunch would be available in digital form for free. No, it got wilder. The first five issues would be available in participating comics shops FOR FREE.

On October 16, issue #1 hit the stands. If you worry about not knowing the history of the title, have no fear. Silvestri and Hawkins have crafted an easily accessible (though not simple) story that alludes to the past but could be a complete rethink of the concept. Also utilizing character concepts from a book called Aphrodite IX, Cyberforce #1 works as a dystopian science fiction story, and a good one at that.

The cyborgs forming the team have long been in conflict with the government, which itself has shadowy connections to an impending apocalypse. The heroes may not know that’s what they’re fighting off, and due to overwhelming odds, may not have much of a chance at success, either. It’s laid out very well, and by the end of issue #1, Silvestri and Hawkins look to be taking the story in unexpected directions. They seem less interested in their title characters than actually telling a good story, and there are not enough books out there with that same priority. Did I mention that on top of that, it’s FREE?

But this is comics, so I’m remiss if I don’t mention  Pham’s artwork which is detailed and beautiful. While definitely following the influence of Silvestri’s original work on the series, Pham takes it in new directions, and his design work is appealing if not completely fresh.

Eventually the first five issues — all of which will be FREE — will be collected in a hardcover edition, price undetermined. Check to see if your local retailer is carrying the free issues; if not, the hardcover will be worth it.