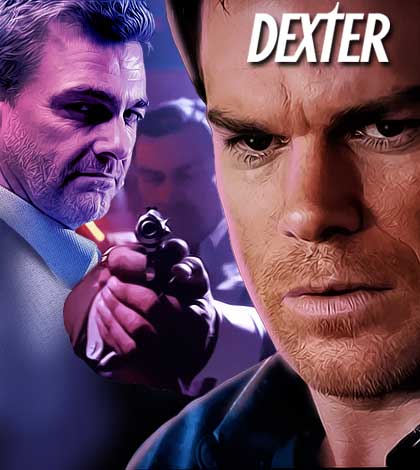 While cleaning his body disposing boat, this week opens with ghost papa Morgan giving Dexter his usual guilt trip without the slightest hint of any sound advice. If my dad nagged me the way he did I’d be forced to call that little medium lady Tangina from Poltergeist to get rid of him. Regardless, Dexter discovers the blood of fanboy Louis on all over his pretty little boat.

LaGuerta’s secret blood slide caper gets leaked out adding more stress to Deb’s already stressful predicament. LaGuerta asks a reluctant Deb for assistance on resurrecting the hunt for the Bay Harbor Butcher. “We are in a storm of f@#k!” Deb later says to Dexter. Poor Deb is barely holding it together now that she knows her brother is a mass murderer.

Out for revenge, Sirko really ups his game in this episode. After a failed attempt at snuffing out Dexter in his own home, Sirko makes it very clear that he’s out for blood. Not only for Dexter but whole Miami Metro police force. As usual for safety reasons, Dexter sends his son away with his sexy maid then stays the night at a cheap motel with Deb. While engaging in awkward pillow talk one might say…get a room already. Oh wait, they did get a room. Hmmm.

Meanwhile Hannah McKay flirts and flips and her hair at Dexter while reminiscing about her past experiences with her killer ex-boyfriend. Unfortunately Dexter sees through her disguise and secretly confronts her. A killer can’t fool a killer.

Payback time comes around as Dexter lures Sirko into an out numbered Colombian bar in a bad part of town. Surprisingly, Sirko transforms into the Terminator, killing everyone at the bar leaving a bloody mess for the Metro. Look out Dexter.

Sirko is later arrested for the murders and sent to the big house. Dexter pays him a visit to make sure the war is over. On the contrary, Sirko makes it crystal clear that he’ll stop at nothing for his revenge. Now that’s commit.