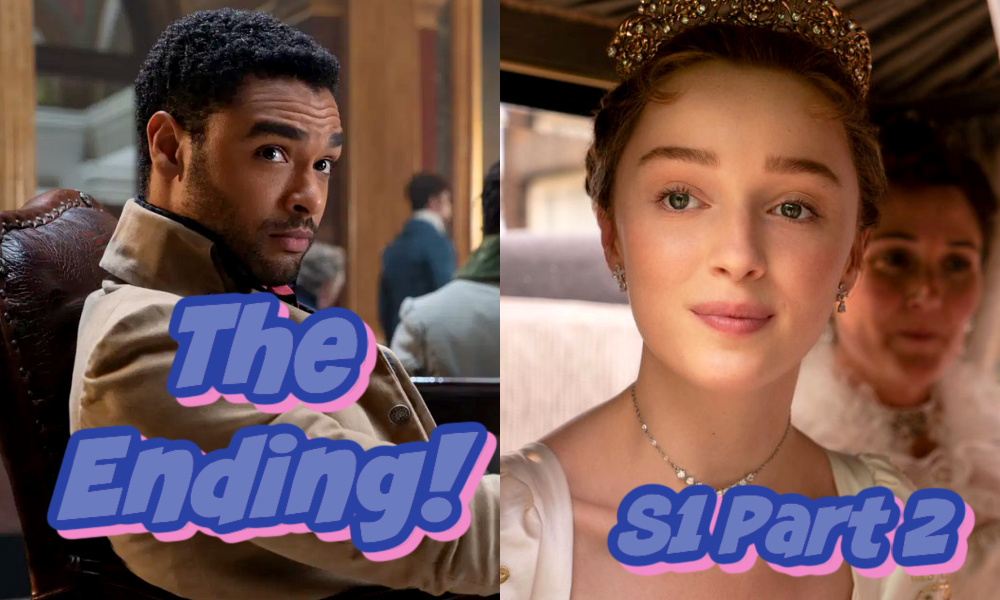 Bridgerton Season 1 was awesome and these are my instant reactions. Love, cheese, and a baby! Wrapping up the season with episodes 5-8. I was hooked from the start, but wow that ending!

Bridgerton season 1 is such amazing cheese! I love the style of the show and it went exactly where I hoped it would go. That is a good thing because it was juicy, dramatic cheese with some love, quite a bit of sex, and even a baby. Check out my reactions to episodes 1-4 and then dive into the second half. This season ended with some shocking moments! Bridgerton season 1 in all its glory, like a well-aged cheese.

This episode FINALLY did it! Daphne and Simon got married and had the most amazing wedding sex! But before all that, Simon and Daphne had to convince the Queen they were actually in love. Of course EVERYTHING Simon says is true and they finally stop being dumb. Yet the end of the episode pulls a reverse. Simon is pulling out on Daphne after sex and she doesn’t know. This drama is just beginning!

Daphne isn’t the only Bridgerton entering into marriage. Colin proposes to Marina, but still doesn’t know she’s preggers! Poor Colin. Poor Daphne. One has a pregnant lover and the other’s lover is pulling a fast one to prevent a pregnancy.

More sex for Simon and Daphne, which is awesome, but our girl still doesn’t know that Simon is pulling out. When she finds out, everything clicks for her and we have an intense sex scene where she makes sure he climaxes inside. Yes! Of course Simon and Daphne are now at odds. They are acting like children, but that just adds to the cheese of this show.

Pen is also super jealous of Colin and Marina and talks of sabotage. It looks like she’s unleashing the truth to Lady Whistle Down about Marina. Everything is about to blow up in the last two episodes! Will love prevail over jealousy? Can anyone stop the inevitable?

This episode infuriated me because Simon and Daphne definitely love each other, but are so childish! It kills me to my core. I know that’s why the show is good, but come on. Simon decides that if Daphne is pregnant then they’ll stay together, but if not then he’ll let her live her life and they’ll separate! Ugh, this is ridiculous. Then at the end Daphne gets her period. Poor Daphne. She appears all alone.

Other people have problems too. Marina is now ruined because everyone knows she is pregnant. Eloise is convinced that the seamstress is Lady Whistle Down and moves to expose her. Other sexual exploits take place in the family. Drama to the extreme and we can’t get enough of it!

Finally, Daphne and Simon stop being silly and fully come together to make a baby. Woo! They have a baby boy at the end and are now on to their happily ever after. I love this ending because it embodies this whole cheesy show. Unlike Gossip Girl, they revealed Lady Whistle Down to us! OMG, I can’t believe it’s Pen! That is definitely going to make things interesting next season.

Season two moves on to Anthony, Daphne’s brother. Hopefully he’s not as dumb as he was this season, but we know the drama is coming. Poor Colin. If only Marina had told him, then Colin would have stayed and helped her. Poor Eloise. She doesn’t know the woman she aspires to be is her best friend Pen!

I’m super excited to see where season 2 of Bridgerton will go with Anthony as our focus to be married. Unfortunately, we’ll have to wait quite awhile for the show to return. I also heard they were supposed to film seasons 2 and 3 back to back, but with COVID I’m not sure they’re able to. Make sure you check out all of our 60 second reactions to Bridgerton Season 1 with love, cheese, and a baby!