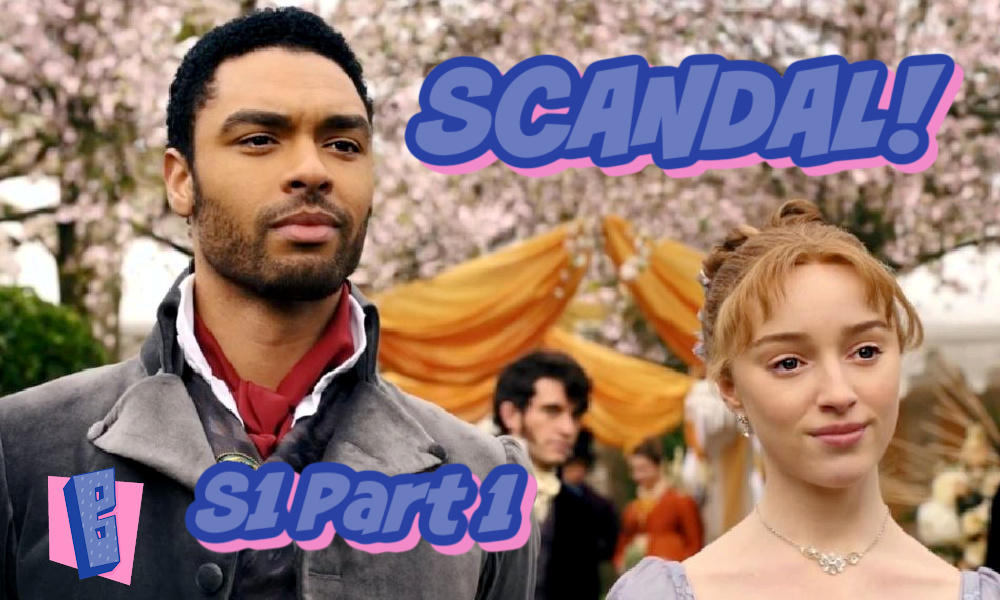 Bridgerton season 1, the new Netflix period soap opera, is scandalous cheese! This type of show is my total jam. I love the drama, the sex, and the cheese. Plus those Gossip Girl vibes. My reaction to episodes 1-4 in 60 seconds or less.

Bridgerton season 1 is a TV show that everyone’s talking about right now. It’s straight delicious cheese, and I mean that with the most respect possible. I binge watched all of season 1 and detailed my reaction for each episode in 60 second videos. Jump over to my reactions to episodes 5-8, or keep reading for the first half of this juicy season. Scandal, love, sex and tons of cheese! Bridgerton Season 1 has it all and below you’ll find our episode 1-4 reactions.

The first episode gave us some major Gossip Girl vibes. We are introduced to the Bridgerton family through our GG character Lady Whistle Down, who writes a gossip paper and spreads all that wonderful glorious cheese. Daphne is the belle of the ball and the diamond of the season according to the Queen. She is the “must” woman to marry, but her brother Anthony ruins it for her.

Daphne takes matters into her own hands, or else she’ll be wed to the ugly lord Nigel. The handsome Duke, Simon, agrees to help her secure the best possible husband. She needs to marry for love. Daphne and Simon’s chemistry is amazing! This first episode had us wanting more. The actors, cheese, and story line hooked us from the start.

Episode 2: So much Cheese!

The second episode did not disappoint! The scandals are all around Daphne. Frigging Nigel, that ugly lord, wants Daphne. Her brother Anthony promised her to him. Nigel tries to force himself on Daphne and now uses that against her!

After urging from The Queen that Daphne must have a good match, they’re able to figure out Nigel’s own secret and scandal. The maids know all and Nigel had a baby by a maid, shipped her off, then didn’t want to take care of them! Scandal for Nigel and that means that dude is gone!

This episode gives us more knowledge about Simon as well. He’s got major daddy issues, and vowed to never marry or sire an heir. But things for him and Daphne def are heating up. This second episode kept me hooked!

Episode 3 heated up the passion! The prince took an interest in Daphne, but her feelings for Simon boiled up and over. Simon shares those very sexual details with Daphne, which showed us that the girl does not know anything! Her eyes are only for the Duke, but then he goes and breaks it off!

Yes, we know this is just a show, but Simon killed us with his denial for Daphne! Yet the ending, when Daphne breaks out her swoon worthy performance, was amazing. I love how jealous Simon is. Of course he loves her, but he took his vow!

This episode is full of cheese, craziness, and jealousy! Daphne doesn’t want to move on, but the Duke gave her no choice. The Prince is interested, gives her that diamond necklace, and wants to marry her. Simon gets jealous, of course, and decides he’s leaving. But not before he follows Daphne into the garden and they passionately kiss!

Kissing a man you are not married to is a big NO in this time. Anthony sees them and needs to defend Daphne’s honor. If Simon won’t marry her then they duel! This cheese is just so delicious! Of course, Daphne wants to marry Simon and Simon wants to marry her too. But they are both being so DUMB!

The first half of Bridgerton season 1 is so fabulous. I love the drama, the cheese, and the acting. Make sure you come back for the rest of our season reactions and watch each of our 60 second videos for every juicy detail!