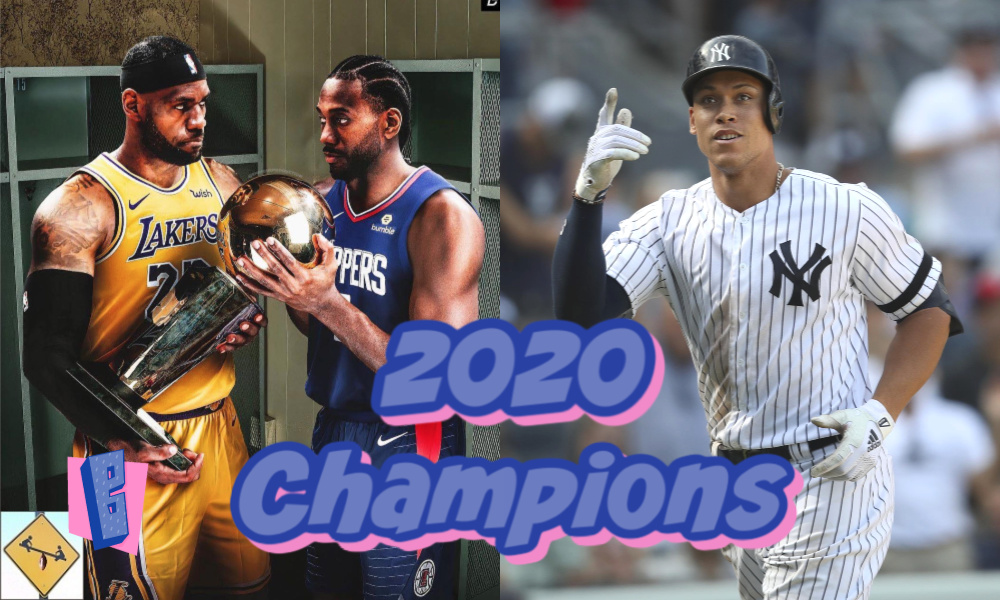 Winning a championship amid the current chaos will be a monumental achievement. What’s tainted about that? Our 2020 sports champions will be special.

Major League Baseball is trying to institute an 82-game half-season with potentially expanded playoffs in order to salvage this year. The NBA and NHL are still holding out hope that they can return. It would be for an abbreviated postseason in order to crown a champion and make whatever revenue they can scrounge. Our 2020 sports champions will be saved, one way or another.

It is hard to blame anyone for trying to force in whatever system can work. From a strictly competitive standpoint, would these alterations to the normal standard of a season impact the validity of a team’s championship? Shaquille O’Neal said exactly that the other day. He said the NBA should scrap the season because a title would be tainted anyway. Yet I’m not sure I agree. Frankly, I disagree.

The argument is pretty clear. If a league only plays half the season (like proposed MLB season), it doesn’t give the proper sample to determine the best teams. And if the playoff field is expanded on top of that, the champion can be fluky.

On the other end, if basketball and/or hockey force in an abbreviated, weird playoffs, it may offer the same, fluky champion. But even if it doesn’t, if someone like Milwaukee won the title, there would be questions about whether it would have won in a “real” season.

But would there always be questions? Would that just be an immediate, in the moment reaction? I say the latter. People forget rather quickly.

When people list Dodgers World Series titles, they don’t put an asterisk or even remember that 1981 was shortened by a strike and split into halves. Fans know the Redskins stink but used to be really good. They won three Super Bowls in the 1980s and early 1990s. I didn’t even know until I looked it up that both of Washington’s ’80s titles were in strike-shortened seasons. And what of the Spurs? Their 1999 title was strike-shortened. No one holds that against them, and it was pretty darn recent in the grand scope of things.

So there may be a group of Shaq-minded folks who immediately cry for an asterisk if any title is awarded in 2020. But after a couple seasons, or certainly after a couple decades, no one will care, if they remember at all. Play for the titles in whatever way is safe!

Is anyone clamoring for MLB to add an asterisk to the Astros’ most recent title because they were later shown to have cheated at some point? What about teams that won titles with proven steroid abusers, or deflated footballs, or a bevvy of other things that break the competitive balance of a sport? Asterisks are silly. Footnotes add context. Regardless of how champions get crowned in 2020, the titles and trophies will have been well earned and untarnished. Heck, these 2020 sports champions will have faced down a pandemic to play sports and win.

Winning amid the chaos in our world is going to be more difficult than during what was formally a normal season. But it makes sense that players, especially former players, are viewing a condensed and altered season as less than satisfactory. You are “supposed to” play X number of games to make the playoffs and then X playoff games to win a championship.

Hidden among that childish thought process is the fact that both the number of games in a season and in the playoffs change over time. We still compare generational stats and as you noted, we completely forget when a season has been shortened by strike or otherwise. So what of the four major American sports leagues?

Complaining about the NBA season is a joke, because we debated at length in January about how the entire playoff field was practically locked up already. If they began the playoffs today with the season standings as they last looked, perhaps only one team would get cheated out of an eight seed and the right to be eliminated immediately. The NHL tends to need its entire regular season to identify playoff teams, but any form of playoffs would be exciting for both the NBA and NHL.

Playing these 2020 sports championships over the summer will be unique and special, not tarnished and tainted. You don’t require a full season’s sample to know what teams are best. We know this within a month or two. That thought brings me to MLB, which notoriously sees teams atop the standings at the All-star break, only for them to fall on their face and drop into oblivion before the season concludes.

The baseball season is VERY long and sustaining your winning ways from April through September is very hard. That being said, cutting the season in half will likely give us a split. We’ll get April and May baseball, followed by August and September baseball. Those are the four best months of a previously normal season. It will be the same for everyone, so consider me excited. I just want 2020 sports, regardless of how they are played. Right now anything is better than nothing.