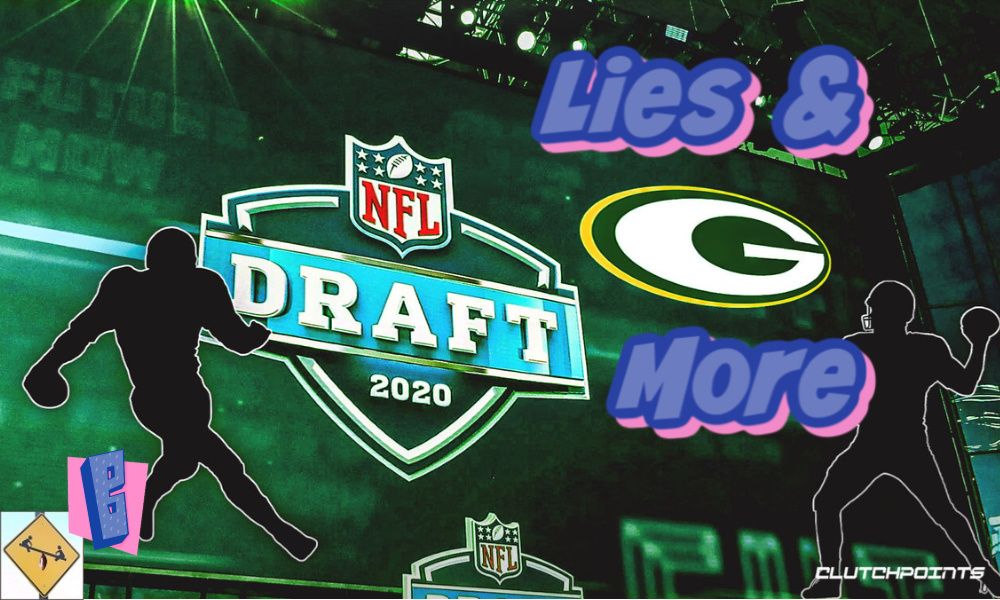 Literally everyone enjoyed the 2020 NFL Draft and if you ask the experts, almost every team did well. But that’s not the biggest lie! We must defend the Packers.

The first ever virtual NFL Draft was a smashing success. This was mostly because it is the simplest possible event to hold virtually. It was nearly impossible to mess up, and even if ESPN had messed it up, it still would have set viewership records because it was the only game in town.

Besides oddly harping on all the worst events that ever happened to the kids being drafted and calling them interesting stories (if you missed it, everyone’s dad died horrifically and/or heroically), ESPN laid heavily into Roger Goodell being awkward, and no one cared. It was sports! The 2020 NFL Draft telecast was fine!

What about the draft itself? Oddly, prior to the draft, one sourced quote really stuck with me. An NFL GM was quoted as saying the mock drafts would be [wronger] this year than they’d ever been. Welp, that was completely baseless! Nearly the entire first round was chalk. The only surprises anywhere the entire weekend were Green Bay trading up to take Jordan Love and Philadelphia selecting Jalen Hurts in round two. That was it. Sure, there were little things. Perhaps we all thought CeeDee Lamb would be selected before Henry Ruggs, but come on. Both guys went in the top 20 still. That is little stuff. That isn’t being “wronger than…you guys have ever been.”

Where do you think that level of misdirection comes from, and what’s the point? Is the anonymous GM trying to throw a double reverse jinx to hope the guys who will probably fall to him actually fall to him? I don’t understand the play by lying there.

The dumbest lie of the weekend was when the New York Giants were reportedly interested in Justin Herbert. No one believed them, and no one traded up to four to help them out. Swing and a miss. Consensus draft grading courtesy of @RNBWCV has the Giants still ending up with a solid draft, though no where near the top. The top draft grades have gone to Minnesota, Dallas, Baltimore, and Arizona. The worst grade, to no surprise, went to Green Bay. What do you make of the grading?

I find it hilarious how varied the opinions can be each year. Sure, most everyone agreed Green Bay screwed up, but even it got a B- from one publication. Indianapolis, at the other end, got all A’s and B’s, except for one D+. The Raiders had the fourth-worst draft in the league but were still given one A-. Heck, Philadelphia finished fifth-worst and received a whopping three A grades.

An NFL.com analyst gave every single franchise in the league A’s and B’s except for the Packers, who got his worst-of-the-worst, a C+. At that point, why even bother grading? And maybe that was his point he was trying to make. The entire process is pointless because we don’t know.

If Green Bay somehow buildings Jordan Love up and then trades him for a massive haul, it will look like a genius. Or if Philly rides Hurts to the playoffs after Carson Wentz goes down again, there will be little criticism. Moves that look stupid now may not be because we have no idea how these players are going to perform, virtual draft or not. It was at least comforting that that stayed the same.

NFL Draft grades serve one single purpose. They are a relatable way for the “experts” to connect with fans in a manner that everyone understands. We all went to school and were graded, so every one of us knows what a letter grade means. All of us are clamoring to learn if a team made a good decision or not, even if that fact is impossible to know in the present moment. We want to talk football, debate football, and feel even better about who is joining our favorite team. Imagine if rookie salaries were tied to how well their selection was graded by experts. THAT would make the results of the 2020 NFL Draft truly interesting.

I love how @RNBWCV combined team grades into a GPA for each team. This simultaneously provides a better outlook on how a team may have fared, while also proving the absurdity of the grading process. What I look for, beyond seeing how experts viewed my New York Jets, are the outliers. The Jets were viewed positively overall, as they should be. The Giants, your team, were met with considerably more skepticism, as they should be. New England and Green Bay are the two biggest outliers, with Philadelphia a close third. All three have tremendous track records of success in recent years. Did any of them truly botch this draft?

The Patriots are the most interesting of all, mainly because the team is going through major turnover that is new to the Bill Belichick regime. Three F grades were handed out and one belongs to New England. Of little surprise is the fact that all of the F grades and most of the D grades were handed out by only two experts, Green Bay aside. The Patriots received mostly B grades and some high C grades, but then that F to top things off. Considering that New England promptly traded the vast majority of its draft picks afterwards, while also stating that they did not intend to miss out on selecting a quarterback, I lean towards a poor score for them. If you want to pick a quarterback, then you pick a quarterback. You can’t accidentally not do it and then have a good draft.

Contrary to popular opinion, I’m not going to roast the Packers. Drafting a quarterback to replace Aaron Rodgers makes a lot of sense. They did the exact same thing when Brett Favre had some solid seasons left and it seems to have worked out very well. Rodgers needs help on offense, but his team still did great last season. He was disgruntled quite recently and may have helped usher in a coaching change. There’s no telling if he has one or five more years left with the Packers. Let your rookie learn behind a future hall-of-fame player. I like it. I would have liked one of those stud wide receivers more, but its likely the media collectively chose to roast one team. That was Green Bay.

Overall the 2020 NFL Draft was a lot more fun than in recent years. We won’t know if Vegas had more interesting things in store for us, but watching people in their homes was fun. Less filler talk was fun. The faster pace was fun. We don’t have a clue who will succeed, beyond those offensive lineman drafted in the first round. They always seem to pan out.