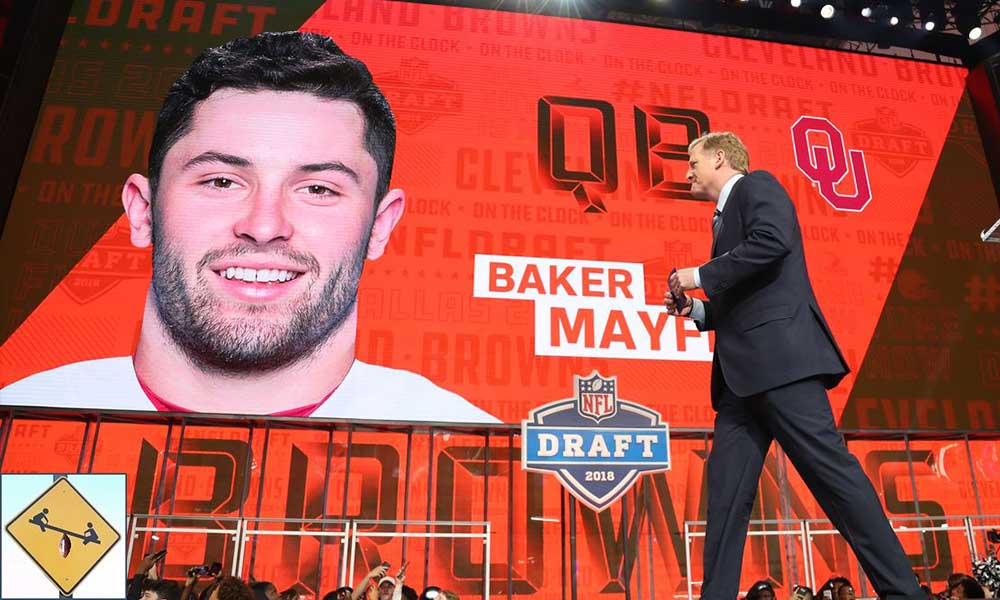 There are few short football players, but Baker Mayfield is one of them. The 2018 NFL Draft Sports Trivia Challenge is about a different famous shorty. Who said this NFL sports quote? They said what?

It’s the 2018 NFL Draft They Said What? Sports Trivia Challenge! The rules are simple. One person supplies a sports quote, either said by a sportsman or spoken about sports. Three clues are supplied as to who the speaker is, and the other person has to guess who uttered the quote.

On Thursday, during the first round of the 2018 NFL Draft, quarterback Josh Rosen was selected 10th overall. Considering his team’s struggles and his own injuries during his time in college, it wasn’t an outlandish spot to see him taken. Nevertheless, Rosen said in an interview after the fact that he was pissed and nine mistakes were made before Arizona took him 10th.

Todd Salem: Players getting a chip on their shoulder is nothing new. The chip develops from logical or illogical means. It hardly matters. If Rosen had actually been taken first overall, maybe he would have been angry if some people questioned the selection. The chip always gets there one way or another. Which brings us to our sports quote.

With so many chips over the years, it could be tricky to name that disgruntled player. Here is a quote that offers a few hints within its own context. Who said it?

“It’s my whole life of being the little guy and having a little chip on my shoulder, from year to year trying to prove myself, and at the end of the day to be inducted into the College Football Hall of Fame is a very special honor for me.”

Hint One: Besides playing college football (and making that Hall of Fame), he also played in the NFL.

Second Hint: Being the little guy was notable. This player’s size was often a talking point.

Hint Three: Though he played a dozen years in the NFL, he never won a playoff game.

Who said it? It’s the 2018 NFL Draft Sports Trivia Challenge!

Damn is this a good quote and a solid challenge for our game of They Said What. I’m not sure Rosen is the only one who left the 2018 NFL Draft with a chip on his shoulder. Lamar Jackson comes to mind, among others. As for this quote, there are a few trains of thought towards the answer.

For some reason I thought Russell Wilson as I read the quote, although I know that’s wrong. This is a former NFL player with a 12 year career. It feels like a quarterback’s quote, although it doesn’t have to be. I would give running back consideration as well. The man was short, but the experts were calling Baker Mayfield short this year and he truly isn’t noticeably small. This man must have been in NFL terms.

My guess is former Bills quarterback Doug Flutie. He was short, if memory serves, and was definitely deserving of the college football Hall Of Fame. Considering he played for the Bills, it’s likely he never won a playoff game. He is the only short player I can think of and it took a long time for me to even come up with him as a viable guess.

Well, that viable guess was also a correct guess. Flutie was the speaker. I guess there are fewer short chips on shoulders than I assumed. Flutie, interestingly, is 5’10”, which is “very” short for an NFL quarterback but not for real life. He is only two inches shorter than Mayfield, who clocks in at 6-feet even (depending on who you ask). Russell Wilson, for what it’s worth, is listed at 5’11”, but he certainly has a few playoff wins, including a Super Bowl championship, under his belt.

BOOM! Nailed it. Mandi got it as well with an added hint. I told her that the player had a breakfast cereal named after him and she knew exactly who I was referring to. Flutie Flakes!