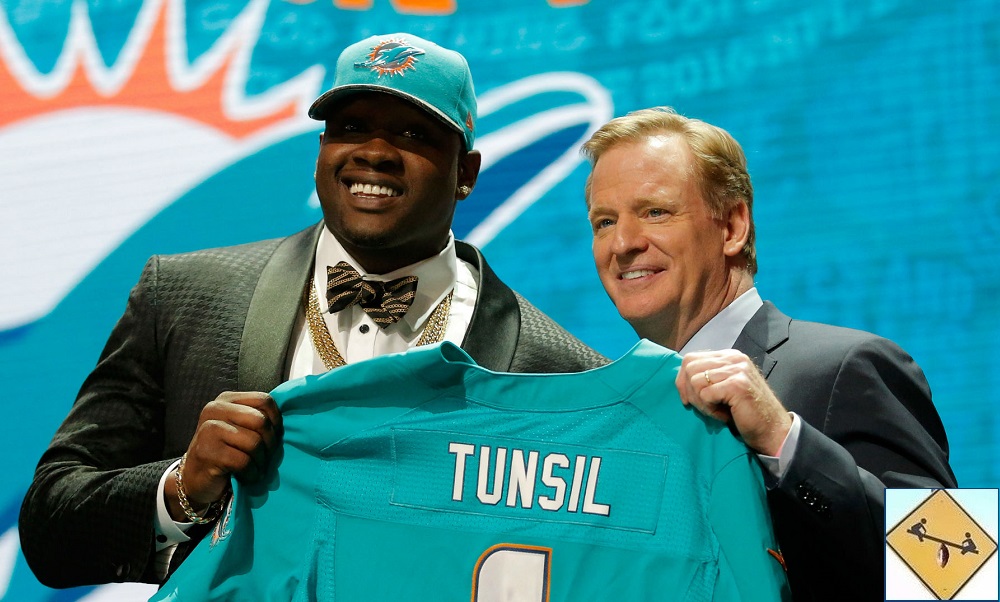 Tons of surprises flooded round one of the 2016 NFL Draft, but three players stood out as they plummeted down the board. Falling stars lead to regret.

We witnessed a wild first round in the 2016 NFL Draft. It began before the draft even began, with the first and second overall selections being dealt. We had a number of other trades on draft day itself, including deals involving the Tennessee Titans and Cleveland Browns once again.

We had the Super Bowl champions trading up to grab their quarterback of the future. We had the San Francisco 49ers trading up to take an offensive guard who surely would have been on the board when their next pick came up anyway. We saw a slew of defensive backs get drafted and then a slew of wide receivers.

But the biggest and most interesting news of the day involved the slippage (or lack thereof) of three players with questionable off-field credentials. The movement of those questionable players was the biggest story in the draft, and it was fascinating to follow.

Offensive tackle Laremy Tunsil was the likely number-one overall pick just a few weeks ago. He fell to 13th overall after videos leaked of him smoking with a gas mask on. Then there were texts claiming he took illegal money at Ole Miss, the latter of which he admitted to during a press conference following his selection.

Robert Nkemdiche was preparing for a similar draft fall because of his issues off the field. But instead of falling out of the first round like most expected, he was taken 29th by the Arizona Cardinals.

The final questionable player that made waves through round one was Myles Jack. He had no personal issues, but teams were terrified of his knee that caused him to miss all of his final collegiate season. There seemed to be smoke screens and smoke screens for those smoke screens heading into day one. No one was sure whether teams were actually worried about Jack or whether he would be taken in the top five of the draft. It was apparently the former. Jack fell out of the first round entirely and is still on the board as we head into day two.

It was an amazing set of circumstances for this batch of players. Each guy has no literal connection to the others in any way, but their grouping in the same class made for intriguing television. Do you agree with where these guys went?

We discussed and had assumed someone would take a grab at Nkemdiche in round one, but I had no idea the falls for Tunsil and Jack would be coming. The former seems like crazy overreaction. If Tunsil had done this stuff weeks ago, perhaps the process would have dropped him down and then risen him back up by now. For the latter, it’s just unfortunate for the young man. Someone will take the chance in day two.

The difference between first round money and second round money is so large that I can understand teams’ apprehension to select all three players in round one. That being said, all three are first round talents and its likely that passing on them will come back to haunt the league as a whole.

I hate to lump praise on the Dolphins, but Miami got a steal at thirteen by drafting Tunsil. He passed like six drug tests in the last several months, so the video of him smoking is old. It’s from college and there isn’t a single person who doesn’t have things from college they’d rather not let others know about. Tunsil got grilled by Deion Sanders following his selection by the Dolphins, and to his credit he handled it perfectly. I was extremely impressed with his poise and ability to deal with the pressure.

Two other teams selected offensive lineman earlier in the draft, the Ravens and Titans. I realize this draft had three top offensive lineman, but Tunsil was easily the best of the bunch. Character is important, but so is context. Baltimore and Tennessee may soon regret their decisions.

The fall of Miles Jack out of round one surprised me even more than the slight tumble taken by Tunsil. What changed in the last week or two so dramatically in regards to his injury? I’m skeptical of whether he truly needs another surgery. He is in full rehab mode right now, but everyone has known this for a long time. I understand the risk versus reward argument, but Jack is well worth the risk. It’s not like he just got himself injured. He was hurt months ago and is well on his way to being fully recovered.

As for Nkemdiche, he went right where we both expected. Off the field issues make any player hard to take in the first half of round one, but should never drop them fully into round two. What’s funny is that none of the players who unexpectedly fell were quarterbacks. Paxton Lynch went late in round one as expected, just to a team no one saw coming. Usually its the quarterbacks who are highly touted and projected near the top of the draft, only to slide and slide as teams fear the stigma of a “First Round QB” and the pressure it brings. Not so this year. Not so.