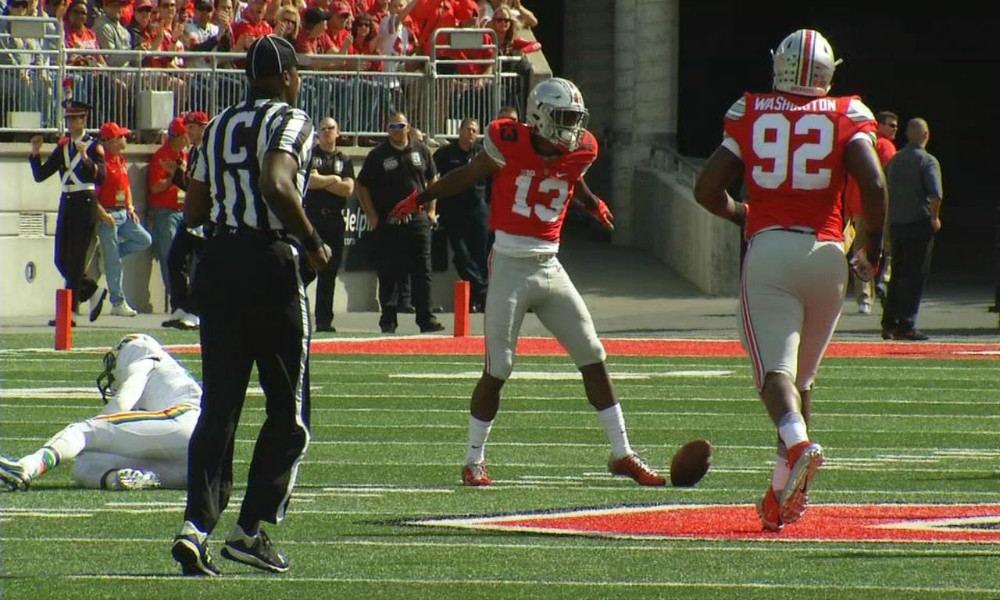 The New York Giants would be picking 10th overall in the 2016 NFL Draft. They had their eye on a number of players, while also surely keeping a wish list of players they hoped would fall to them at that spot. Could things work out perfectly for New York? (Photo Credit: myfox28columbus.com)

The picks were coming in fast and furious. Okay, maybe not fast exactly. And I suppose there was nothing furious about the activity either. But suspense was certainly building! That much we can be sure of. Nine picks went off the board before the New York Giants were on the clock at ten in the 2016 NFL Draft, and things were falling almost perfectly.

ALSO ON BUZZCHOMP: Keanu is a Key & Peele Original… right?

Laremy Tunsil, the top offensive tackle in the draft class and, up until just a few weeks ago, the majority of mock draft’s pick to be the number one overall selection, was still on the board. Teams were getting scared away because of off-field antics, including a video of Tunsil apparently smoking, which was posted just minutes before the draft got underway.

ESPN deems him “one of the elite prospects in this class, Tunsil has the makings of a franchise left tackle for the next decade.” CBS Sports had him as the number one overall player.

Myles Jack, the top linebacker and arguably the top defensive player in the entire draft, was still on the board. Teams were getting scared away because of a knee injury that caused him to miss all of his final season at UCLA. Without the concern that he might need further surgeries, Jack would have been gone within the first five picks of the draft. Now, he was slipping to the Giants at ten, as was Tunsil.

CBS Sports said of Jack that he “might be the best player in the 2016 NFL Draft.” It had him ranked as the number four overall player on its prospect board.

There was a minor hiccup when the Chicago Bears traded with the Tampa Bay Buccaneers to hop from 11th to 9th (hopping right past the Giants and no one else) to grab pass rusher Leonard Floyd. New York had had its eye on Floyd this whole process, but no matter. After all, we surely didn’t expect this batch of players to still be available.

Days before, reports surfaced that said Myles Jack would be off the Giants’ board at ten. They wouldn’t consider him. But surely that would come up for debate if he was there when the time came to actually make the pick. New York also gives off the air of not wanting trouble-makers, so they would likely avoid a player of Tunsil’s ilk. But surely that too would be talked about if, for some magical reason, he was available at ten.

I suppose, worst-case scenario, the Giants take cornerback Vernon Hargreaves, a player they had been linked to and a guy who was the clear second-best defensive back in the draft after Jalen Ramsey. CBS Sports ranked Hargreaves exactly 10th, a perfect value for where the Giants were selecting. It wasn’t an area of need per se, but that’s what worst-case scenarios are for.

New York’s pick is in! Commissioner Roger Goodell is making his way to the podium. What good fortune; the Giants had their pick of the best defensive player or the best offensive tackle. How could things have fallen any better? This was a miracle draft!