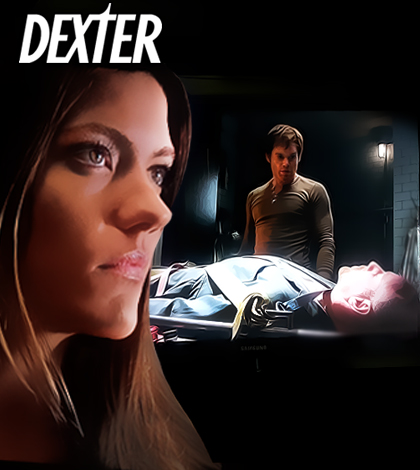 Dexter, Dexter gimme the the news…I got a bad case of watchin’ you!  We open to Deb at home with her usual beer in hand preparing her bath. Soon after, she dozes off into a creepy fantasy, bathing in a tub of blood as Dexter appears in some fancy duds and proposes to her. W-Whaaat?  Not sure where the writers are going with this but I got a feeling Dexter’s going to pull a Greg Brady with Deb soon….”Ya know, Marcia’s not my real sister”.

Psycho-macho man Spelzter is arrested and later released due to a foul up by the bumbling Miami Metro. Meanwhile, Ukrainian mob boss Sirko and his henchmen have Dexter in their sights. Quinn continues his raid on the Foxhole while dating one of the strippers. Yer killin’ me Quinn!

Deb stills struggles with Dexter’s big secret as she hits him hard with a heavy guilt trip down memory lane.  After blaming him for Rita’s death and endangering the life of his son, Dexter insists that he’s in control. Sure ya are Dex. Later Hannah McKay pays Dexter a visit at the always fast food and sweat scented police station. Why? So the writers can conveniently setup a new love interest for Dexter. I wonder if Deb will get jealous.

Sirko executes his power and gets his bartender to kill himself in an attempt to distract Miami Metro. However this staged suicide isn’t fooling the wise Batista. Dexter gets his chance to execute Spelzter again but is overpowered by his brute strength. Once conscious, he wakes to a magnificent Spelzter made death maze. Dexter gets a taste of his own medicine and barely gets out alive.

In the end Dexter outwits and kills the big, bad Spelzter. But his revenge is bitter sweet as he bids farewell to his priceless slide collection cremating them along with a deceased Spelzter. Dex is greeted by sister Deb outside as they watch Spelzter’s ashes fill the moonlit sky. How romantic. Sheesh!