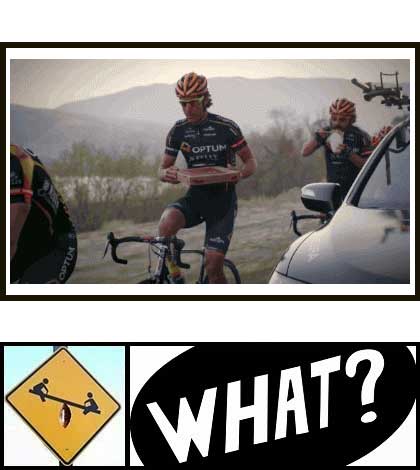 Description: Is this cycling team on the cutting edge of a new wave of sports nutrition? For years, we have endlessly heard about eating well and what that does for an athlete. It prolonged Steve Nash’s career by five years; it helps players this century stay active in their sports for much longer than athletes of the bygone era…or so we thought. Maybe we were wrong. Maybe fruits and vegetables aren’t the way to go. Who knows? I mean, people still debate about whether eggs are good for you. Why not Chinese food?

You tell me, what ha… happened?

Okay… wow. My first thought was why is this cycling team riding so close to traffic. This was followed by hmm, that man is eating pizza. That’s an interesting choice. Then I saw the can of whipped cream and finally… the Chinese Lo Mein!

I believe the two folks in back are devoid of snacks. Poor form, poor form. So what happened? How and why did this team of cyclists bring their favorite foods for what can only be described as a self indulgent ride?

These men all know its best to just get up and ride, get right out of bed and go exercise. Its early morning and they all hopped on their bikes for what was to be a long ride. Two or three hours is too long to wait for breakfast… why not bring it with you? This is genius. A few of their favorite things came along for the morning ride. Personally I’d bring whipped cream as well.

That’s what happened. As to your erroneous conclusions about healthy eating, athletes can certainly get away with more. They need to eat a lot more calories than regular folk, but that doesn’t mean it should be crap. Everyone needs to eat things that are good for their body. This is called common sense and I take it as a personal affront that you would toss it to the wind so haphazardly. Not on Friday. Not cool.

[Credit Reddit and its community for this great GIF]