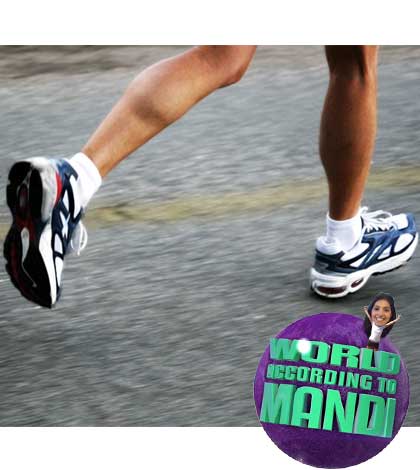 There was a moment in my life four years ago when I literally couldn’t run. I call it a moment, because as we get older months really are just moments. I wasn’t injured, I was sick.  I’d try to run and I couldn’t breath.  My chest was on fire, my heart raced, and my body wouldn’t let me run.  I’d never gone more than a week of my life without running, but for more than six months I couldn’t. I kept trying unsuccessfully to run.

Then all of a sudden that moment had passed and new one was upon me. I wasn’t sick anymore and I could run again. Oh boy, I had work ahead of me! Learning to run again was one of the hardest things I’ve ever done. Physically, my body had been through a trauma, and mentally I’d been through one too. Silly me wasn’t quite ready to recognize it, but I knew in every fiber of my being that I was born to run!

Well I’d hit on something big; we’re all living, breathing running machines! A friend of mine let me borrow his copy of Christopher McDougall’s book entitled Born to Run.  I’d heard of it, wanted to read it, and now it was in my hands.  Woo! I was instantly hooked on McDougall’s dive into the underground world of ultra runners, rooted in a reclusive Indian Tribe who just runs everywhere. We humans are uniquely built for endurance running and I was riveted! That’s right; anyone who says they can’t run is just lying to themselves. Running is in our blood, its how our species survived, and continues to do so over so many others!

McDougall’s book reasserted what I knew about myself, but also inspired me to go further.  I’ve always wanted to be able to just run, regardless of the distance. No limits! That’s what he did on his journey, running farther distances than most people do in their entire lives. He did it with friends and without injury.  It’s the way of life! The people he met came from all walks, with different running abilities, both young and very old. They run because they can, because they love it and because running sets them free. McDougall showed just how strong our bodies are, that our species is not made to live a sedentary lifestyle. Our legs are made to move, so we better move them or else lose the ability to do so.

Born to Run reminded me how much I love to simply run.  I know I can keep pushing myself farther and faster because it’s what our species has always done! I decided back during that moment, when I was too sick to run, that I would never stop running again. So don’t let your mind tell you that you can’t run! Don’t get fooled into buying an expensive pair of running shoes that will revolutionize your life.  Just run whenever you can, wherever you can and however far you can go. Trust me.  You do that and you’ll be set free, running for life just like all those runners in McDougall’s book. We’re born to run people!