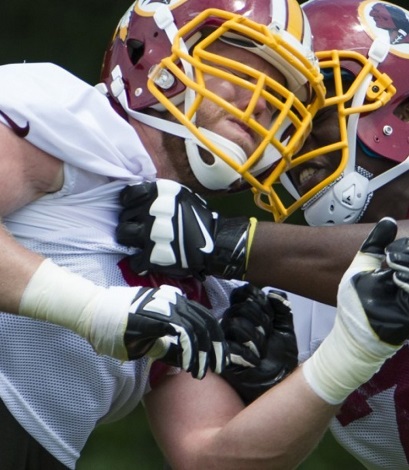 Whether you’ve been a Washington Redskins fan for only a few years, or for over 50 years, this moment in time could be the worst we have ever experienced. A quick look into the team’s most recent history will better explain.

Needless to say, the feeling of pessimism by fans is warranted. So is there anything about the 2015 season that Redskins fans can feel good about? Well, optimistically, it could mark the start of a restoration. Let’s review what the Redskins have done since the end of the 2014 season, where they finished last in the NFC East, with a 4-12 record.

Almost immediately after the season, the Redskins hired Scott McCloughan as the team’s general manager. He became the team’s first real general manager since the firing of Charley Casserly after the 1999 season. In that year the ‘Skins finished 10-6 and were a field goal away from making the NFC Title Game, losing to the Tampa Bay Buccaneers 14-13 in the playoffs. McCloughan served in the player personnel office of the San Francisco 49ers and the Seattle Seahawks, and was instrumental in building the successful Seahawks teams of 2013 and 2014.

ALSO ON BUZZCHOMP: Sports Quote Game. Can you guess who said it?

Perry Fewell replaced Morris as the Defensive Backs Coach. Starting his 18th season in the NFL, he previously served as the Defensive Coordinator of the New York Giants (2010-2014), which finished with the second most takeaways (160) in the NFC and third-most in the NFL last season.

Finally, Matt Cavanaugh was selected as the Quarterbacks Coach. Head Coach Jay Gruden and Offensive Coordinator Sean McVay shared the responsibility in 2014. Cavanaugh has developed an impeccable reputation as a quarterback guru, after serving as Quarterbacks Coach for the Chicago Bears, New York Jets, San Francisco 49ers, and Arizona Cardinals. He also served as Offensive Coordinator for the Jets and Baltimore Ravens. He was a back-up quarterback with the New York Giants when they won Super Bowl (XXV) and was a back-up QB with the San Francisco 49ers when they won Super Bowl XIX.

The selection of Cavanaugh, Callaghan, and McCloughan are considered to be the best moves the Redskins made since the end of last season.  Why? Robert Griffin III, that’s why.

If the Redskins are to have any chance of being competitive, Griffin needs to have a good season. So Callaghan was brought in to improve the offensive line to protect Griffin, Cavanaugh was hired to improve Griffin’s mechanics and quarterback skills, and McCloughan was tapped to get the players Griffin will need to be a successful quarterback in the NFL.

The Redskins defense was not very good in 2014. The defense was ranked 30th out of 32 teams. They were 24th in pass defense, 13th in rush defense, and 29th in points allowed.  They also had problems minimizing third down conversions (89/207).

McCloughan concentrated on the defense during free agency when he signed cornerback Chris Culliver from the 49ers, safety Jeron Johnson from the Seahawks, defensive linemen Ricky Jean Francois from the Colts, Terrance Knighton from the Broncos, and Stephen Paea from the Bears. He obtained safety Dashon Goston via trade from Tampa Bay. But finding a reliable offensive right tackle has been a priority for a few years. The team let former right tackle Tyler Polumbus go in free agency, after he lost his job to Tom Compton during the 2014 season. Outside linebacker Brian Orakpo was also lost during free agency.

In the draft McCloughan collected a mixed bag of offensive and defensive players.  The team selected Brandon Scherff in the 5th slot of the first round. Scherff was selected to finally provide a solution for the right tackle problem. He was considered a top offensive line prospect from Iowa University, and is expected to start. Preston Smith, a defensive end/outside linebacker from Mississippi State, was selected in the second round. Coaches say that he will rush from the outside linebacker and D-line positions.

Depth at running back was enhanced with the pick of Matt Jones of the University of Florida in the third round. Coaches like his size; he’s 6 foot 3 inches and weighs 231 pounds. In OTAs and mini-camp Jones has shown that he can catch passes, is a good blocker, and runs hard. He is projected to be the third down back. Jamison Crowder, wide receiver from Duke, was selected in the fourth round. He has good speed, good hands, and is a good route runner. It is expected that he will be the slot receiver and will return punts and kickoffs.

McCloughan also used the draft to enhance special teams, and most of the team’s picks are expected to perform on that squad right away. Draft analysts on the whole gave the Redskins a grade of B for their 2015 draft. Draft guru Mel Kiper Jr. gave the Skins a grade of A-.

Ultimately, how the Redskins do in 2015 depends on Robert Griffin III. During the 2014 season he displayed problems with his mechanics, getting through his progressions, reading defenses, and getting rid of the ball quickly. It is hoped that under the tutelage of Cavanaugh he will show rapid improvement in all of these categories. He has looked sharp during OTA’s and mini-camp, and coaches expect further improvement during training camp.

The defense will help, and is expected to play with a lot more aggression this season. This should result in many more sacks for Jason Hatcher, Ryan Kerrigan, Trent Murphy, and Preston Smith. The defensive backfield should play better with Culliver, Goston, Johnson, and Duke Ihenacho, a safety the Redskins signed from the Denver Broncos just before the start of the 2014 season. He didn’t play much last season because of injuries. The Redskins also expect continued improvement from sophomore cornerback Bashaud Breeland, and third year corner David Amerson.

As far as the remainder of the offense is concerned, expect large doses of rushes by Alfred Morris and Matt Jones. The DeSean Jackson and Pierre Garcon to Robert Griffin connections should improve. Coaches will target Garcon a lot more than they did last season.

A record of 7-9 should be considered a good finish for the Washington Redskins.