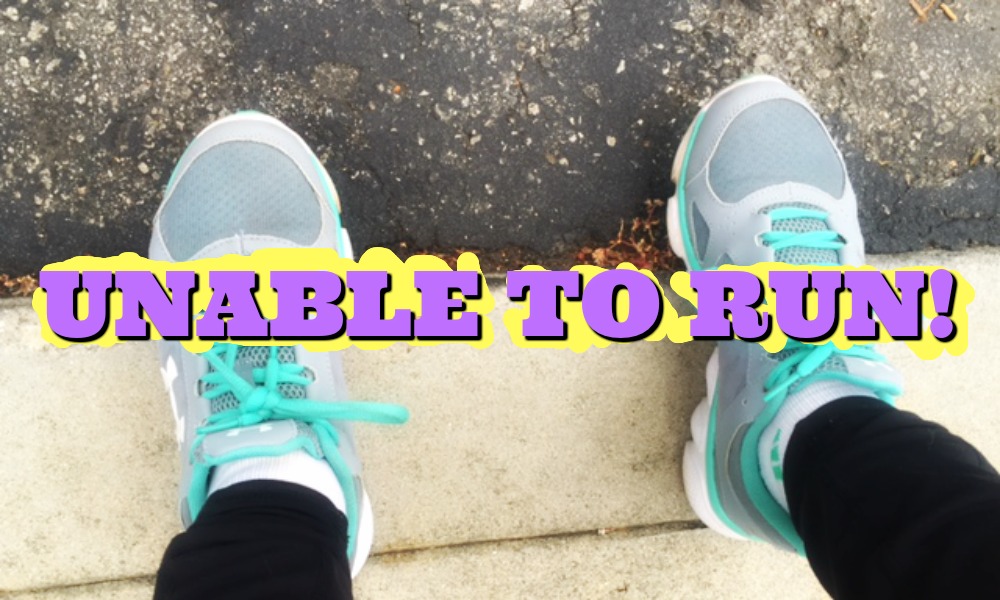 It’s been a very long time since I’ve been unable to run, then bam! Last week I injured myself hiking. It seemed fine, so I ran on it the next day. Lesson learned, because I was hobbled for five days. I’m a running chick and this is my diary.

I injured myself hiking, but the funny part is that I barely remember doing it. I woke up the next morning and my foot hurt, but it wasn’t a debilitating pain or anything like that. I continued on with my regular scheduled workout of yoga and thought little of it. What happened next was just sheer hubris kids. On the second day I woke up and my foot hurt more, but I decided I was going to run. I love running! Nothing can stop me, or so I thought. Afterwards my foot hurt even more, but I continued on with my day. I didn’t ice it and walked around for far too long that afternoon. I came home and felt some pain, but figured I could just sleep it off.

That night I woke up in EXCRUCIATING pain! I tried to get out of bed and I could no longer walk on my foot. I ended up waking up my man as I crawled across the floor to get an ice pack. I couldn’t make it to the kitchen, so he helped me get ice and a pain reliever. I then realized that I’d seriously hurt my foot. Whatever injury I’d sustained got worse and had put me on my butt, quite literally. My foot was in pain all night while I tried to sleep and when I woke up the next morning, I definitely was not going for a run. I was physically unable to go running.

I can’t remember the last time I couldn’t exercise because I was unable. That morning I was super bummed! I realized I should have taken care of myself the day before by skipping my Sunday morning run and icing my foot. My ego got in the way and I learned a tough lesson. I spent the next three days in a lot of pain and I needed to stay off of my foot. I was incredibly bummed that I couldn’t run and humbled from the experience.

All in all I spent three days not exercising and four days not running. I know that’s not a significant amount of time, but it sure felt like it to me. I rarely take a rest day, let alone more than one. I love to get up and run every morning. It’s one of my favorite ways to start my day and I feel slightly incomplete without it. The injury especially stunk because I didn’t hurt myself running, nor was it even a big thing at the time. I stumbled and hit my foot on a rock, then continued my hike.

I learned a big lesson through my injury; sometimes I NEED to take it easy and that’s okay! I shouldn’t feel as though I need to run through an injury, nor is it a good idea. I never gave myself a moment to rest, and because of that my body forced it on me. I never been unable to stand on both of my feet before, and I can’t remember the last time I was in so much pain. I’m glad that I rested for those three days! I’m definitely going to be more careful with myself in the future and I won’t forget that it’s okay to take it easy!

I’m so glad to be back running, and even though I only missed a few days, I never want to go through that again! In the grand scheme of my month and year it isn’t a big thing, but damn kids, being hobbled and humbled is difficult. I hated being unable to run! But it’s not a bad thing to recoup from an injury. We always come back stronger.

I’m glad I was reminded to take care of myself. Let me know your injury stories and if you’ve been sidelined from running in the past. Comment below and keep on running!

Next Post: Get Up and Run: Diary of a Running Chick!