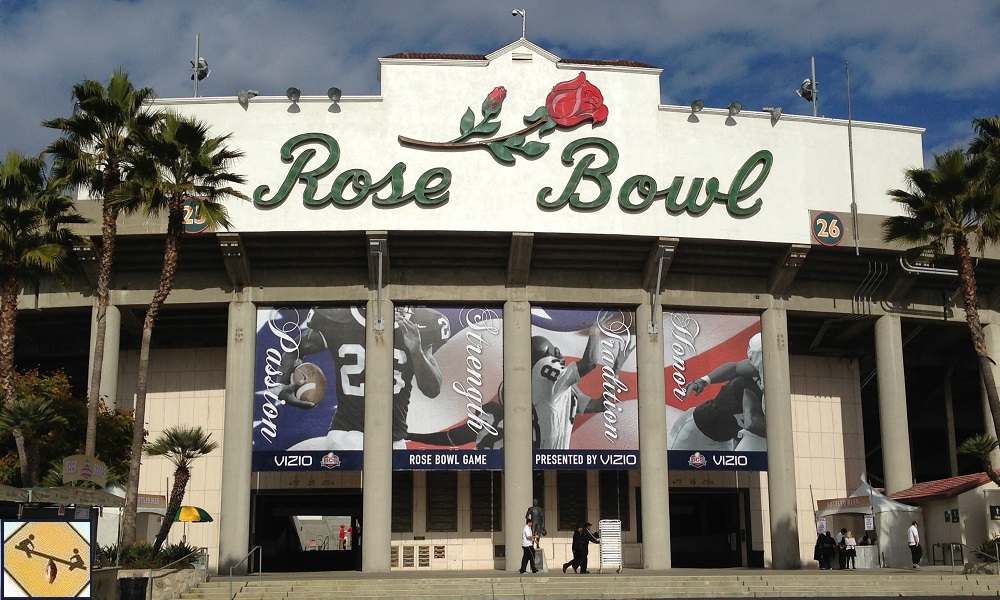 These are the Top 5 non-playoff bowl games to watch out of 41 total college football bowl games. Pace yourselves and don’t miss these five matchups.

We have reached the end of the college football regular season, which means we are entering bowl season. The first bowl game kicks off December 17th. No one should rightly care who wins these irrelevant bowl games, but for some reason, they crush the television ratings each year anyway!

Are there any meaningless bowl games you are interested in prior to the College Football Playoff? Of course there are! I’ve got two great games to start with.

This game is interesting, but more it’s just an excuse to talk about the incompetence and hypocrisy of the CFP committee. The point of the committee is to rank the teams it feels are best. That means record, conference titles, head-to-head wins are all factors but none are deciding factors. If we just went by a specific formula, we would be back to the BCS system.

So if the committee is supposed to be more nuanced, why did Oklahoma State get screwed over all year with its “loss” to Central Michigan? Everyone knows the referees in that game erred, gave CMU an extra play that should not have existed, and OSU won the game if not for the refs misunderstanding how the rules worked. Yet the committee just marked that game as an OSU loss anyway and never considered the Cowboys for the playoff. They ended up losing to Oklahoma anyway, making the point moot, but a 10-1 Oklahoma State team playing for its conference title should have been in consideration. Instead, the committee treated the Cowboys as 9-2 with a bad loss that was incorrectly levied against them and essentially skirted its only responsibility: determining nuance that a BCS computer would not be able to do.

I really want to see Western Michigan play somebody. The Broncos went 13-0 this year, but I would be surprised if they beat Wisconsin. This reminds me of Boise State from last decade, where we were trying to determine if those Broncos belonged. I’m dubious of these Broncos belonging, but a Cotton Bowl win would prove me wrong.

As always with bowl games, there are some important factors to remember. The prestige of the game and the teams matter. A “worse” team who is elated to make a game is more likely to come out with energy than a “good” team that feels let down by its assignment. Teams during bowl season also have to deal with coaching changes, opponent schemes they have never played against, and playing in cities that are way more fun than their school’s home town. A bowl win, when it’s not about overwhelming talent disparity, is all about motivation.

Take the Rose Bowl as an example. Penn State may be happy to play in the Rose Bowl, but the Nittany Lions may also feel like they deserved to make the playoff after beating Ohio State and winning the Big Ten. Even a small letdown would open the door for a talented USC squad to win a game it is very happy to play in.

College Football Bowl games are all about tradition and holiday rivalry playing out on national television. The next best thing to playing for a championship is playing for bragging rights, and that is all that’s on the line during Bowl season. The Playoffs aside, there is something fun about meaningless games garnering so much meaningful attention. You named two excellent bowl games to watch, but I’ve got three more for you to round out our top 5.

Not only does this football game feature the likely Heisman Trophy winner, quarterback Lamar Jackson of Louisville, but it pits two top 25 ranked teams that each had playoff hopes dashed during the season. Louisville obviously held an actual playoff spot late in the year, but even LSU was considered a contender early in the season. They have a new head coach and Ed Oregeron should not be missed. The interim coaching tag is gone and LSU is officially Ed’s team.

Oregeron brings a fire to this matchup as LSU’s man in charge. Every coach wants to win their first bowl game at the helm, especially after getting the official promotion to full-time head coach. But our likely Heisman winner wants to go out on top as well, meaning both teams have extra motivation in an otherwise meaningless matchup. I’m excited for this one.

This is probably the best non-playoff Bowl game of all. I absolutely love the Rose Bowl. I love its tradition and I love its parade and I love that USC gets to defend its home turf against the best non-playoff team in the country. Penn State had a great season, but with one extra loss on its record they came up short of the playoffs. I’m sure the Rose Bowl feels like small consolation, but tradition dictates that the Big Ten champion plays in this game. They had to earn entry and fans all win because of it.

Number five Penn State versus number nine USC would be great no matter what. But for the Rose Bowl its pretty awesome. After all of the controversy that Penn State went through, its good to see them rebound and dominate. They are a classic team, much like USC, that nearly all of America can pick sides on. As a local of Los Angeles my allegiance is with the Trojans, yet they’ll need everything they have to win this trophy.

I always find the Florida Gators fun to watch and Iowa has been exciting all season. This is an even matchup between two teams that were both a step behind our playoff teams this year. The Gators beat LSU, but lost to FSU, Tennessee and Alabama in terms of ranked opponents. Iowa defeated Michigan and Nebraska, but lost to Penn State and Wisconsin. This is a clash of styles that will be fun to watch.

Although Florida enters this game as the ranked team, I give the edge to Iowa. After they dismantled Michigan, I believe they have enough to stop the Gators. But with this game being played in Tampa, it’s practically a home game for the Gators. That may even the playing field, hopefully making for some exciting football.


The playoff games may get all the glamour, but these five college football bowl games should not be missed. There are a ton of bowl games, forty-one to be exact, so pace yourselves. Watch these five and then cherry pick from the rest.