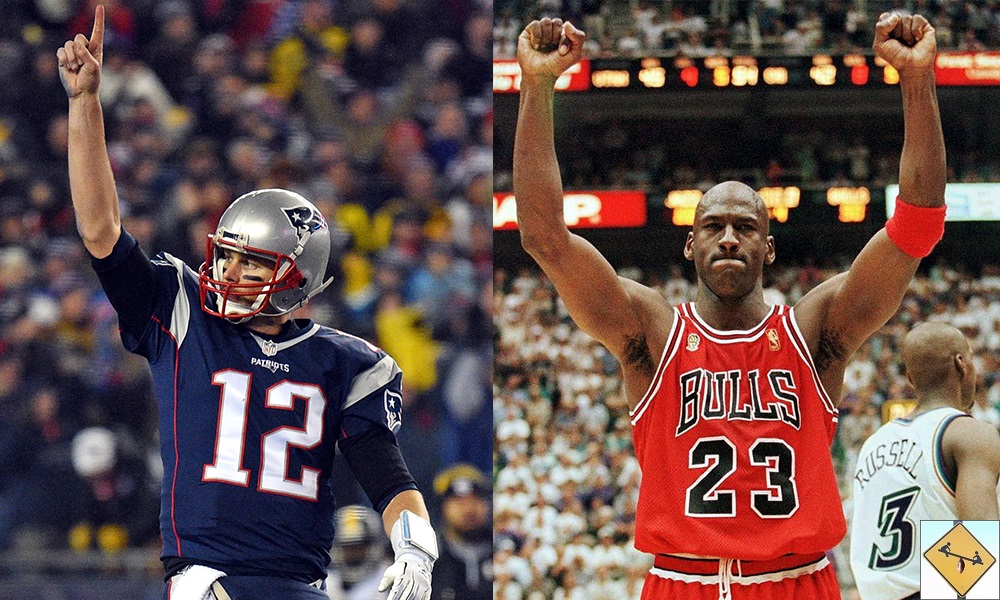 Tom Brady and Bill Belichick are now the greatest NFL player and coach combination, but are they best in all sports? Can they top Michael Jordan and Phil Jackson? Who’d you rather have?

I think we have safely reached the point where Bill Belichick and Tom Brady are the greatest coach/player combination in NFL history. I’m not even sure who else would be in the discussion for second place on such a list. Maybe Vince Lombardi and Bart Starr, but they played in such a different era. It is hardly comparable.

With that said, there are some combos in their peer group, we just have to travel to other sports to find them. So, for the ultimate Who’d You Rather, which pairing would you rather have as an owner or fan base to lead your team?

Based on the numbers alone, Auerbach and Russell obviously win, but I’m not sure of the level of difficulty of the NBA back then. The league was much smaller. There was no desire for parity or free agency or all the things that have infiltrated our sports leagues since then. They set the example, but there is a part of me that feels as though half a dozen or so rings in today’s day and age is more impressive than nine back then.

I relate it to Geno Auriemma in women’s college basketball. The game is still very stilted and divided. There are so few opponents who even challenge UConn because of the relative youth of the sport at this level. His accomplishments are impressive, but the degree of difficulty must be considered.

I also feel like winning a lot in basketball is less impressive at its core. An entire game can be decided by one player. Perhaps you give said player credit for that, but that makes me think more highly of the baseball and football success stories. If Torre and Jeter had been together longer, I would have leaned that way, but Belichick and Brady are going on 17 years with no end in sight. That is just amazing. And the fact that they are finding constant success in a sport where the entire 53-man roster is supposed to be vital is confounding. They are my pick, grudgingly.

Brady and Belichick just won their second championship in the last three years, giving them two mini-dynasties at the bookends of their sixteen year reign atop the sport of football. Their entire time together has been a dynasty, but winning multiple titles in bunches puts the duo atop the NFL and firmly into this conversation of greatest player and coach combination. I understand why you handed them crown, but I must disagree.

Our five nominees are all incredible in their own right, but I can easily eliminate several pairs. Auerbach and Russell have the sheer numbers and nine titles in ten years is insane, but no one ever puts them ahead of Jackson and Jordan. I can’t either, so they are eliminated from this conversation. The same is true of Popovich and Duncan. While their dynasty was incredible, it’s not viewed as most impressive within the sport of basketball. Not to discount what any of these men have accomplished, but Jackson and Jordan reign supreme over the NBA.

I must begrudgingly eliminate Torre and Jeter as well. Three titles in four years was awesome, but the only way they carry the same weight in terms of legacy is if they’d have won again later. Jeter got another World Series ring in 2009, but not with Torre in the dugout. Therefore I’m left with Brady and Belichick or Jordan and Jackson. You seemed to glaze over the greatness that was Phil Jackson and Michael Jordan. Did you forget how competitive the league was back then? Multiple teams made serious runs at the NBA championship and the Houston Rockets stole the show the moment Jordan left for baseball. Your argument against Jordan was that he was so much better than everyone, making his player/coach combo less impressive. Six titles in eight years speaks for itself.

More Sports: Should Athletes Take a Stand Versus Donald Trump?


While Brady and Belichick have been amazing, they have been to seven Super Bowls in sixteen years. Winning five of seven is impressive, but there were nine years where they didn’t even get to the final game. Only three seasons in nine did Jordan and Jackson fail to reach the NBA Finals. Brady is not the best player at his position, while Jordan unquestionably was. I find NBA dominance more impressive because there are fewer factors out of your control as the star player, meaning its all on your shoulders. Coaches do just as much and Michael Jordan is greater than Tom Brady. Mic drop.

Photo Credits: The Big Lead and For The Win – USA Today