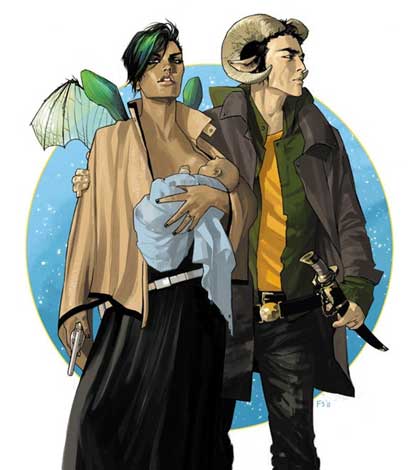 You may not know the name Brian K. Vaughan. But with the possible exception of a season he spent as a staff writer on Lost, he has a body of work in comics (and a few unproduced screenplays) that has made him one of the hottest writers in Hollywood. For years, top directors have circled around trying to adapt his breakthrough graphic novel series Y: The Last Man. His other long-running book for DC, Ex Machina, would make a dynamite television series for any major network. To really see the form stretched, pick up his graphic novel Pride of Baghdad for a side of the Iran conflict you probably never considered.

That’s his previous work, however; it’s what he’s doing now with artist Fiona Staples that will make an excellent holiday gift or just fantastic entertainment value for yourself — SAGA.

Inspired by his childhood influences of Star Wars, Flash Gordon and who knows what other action figures and toys, SAGA doesn’t just span the stars. It jumps from planet to planet and occasionally genre to genre. Vaughan and Staples put almost everything they know into a blender and come out with this.

In the midst of an interplanetary war, two soldiers from opposing sides fall in love and have a child. Though both are basically humanoid, Mom has dragon wings and comes from a technology-based civilization, while Dad has ram’s horns and an affinity for magic. Together they run from the larger conflict, which involves a race of television-headed creatures that may or may not be mechanical.

The definitions don’t matter as much as the wonder that Vaughan injects into every issue. Oh, yes, it’s also got alien bounty hunters, and just when you think you can categorize what’s going on, it veers into a ghost story. In essence, for SAGA, not only is anything possible, it’s all going to happen.

Yet Vaughan also balances it with some serious ideas, exploring themes that are not so fantastical but are sad reflections of our own reality. Like a fairy tale of old, perhaps, he keeps reminding us that life holds plenty of horrors for children. We can hope for a happy ending (and the story is being told by the future grown child of the dragon woman and the ram man), but there has to be much suffering first.

But aside from being a great story, Vaughan and Staples have also made it a great value. Released by Image Comics, the trade collection of the first six issues was released last month at a cheap $9.99 — actually eight dollars less than the original comics cost on the stand. The trade encompasses a solid first book of SAGA, and the creators took a month to catch up and roll right into the next chapter.

It’s not for younger readers, but a mature teen who has outgrown Twilight, or at least needs to read something new, would be a perfect recipient of this book. Don’t let that be damning with faint praise; it’s good for the rest of us, too.