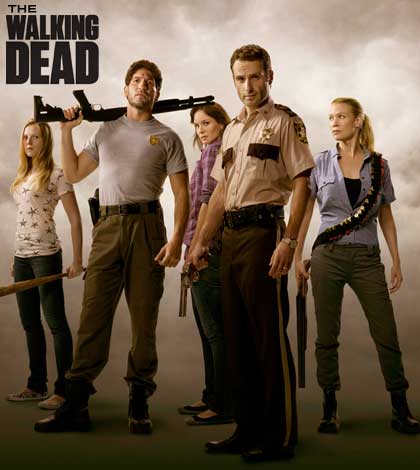 As AMC’s premiere series The Walking Dead (now available on DISH) approaches its midseason finale, both the tension and pacing are running full steam ahead.

Sunday’s episode began with Glenn and Maggie both being tortured for information by Merle. The show has historically excelled at killing off major characters, allowing the viewer to feel that no one is safe. We truly felt one of these two fan-favorites were going to die, but after giving up information about the whereabouts of the prison they were both spared. However, this is deeply out of character for both the Governor and Merle. Both have shown extreme disregard over murder and a certain nonchalance as far as value of human life is concerned.

Meanwhile, Michonne made her way into the prison where she informed Rick and Co. about Woodbury. Rick, Michonne, Daryl, and newest prison recruit Oscar made their way to the village to take their people back. Along the way, they killed a crazy man who had pulled a gun on them. They then used him as a human bait distraction for the walkers because I guess there wasn’t enough time for a proper burial.

The episode ends in suspense with these four perched just outside Woodbury ready to pounce.

What to watch for in next week’s finale:

-Michonne doesn’t know she’s now with Andrea’s people. Rick doesn’t know Andrea is in Woodbury. And Andrea throughout the show has proven, historically, that she doesn’t know much of anything.

-A showdown between Rick and the Governor.

-A showdown between Daryl and his brother Merle.

-A battle of some kind between Michonne and Andrea

-Also some zombies probably moaning and biting and what not.

Episode High: Glenn killing a zombie while handcuffed to a chair by using only his brain and testosterone

Episode Low: Rick and Carl deciding to name the baby Judith, which, as we all know, is a fate so much worse than death

Tune in to AMC December 2 for the finale and then right back here for the review.  It all comes to a head, so to speak, this Sunday.