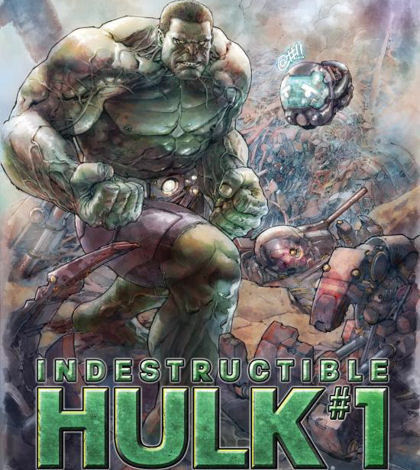 When talking about new comics, a common theme is “how do you get new readers?” That sometimes gets translated as how do we keep comic book stores alive, because just take a look at any Target or Wal-Mart — please, people love superheroes. They’re just not necessarily reading about them. So you get that creepy retake on the Joker, sparked by DC rebooting their entire line. As I’ve mentioned before, Marvel prides itself on not starting over from time to time; instead, they just reposition their characters to a place where they think new readers might feel more comfortable.

Hence the Marvel NOW! initiative, where new first issues of old characters give you, the guy who has, say, watched his Avengers blu-ray at least a dozen times, a chance to start reading about those characters.

So let’s look at the reader-friendly Hulk. Or as his new book calls him, Indestructible Hulk. This is a character bogged down in all kinds of craziness. There are Red Hulks, She-Hulks (one red, one green) and a whole slew of characters created by gamma radiation just like Bruce Banner. But if your Hulk obsession began with Mark Ruffalo’s portrayal, Marvel had to find a way to present that version of the Hulk without violating everything else, or it would be a dreaded reboot.

They started with a strong creative team. Writer Mark Waid has a unique knack for getting to the emotional heart of a character, even when that character is repressed, and finding something new. Reuniting with artist Leinil Yu, with whom Waid collaborated on one of the best Superman mini-series around, “Birthright”, Waid strikes that perfect balance between comics Hulk and Ruffalo Bruce Banner.

First, though, he begins with Maria Hill, agent of SHIELD. From page one, movie fans are in familiar territory as Agent Hill argues with Agent Coulson (yes, Coulson lives!) about security matters while sitting in a diner. (From the movies, you might note that SHIELD agents love talking in diners.)

And then in walks Banner. He’s tired of running. He’s tired of being remembered as the victim of an experiment gone wrong, or worse, as the raging behemoth he can become. Let’s face it: he’s one of the smartest men on Earth. If given the time, a budget, and perhaps protection, he could solve a lot of the world’s problems.

Since this is SHIELD, however, humanitarian aims aren’t quite enough. In exchange, Banner offers them control of the Other Guy. And though Waid soon plunges down the rabbit hole of an enemy you might not be familiar with, it’s the energy and the familiarity that makes this book a great read for new and old readers. Plus Yu — the guy is a phenomenal artist. You can hear the rhythm of Ruffalo in the dialogue, but you can see the repressed emotion on his face.

Not all of the Marvel NOW! books have been as accessible or satisfying. It’s safe to say that Indestructible Hulk, however, accomplishes everything it needs to, and is definitely worth your time.