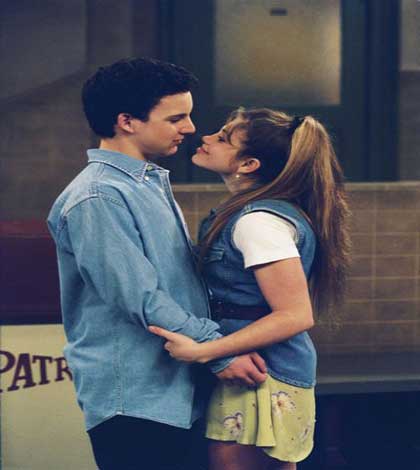 Growing up, my brother and I lived for TGIF on ABC.  An amazing block of television; Thank God It’s Friday every Friday night on ABC!  All those amazing shows, it was like they aired them specifically for us!  Sometimes they did.  One of our favorite shows was Boy Meets World.  Who am I kidding, I still love this show.  Oh Corey Matthews and your best friend Shawn Hunter, how I love you both! You were each so cute in your own unique ways.  Adorably geeky curls of brown hair or the flowing locks of a self proclaimed bad boy.  Oh snap! I’m sure my brother didn’t watch the show because of the cute boys, but he definitely loved Topanga!

Looking back, it’s pretty incredible the show ran for seven years! Most shows are lucky to get a season, but this show thrived in its simplicity.  That was really the best part for me.  You met this boy, Corey, when he was in middle school and saw him grow up and go to college and get married.  You saw him end up with his one true love, just like a real life fairy tale.  Aww.  And yes, I’ll admit it; I watched the show all the way to the end even when it got a little nutty and Corey and Topanga were married while still in college.  That’s just crazy talk!  And can we say syndication?  I still watch the reruns on the Disney Channel even though I’m now definitely too old to watch the Disney Channel.  It’s not my fault! Once they started rerunning the show, I couldn’t not tune in.  I missed Corey.

The other day I received some great Corey Matthews news.  They are planning a follow up series called Girl Meets World!  Oh no, they didn’t!  Corey and Topanga now have a thirteen year old girl and the show is all about her.  OMG!  We are back in middle school again and I couldn’t be happier.  A slight fantasy of mine is actually coming true.  We finally get to see what happens after the show ended! Are Corey and Shawn still best friends?  What happened to his brother Eric? Or Shawn’s brother Jack?  Is Mr. Feeny still around?  Does he still garden next door?  Please tell me they’re bringing back Mr. Feeny!

Even better news; Ben Savage (Corey Matthews) and Danielle Fisher (Topanga Lawrence Matthews) confirmed they are back for the new show. It’s really happening!  Fantasy is reality and a big part of me can’t wait!  While I definitely don’t watch the Disney Channel anymore, except for Boy Meets World reruns, I will for sure be tuning in to see what’s happened to my favorite characters.  Corey and Topanga are back!  Don’t miss it!