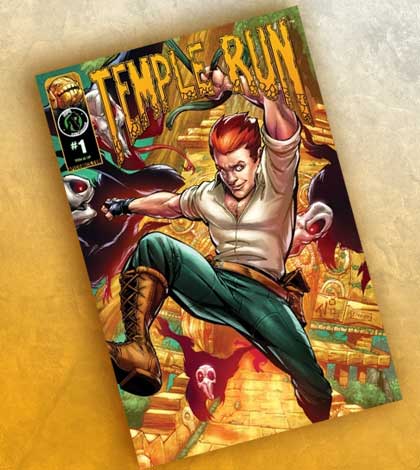 Quick… what do you think the most popular comic book in America is?

Justice League of America sounds pretty good, featuring Superman, Wonder Woman, Batman, Aquaman and the like. At its height last year, it sold about 200,000 copies. Just last month Marvel countered with Uncanny Avengers, which combines Wolverine with Captain America and Thor. (Sure, there are other characters there but to the average 8 year old, hi, Wolverine and Captain American and Thor!) According to their own press, the first issue of that book sold “well north” of 300,000. (Gotta love that vagueness.)

With comics properties being so popular in movies and pajamas, why aren’t they selling at the levels they were 20 years ago, when Marvel’s X-Men #1 sold 1 MILLION copies? Well, kids today have a lot of distractions. Comics are being sold to an increasingly select audience of men, not boys, who didn’t give up their hobby. And didn’t anybody get the message? Print is dead.

Except it’s actually not. And there are “books” that are selling “well north” of 1 million. They’re just not appearing in what people consider traditional venues. For the past few years, a tie-in comic for the popular videogame Gears of War has been selling that much on a regular basis — just apparently through distribution at GameStops and the like, and not The Android’s Dungeon.

If you go by sales of their top title, the most successful comic book company in the United States is one you probably haven’t heard of: Ape Entertainment. Their top title? Pocket God, based on the smartphone app. They sell the book as an app as well — and that’s where most of their sales have been. They’ve hit it out of the park again, selling in the millions with an adaptation of Temple Run.

Neither DC nor Marvel will actually admit what their sales figures are in digital, but an obvious factor is price. If you go to Comixology, which is arguably the best app for reading comics on your personal device or computer, most books are the same price they would be if you walked into a comics shop. Despite no cost of printing or binding, you’d pay $3.99 for that copy of Uncanny Avengers #1 to exist in the cloud and not in your actual hands.

But Ape will sell you Temple Run #1 for $.99. And to the hundreds of thousands of kids that are playing Temple Run the game on their iPods, that’s a pretty good deal. Plus you can download it directly in a variety of languages.

Heck, I couldn’t even tell you what the book is about, except I’m guessing that like the game, it’s a vague riff on Indiana Jones meets the Activision game Pitfall. All I know for sure is that kids are digging it. They’re just not going into a comics shop to do it. They’re going to iTunes, where they can also find Ape’s titles from Dreamworks Pictues, Strawberry Shortcake and Richie Rich.

They’re all out there in cyberspace. And that’s uncanny.