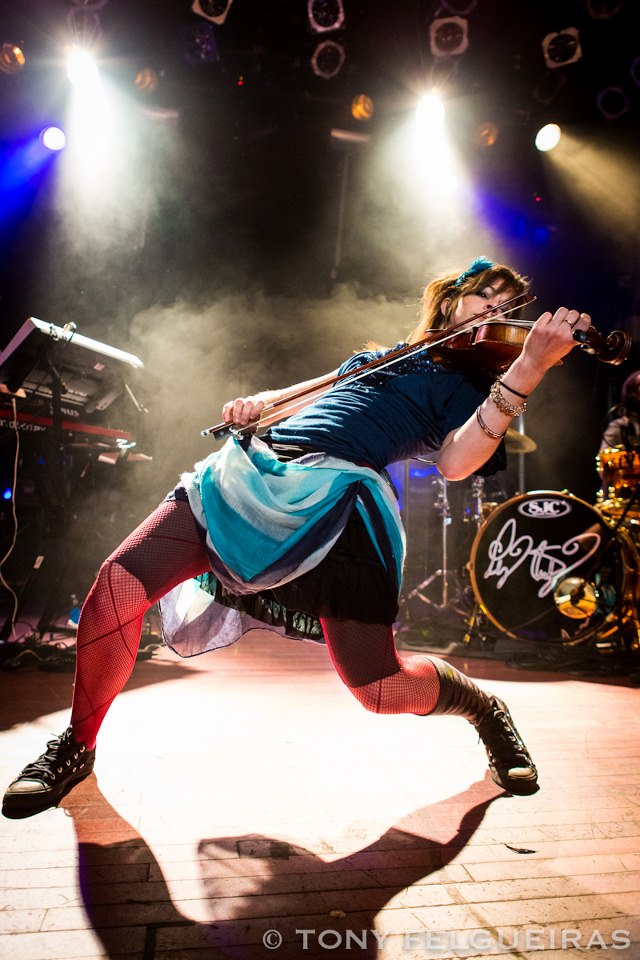 Known for her eclectic style and mad string skills, golden girl Lindsey Stirling shines a light on her career while touring in support of her self-titled debut album, a #1 hit worldwide on the iTunes electronic chart.

Known for her eclectic style and mad string skills, golden girl Lindsey Stirling shines a light on her career while touring in support of her self-titled debut album, a #1 hit worldwide on the iTunes electronic chart.

Roving reporter Sunny Clark caught the talented performer winding up her current tour when lovely Lindsey took time out before sound check at her sold-out Portland, Oregon show to announce 2013 US and European Tours.

In 2010, Stirling was a 23-year old quarter-finalist on America’s Got Talent. Described as a “hip hop violinist,” Stirling’s crowd-pleasing performances were lauded as “electrifying” by the judges, but when the spirited player upped the dance difficulty in her quarter-final performance, judge Piers Morgan decreed, “You’re not untalented, but you’re not good enough to get away with flying through the air and trying to play the violin at the same time.” Sharon Osborne joined in, saying, “You need to be in a group… What you’re doing is not enough to fill a theater in Vegas.” Stirling later wrote in her blog that she, “Was devastated at the results … It was painful, and a bit humiliating; however, I had to relearn where it was that I drew my strength.”

Lindsey Stirling Flies in the Face of Convention

Morgan and Osborne couldn’t have been more wrong. Embracing unique style has paid off for Stirling, who counsels young performers to do likewise. Promoting herself, and propelling her star to fame via youtube, Stirling has critics eating their words. In a 2012 interview, Stirling remarked, “A lot of people have told me along the way that my style and the music I do… is unmarketable. But the only reason I’m successful is because I have stayed true to myself.”