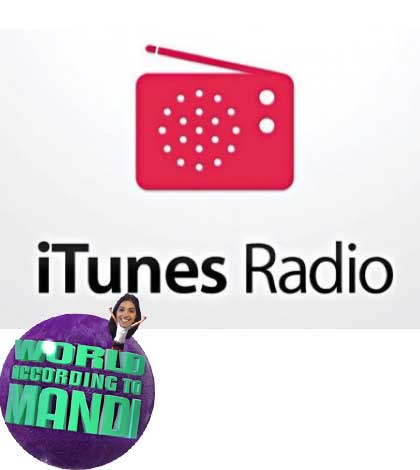 The new iOS operating system came out last week along with some new iPhones.  And packed neatly inside iOS was Itunes Radio, something new to play with! I have the iPhone 5, so I wanted that update. Upon first impression, I’m a fan! It’s like having a new phone, but what to make of iTunes Radio.

iTunes Radio, or iRadio as I’m dubbing it, has a hill to climb in my book. I’m a Pandora girl; I listen to it when I run, when I’m cleaning, when I’m hanging out.  I love how I’ve customized my stations.  I’m not bothered by the ads, normally there are only a few an hour while I run.  I have the Pandora app setup through my Direct TV box too, which is awesome! I can have it streaming through my television! But I love new things and iRadio intrigued me.

Day one of the new iOS and I was ready to give iRadio a try. I was pumped, ready to rock out on one of my morning runs!  I started it right as I was walking out of my apartment, still on wifi, and the first thing that happened when I got outside was the music stopped playing. I was rudely prompted that I was no longer on wifi. Duh! And that continuing to play could add usage charges to my cellular data.  Bigger duh! Did I want to continue?  Well of course, but thank you Apple for looking out for me and not wanting me to go over my usage plan. Grumble grumble, lawyers, grumble. If you know me then you know that the first station I created was Justin Timberlake Radio.  It’s still my favorite Pandora station to run to, so it became my virgin iRadio station. Woo!

The first run was pretty good. But okay people, I’ve now used iRadio a few times with my treasured JT radio station and I’m left undecided.  I’ve been customizing my likes and dislikes on it, but I’m not that crazy about having to “star” a song and then pick whether I want to hear more songs like this or never play this song again.  The thumbs up or down from Pandora wins. This is one step too much for me.  On the plus side, so far iRadio has played a lot of more recent music.  Pandora seems to mix in the old-school pop and hip hop a lot, which is often nice as well.  With iRadio on the JT station I’ve only heard a handful of Justin Timberlake songs, which is pretty weird since Pandora plays a ton of the artist that you choose.  Isn’t that why we picked them? As for ads, I only heard one or two during my hour run with iRadio.  That’s pretty nice! You also have the option to buy the song through iTunes if you choose to like it with the “star” thing.  Nice feature, but I won’t ever use it!

I like this new iRadio, but I don’t see it supplanting Pandora in the end. I’ll use iRadio to run, but it won’t be my primary source of internet radio.  Granted, Apple can improve it, but right now it’s no Pandora. I’ve supported and used Pandora since it was in its infancy. I love the way the app works and I like my stations.  iRadio is fun, but it’s definitely a niche app.  I’m excited to create some more stations, keep exploring iRadio and see how they vary.  Pandora set a high bar and if anyone can one day match its success, I lean to iTunes Radio.