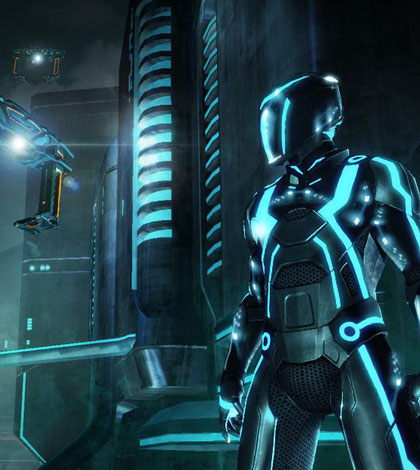 Last week, Disney confirmed that they had hired a new screenwriter, Jesse Wigutow, to pen a draft of TRON 3. Despite the fact that the general public keeps giving only lukewarm financial support to the TRON franchise, it still feels like everybody loves TRON.

30 years ago, Disney released the first film, which was somewhat ahead of its time in its effects but somewhat stilted in its reception. We all played the primitive videogames — I defy you to not get excited about the light cycle race — and even though the movie only did so-so business, it seeped into the culture. Years later, the villainous MCP even appeared as Moses in an episode of South Park.

Fans wanted a sequel, of course. Disney kept dipping toes in officially from time to time, just to see if anyone cared. At Disneyland, the People Mover ride got a brief “World of TRON” make-over before going away entirely. When Disney combined with the makers of Final Fantasy for the Kingdom Hearts videogame, the original TRON himself, Bruce Boxleitner, voiced his well-known character on one of the levels.

Something about TRON just wouldn’t go away, and at Comic-Con Disney snuck a proof of concept video — even involving original star Jeff Bridges — into the tail end of a presentation on, of all things, Race to Witch Mountain. Fans went nuts, but hey, this was the choir getting the preaching. So we got TRON: Legacy in cinemas, we got TRON: Evolution as a PC game, and we got TRON: Uprising on Disney XD, the Disney television channel for tween boys. For fans, it was all fun enough, but none of it set the world on fire. (Uprising, in fact, has been rescheduled from Friday nights at 8 to Sunday nights at midnight — is everybody just DVRing it?)

Yet something about the concept has a hold on Disney. At Epcot Center, Imagineers have revised the Chevrolet-sponsored “Test Track” ride with a heavy TRON influence, though for some reason they will not come out and say, oh, yeah, it’s TRON. For a while last year, California Adventure featured ElecTRONica, a family-friendly rave featuring dancers and acrobats and a whole lot of neon.

But the concept looking cool and actually having meat to it have yet to meet up. Part of it may simply be that the concept really is too big and too deep for what can be communicated in a big studio blockbuster. Two hours may not be enough to explore what it means for cyberspace to actually be populated by cybersouls. (Though Wreck-it Ralph managed it.)  And if there is a civilization in there, why isn’t anybody else noticing it?

Where would TRON 3 go? Legacy did try to acknowledge the past (without acknowledging the sudden change in appearance of all the characters) and move its mythos forward. The plot will likely feature Cillian Murphy as the son of original villain David Warner, as he tries to wrest control of the company his father lost. But will it feature more scenes of a scattered Bridges rambling about “Life, man, changing the game and …oh, wow, man…”?  (And just how can he exist as a physical being in the cyber realm anyway? For that matter, how can Quorra, the “iso” played by Olivia Wilde, exist in a physical form at all?)

That’s the crux of the confusion — this fun popcorn entertainment keeps veering around the big questions of life, the universe and everything and falling short. Some of us might be willing to question the nature of existence at the movies, but not when what we really want to see is a light cycle race, or those fantastic discs. Okay, maybe more of Michael Sheen channeling David Bowie at the cyber-bar, even though it makes no sense that they need to drink!

All I can say with assurance is that my name is MCAW, and I fight for the audience.