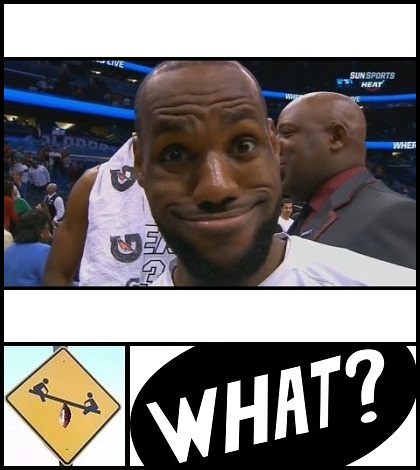 It’s another Summer Sports Quote Game for those missing hoops. It’s an NBA edition of “They said what?” because summer means sports and basketball is always funny. Especially if you’re the famous man who uttered this wacky quote.

After two and a half rounds, Todd is ahead 3 points to Dan’s 2 points.
The first half of round three is HERE. Now for the final quote. “They said what?”

Here’s your quote. Try not to think too hard.

Hint one: This person has continued to entertain us long after his career ended.

Hint two: He played on six different teams in his illustrious career.

Since you needled me by saying “try not to think too hard,” I’ve been pouring over this for hours, wracking my brain.

I immediately thought of an NBA player as the answer, which speaks to clue number one. NBA players often have the bigger personalities both on the court and after their playing careers are over. Hint two narrows down the choices but doesn’t point me to or away from basketball. Hint three is very sneakily tricky though. “Best known by his nickname” implies it is used in place of his given name. I hope this was the proper implication.

My final answer is Shaq, AKA Shaquille O’Neal.

He certainly fits two of the three clues, although I can only come up with five NBA franchises he played for: Orlando, Los Angeles, Miami, Cleveland and Boston. Hopefully there’s one more I’m forgetting!

You little sneak. Shaq is correct, and it seems not matter how obscure I try to make my hints, they are still just good enough for you to get it right.

The team you missed was the Phoenix Suns. Shaq played their before heading to Cleveland.

I can’t believe you swept the round.