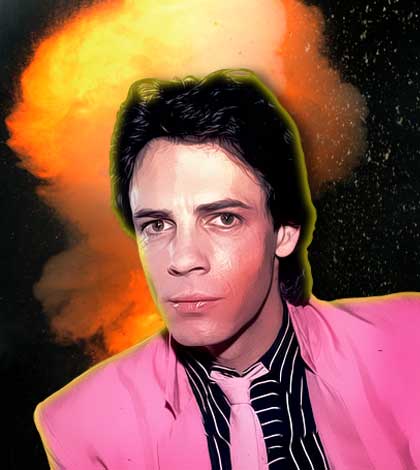 Songs for the End of the World

Before we get started it is important to mention; this is not your typical hard rock story about a starving musician turned actor, or actor/musician turned Soap Opera star, turned movie star, turned Grammy Award winner, turned one-hit wonder, turned TV b-actor horror-show, and then turned Talk-Show head-case!

His name is Rick Springfield and this tale starts way back in the late 1960’s (yes, you heard right, 1960’s) and as little Richard grew from a troubled teen, to minor rock star in his homeland of Australia, then even bigger star here in America, he was soon chewed up and spit out and left for dead.

To make ends meet, after the rock and roll dream bit the dust, Rick turned to acting (to pay the bills). Still writing and recording his music, Rick finally hit it big with… (you guessed it) “Jesse’s Girl”. This is where the story ends. Well, not really, Rick Springfield won a Grammy, continued to write, record, tour and make millions! But sadly, this all happened ‘OUT’ of the spotlight and to only a handful (OK Millions) of loyal fans across the globe. Not that there’s anything wrong with that!

Rick Springfield has just released a new collection of songs. The new CD, Songs for the End of the World, is Rick’s sixth CD in the 2000’s! I bet you couldn’t even ‘imagine’ that would be the case huh!?! But it’s true! And like the previous five, this one shows Rick standing tall and rockin’ harder than he ever has (believe it or not, this guy just turned 63!) Seriously, I know! I saw Rick last year and he expended more energy on stage in one night then I have my whole career! ‘I’ was exhausted after the show! His voice was in great shape, as was his body, and his band was as tight as ever.

Songs for the End of the World

This CD doesn’t really contain any songs that are as dark as the album title would suggest (at least not as dark as a song titled “My Depression” from his 2004 release (SDAA). In fact, even though the instrumentation is raw and tough (as always), and the song titles are somewhat gloomy, the songs themselves are quite positive! You can almost hear Rick kind of fighting back a smile during some pretty self-deprecating lyrics.

So, the point of all this drivel you ask? Rick Springfield is a Hall of Fame rocker that has been overlooked by the rock establishment and critics for years. He continues to push himself, and his music way past what ‘he’ even thought was possible. Go get the record already, do the guy a solid! You won’t be sorry.