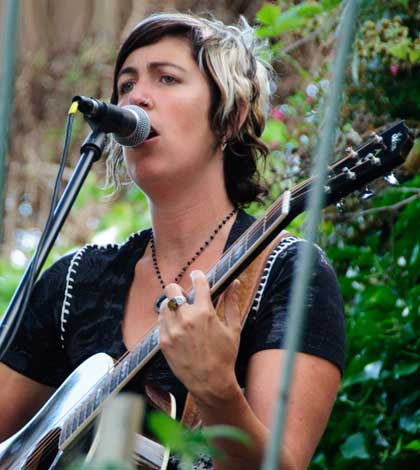 Camille Bloom thrives in the artist’s life, touring Europe each Spring, and the States annually.

While touring for the powerhouse album, Never Out of Time, Camille Bloom has been profiled by Advocate Magazine and become this month’s subject of a Music Connection live show review. Bloom readily shares the love, saying, “I have a wonderful publicist, Wendy Brynford-Jones… she’s amazing!”

It’s not just her publicist who’s singing Bloom’s praises though; while at the Iowa Womens Music Festival, KFMG DJ and general manager, Ron Sorenson, rightly announced that “Her music is for thinking people.” Bloom appreciates the nod, saying, “I’ve worked really hard to create that connection. And I fall in love with my audience through the connection at each concert.”

Bloom blossoms each spring during her European tour, where the acoustically brilliant singer-songwriter seduces foreign audiences and admiring crowds in the Netherlands and United Kingdom, Belgium, Germany, Ireland, Denmark, and Iceland.

Thriving in the artist’s life, touring Europe and the States annually, Bloom remarked on her life’s inspiration, “Everything I do is music. In summer, I direct a non-profit rock camp.”

Get to know Camille Bloom from this intimate video for Habit. Read Sunny Clark’s full interview with the Seattle-based chanteuse on Oregon Music News.