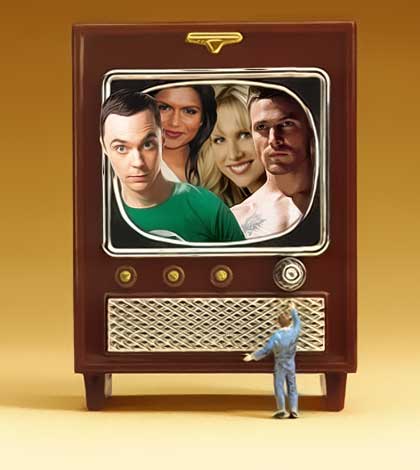 Anyone else notice a theme happening with the leads on our favorite TV shows lately? As recently as five years ago, shows like Gossip Girl were taking over the small screen. With its hauntingly beautiful cast, including Blake Lively as Serena (every guy wants to *date* her and every girl envies her luscious locks) and Chace Crawford as Nate (those eyes!), audiences everywhere were taken to a new, far-off land. A land of infinite wealth, beauty and opportunity. A land where backstabbing your best friend is a regular occurrence and sleeping with your enemy seems like a brilliant idea. But, let us not forget, Gossip Girl was created in 2007… my how things have changed.

Think of the new shows we’ve been watching (and loving) this Fall. Nearly every new show has at least one perfectly imperfect lead (not character-y best friend…LEAD.) Obviously, the easiest target is The Mindy Project’s Mindy Kaling. This brilliant woman has made a name for herself by creating flawed, even awkward, characters; something that, 5 years ago, wasn’t happening in the industry. OK fine, wasn’t happening with the exceptional exception of The Big Bang Theory, which is where I believe the trend got its start. Quirky, oddball type characters (we love you, Sheldon!) were all of a sudden filling our living rooms with laughter. We no longer felt as if we, as normal people, were on one side of the screen staring at the beautiful people who were living the dream. Obviously, a tremendous amount of emotional eating happens when us average folk watch the glamorous break every rule of compassion and still come out on top. This, my friends, is why obesity has raised so much over the past few years…you can blame Blake Lively’s hair.

The good news is this: great shows (shows that few were expecting to be this clever) are emerging with refreshingly normal lead characters. FOX’s Mindy is simply one example, though, if you’ve been watching the show, you will agree with me saying: “kudos, FOX!” Mindy is campy, silly, and absolutely relatable…that is, if you’re a real person and not a super model. http://www.fox.com/the-mindy-project/

FOX hit another nail right on the head with Ben and Kate. If you’ve been avoiding the show due to its family friendly vibe: don’t. Though Lucy Punch (a hysterical BJ) is clearly the breakout star of the show, leads like Nat Faxon (an out-there Ben) once again prove that average Jo’s are coming to take over primetime. http://www.fox.com/ben-and-kate/

Even the new “sexy” has been altered. Both Beauty and the Beast’s Beast (Jay Ryan) and Arrow’s Arrow (Stephen Amell) are writhing with imperfections. Obviously, these guys aren’t tough to look at, yet both characters are quite literally scarred. When all is said and done, these flaws allow us normal people to rally behind these characters in a much more real way.  We are hoping that these damaged and imperfect characters can triumph over evil, find love, and lead a happy and successful life. Because, if they can, we can…right?