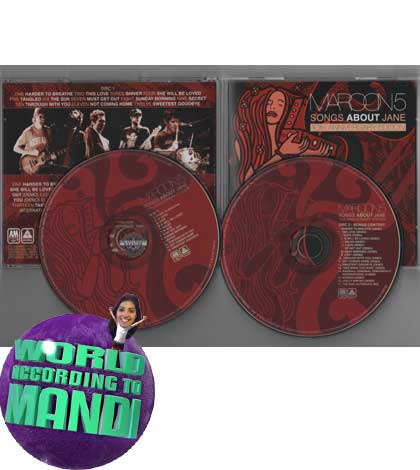 Back in 2002 there was this awesome band that put out an amazing album called Songs about Jane.  The band, Maroon 5, took a while to build up steam and eventually blew up, riding that album and touring with it for years. And rightfully so because it was awesome! The first song they released was Harder to Breathe. Oh man, I loved that song! Yes the band is still together, but what really happened to Maroon 5?

In all honesty Songs about Jane is one of my all time favorite albums. I listened to it nonstop for like two years! My man and I loved all of it, even the B side, and the pop rockfish feel still resonates today. There wasn’t a song on there I didn’t like, dance to and blast in my car. I couldn’t get enough of ‘This Love,’ ‘Sunday Morning,’ ‘The Sweetest Goodbye’… if I keep going I’ll just name them all.  I was psyched for another album from them! I anticipated it, I dreamed about it and I hyped that album in my mind. Uh oh.

In 2007 that new album arrived.  Oh snap! It was called It Won’t Be Soon Before Long.  I jumped in head first and listened to the first song ‘Makes Me Wonder;’ it was just okay.  I plowed through the rest of the tracks and found them catchy, with a kind of pop electronic feel, but nothing on the album grabbed me like Songs about Jane.  I wanted so bad to like it, but nothing made my heart flutter.  I continued to listen to the album, hoping it would grow on me, and the singles were played all over the radio. But I don’t get it! What happened to the magic of that first album?  This music was no longer Maroon 5, it was just Adam Levine. Snooze. Now don’t get me wrong, he’s way talented and attractive and the songs are all catchy, but that’s it. Not good enough. Great music needs a heart and Maroon 5 lost theirs.

Years later I still can’t believe it. Maroon 5 is one of the greatest enigmas of my life people! When they broke in on the music scene they were wonderful. Their album grabbed me and took hold of my soul. But that’s all gone now and I can’t fathom what happened.  They still make music and have put out three other albums that all paled in comparison to their first.  I wish this was a unique case, but in reality we’ve seen it a million times. How did it happen to them? I really didn’t think it would.  Maybe I was naïve to believe Maroon 5 could put out a second great album with another and another.  No maybes about it! There is nothing fresh about their music today.  The band rides the success of Adam Levine, of The Voice fame, and I’ll be honest people. I don’t like it! I don’t.

Maroon 5 will forever be one of those bands that I wished did not sell out. Yep, I said it! They totally sold out. The money crushed their art. Damn! For me, nothing beats that first album from 2002.  It was like they were my friends and they did something amazing, but ever since they’ve just been screwing with me. I still expect greatness when I hear they have new music coming out.  A girl can dream!

In the end, I’ll take any song off of Songs about Jane over those cookie cutter songs they play on the radio today.  Go away ‘Moves like Jagger’ and ‘Stereo Hearts.’ You have no heart; it disappeared, vanished and in its place is left a shell of what you could have been.  Maroon 5, I mourn for thee. RIP to my excitement for a new album, for any trace of what you were and what you could have been.  I can’t change the choices you’ve made, but I don’t have to like them either.  My saving grace, one day soon a new band will come along and inspire me like you once did. Sorry Maroon 5! I’ll let go of you and fall in love with someone new, learning all over what great music is.