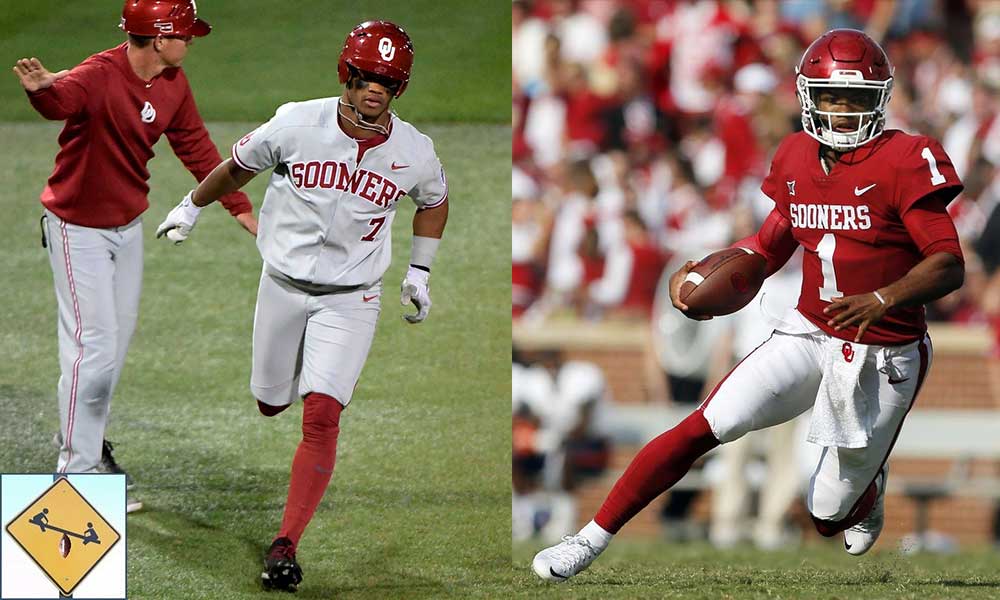 Dual sport athletes are rare, but Kyler Murray is an even bigger exception for the modern-day. Should he pick baseball or football? Money is on the table.

This past week, the MLB amateur player draft made news for the first time in a while. Normally, this draft is reserved for those in the nerdiest of fantasy baseball dynasty leagues. This year, there were two vastly different stories that actually caught the eye of the casual public.

The first story was about the chances of a convicted child molester being drafted. He was not. The second story was far more fun. It was about Kyler Murray, a dual-sport athlete for the 21st century.

Murray was selected ninth overall in the first round of the draft by the Oakland Athletics. The interesting thing about Murray is he is also attending the University of Oklahoma and is slated to be the football team’s starting quarterback this fall.

MORE BUZZCHOMP: Westworld Blows Up Bernard’s World and Ours

Murray is in a somewhat unique spot. He is a college transfer. If he was entering college for the first time, he would have to choose between attending school for three years or going straight to pro ball to play in the minor league system of the Athletics. As it stands, Kyler Murray is able to attend school for one more season and then move onto pro baseball.

Of course, he needed some sort of permission or allowance from Oakland to let him play a dangerous sport such as football, while still cashing in on a baseball contract fit for a top-10 pick. That appears to be exactly what happened. Oakland agreed that he could play on the gridiron in 2018 and still receive that peachy $4+ million signing bonus.

This could have transpired much differently, which piqued my interest. What if Oakland said he had to choose? What if he hadn’t been selected so high, since many projections thought he was a late first-round draft pick, not a top-10 player?

Since the real Murray already seems to have settled on a perfect balance, let us debate the hypothetical Murray.

What if the A’s took Murray ninth overall, offered him $4.7 million and said he could become a professional baseball player but could not step foot on the football field for Oklahoma? Football is a dangerous game. It would make sense for Oakland not to want him to risk injury. It could also make sense for him to prefer the glitz and glamour of division one football and a potential NFL future to that of long bus trips in minor league baseball.

Monetarily, baseball is obviously the way to go. But that is only from a contractual perspective. Baseball players have almost zero endorsement power in the country today. Murray may not project as an NFL quarterback, but NFL skill players are on a marketing and popularity level above even the premiere baseball players.

It would depend on the player’s preference obviously, but I think I would choose football. If immediate money wasn’t a necessity, it seems like the more fun route to traverse. Starting quarterback following in the footsteps of a Heisman winner is pretty glamorous. Then he enters the cycle of the NFL Draft. Is that any bigger of a crapshoot than making it to the big leagues out of minor league ball?

I suppose the fact that he was chosen ninth overall would indicate a better-than-average chance of advancing through the levels of MLB. But what if he was chosen 29th instead of ninth? The bonus money would be much lower; the support of his new franchise would probably be less too. It’s a quandary indeed, one that the real-life Murray fortunately doesn’t have to deal with.

This is an awesome story and a tremendous hypothetical. One other factor that is rather subtle must play a major role in this debate. Kyler Murray is an extraordinary exception as a dual sport athlete. Football players do get drafted by Major League Baseball with some frequency, but rarely in the top ten of the MLB draft. Dual sport athletes are rare themselves, but a player who is actually great at both sports is even more unique. These players have in the past chosen to play multiple sports, a la Deion Sanders and Bo Jackson. Eventually they must focus on one sport, unless you’re Jackson who stands above everyone.

Murray is an exception within a unique circle of dual sport athletes. This is why Oakland made an exception for him. They must LOVE him as a player. He was just a top ten pick and they are willing to wait a year before getting him into their system. They are also guaranteeing his signing bonus. The odds are very high that he plays in the majors within one to three seasons, after playing quarterback that is. Murray gets to choose both. If I were Kyler Murray, I would ultimately pick baseball, which it seems he has done himself.

Picking baseball nets Murray nearly five million dollars immediately. He can do with that as he chooses. Baseball careers are much longer and the longterm health problems from being a professional baseball player are nearly nonexistent when compared to NFL players. You also get to play your sport during the spring and summer, rather than during all of the major holidays. He can spend that time with his family. I’d also argue that because he is a dual sport athlete, Murray will get marketing opportunities. They will likely hinge on how his season at Oklahoma goes.

Imagine the possibilities if the already exceptional Murray has a season for the ages as Oklahoma’s starting quarterback. He has some minor notoriety right now, but leading the Sooners to the College Football Playoffs will elevate his stature immensely. Murray has a chance to win the Heisman Trophy and go undefeated and win a National Championship. These are all tall orders, but he is in position by being at Oklahoma. Coming close to achieving any one of these accomplishments will net Murray the marketing opportunities and national attention usually missing from early MLB careers. Such success in college football would likely get him into the NFL Draft conversation as well. Considering he’s already committed to the Oakland Athletics, this story will only get more interesting and has just begun.