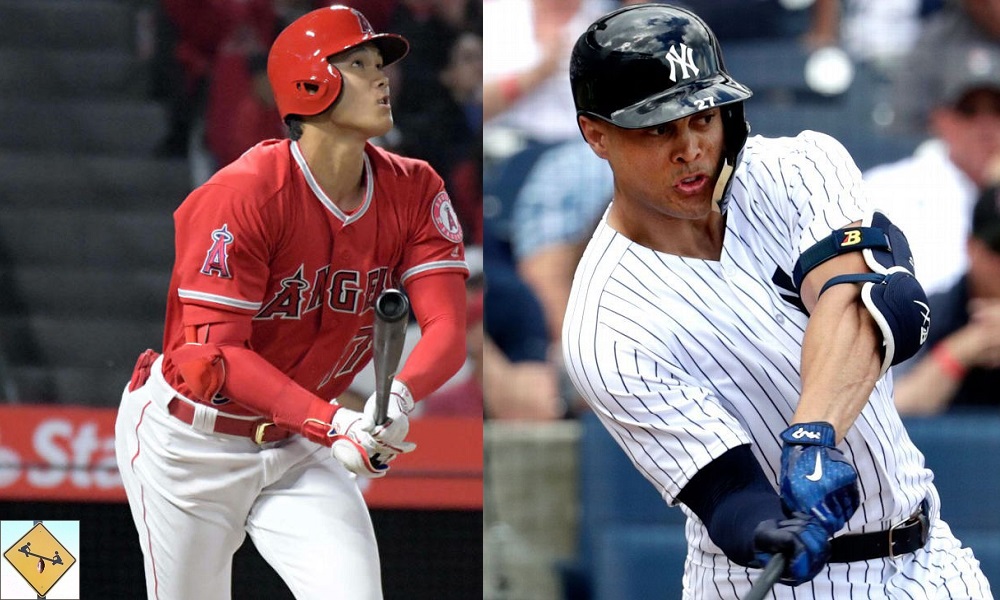 Two incredible stories have enveloped Major League Baseball thus far. Shohei Ohtani and Giancarlo Stanton are dominating headlines. Do you love it or hate it? We’ll go one at a time.

The two biggest stories of the MLB offseason/preseason were Shohei Ohtani and Giancarlo Stanton. One was a generational newcomer to the majors. The other was an MVP on the trade block. Neither circumstance was very common, thus both warranted constant monitoring. Through the first week-plus of the regular season, one has excelled and looked like an MVP candidate. The other is Stanton.

It is too early to care about specific numbers, but boy has Ohtani been special. At the plate, he already looks like the Los Angeles Angels’ second-best hitter. He mashes deep shots against all-comers, including going opposite field against Cy Young winner Corey Kluber. I wish the Angels let him hit on the days he started on the mound, but they fear being stuck with two or more at-bats from subsequent pitchers after Ohtani exits the game. As it stands, he is a fearsome DH two times a week. And then he pitches once a week and throws six perfect innings in his second career start. Bad pitchers have thrown no-hitters before. It is the fluke of the nature of the sport. But Ohtani flirting with a perfect game and no-hitter isn’t fluky. He is missing bats like the seasoned baseball pro he is.

I am happy for the sport that he is good, but I am also genuinely happy for the man. He struggled through spring training, which is something I pay zero attention to with 99 percent of players. But with him, I had an eye on how he was doing, and he was doing horribly. It turns out, just because he’s so young and so new to American baseball doesn’t mean he’s unfamiliar with the idea of training. He used the spring just like a seasoned vet should: to work back into game shape without worrying about working counts and at-bats how one would in real games. He used it to simply get his arm ready. Ohtani is bound to encounter trouble, but he already belongs in this league. It’s downright fun.

As for the actual former MVP, Stanton is fumbling at the plate like some expected Ohtani to. Through 10 games, Stanton has 20 strikeouts and 13 combined hits and walks. He has two separate five-strikeout games in 10 games played which, as you would expect, has never happened before. I’m not actually worried about him moving forward, since he hasn’t actually been that bad if you treat a strikeout as just another out made. But as much as Ohtani has been fun, this Stanton start has been…interesting. If he wasn’t a reigning MVP, it would mean less, but he is. Had he not been traded to the former and future Evil Empire, it would mean less, but he was. If this lineup wasn’t (and isn’t) expected to break the all-time home run record, it would mean less, but it is. If this had happened in July, it would be worth an eyebrow raise and nothing more. Since it’s April, it makes larger headlines.

Yankees fans have been booing Stanton during home games, which also doesn’t mean much of anything unless he takes it personally. And if that final nugget is true, then maybe the strikeouts and the struggles do, in fact, mean something because he is a reigning MVP who was traded to the New York Yankees and is in the meat of a lineup expected to be the biggest basher in the history of the sport. This sluggish April only matters if it matters to Stanton. Otherwise, it’s statistical noise, albeit…interesting noise.

I would not call the Stanton story interesting, but we agree its statistical noise. He will be fine and end this season with great numbers, even if they are not ultimately on an MVP level. But I hate this story! I hate it nearly as much as I love the Shohei Ohtani story. If ever there was a Love/Hate feud in baseball between two things, this is it for me right now. Screw rivalries, because the media has created one in the headlines.

Ohtani is the best kind of story. Watching him succeed, for my hometown Angels no less, is the ultimate happy ending to the beginning of his MLB career. No matter how great or average he is this season, no one will forget how unbelievable the first few weeks of his young career were. Having him on my fantasy baseball roster in the batting category makes this extra sweet. The fact that he is two players in our league makes this weird and fun. Everything about Shohei Ohtani is exciting!

Stanton is truly a non-story for a team that always makes headlines. The Yankees bullpen issues are more interesting and concerning as a fan of the team, yet few baseball fans outside of New York care. They are more concerned with their own club’s struggles, unless we are talking about the league MVP who started an exodus from Miami and joined the team everyone else loves to hate. His struggles likely make other people happy.

April baseball generally tells lies and is deceiving at best. If Stanton is bothered by his performance or people’s reaction to it, then he is not the pro we all thought. He is going to suffer as a Yankee. But that too is far-fetched. New York fans love to boo and flip the bird. They also love to cheer and hoist players up as kings. Aaron Judge has his own fan section in the bleachers, despite having similar struggles late last year. As long as Stanton forgives himself, if he cares at all, then Yankees fans will be there with open arms when his extended spring training concludes and the hits start pouring in.

You mention how Shohei Ohtani is two fantasy baseball players in our league. Prior to the season starting, no fantasy companies knew the best way to treat him. With just a week-plus in the books, I already feel like the two-player split was the wrong choice. It saps a lot of the enjoyment out of owning him on your fantasy team I have to imagine. (I personally wasn’t fortunate enough to acquire either half of Shohei.) The plus side coming into the year about the two-player split was the ability to drop the batter version of him if it struggled, or vice versa, without sacrificing the Ohtani that was excelling. The only other bonus was from the fantasy site’s perspective. I have to imagine it was immensely easier to program Ohtani into the system this way.

But after such a short time, that is already the wrong choice. The other option – which labels Ohtani as a multi-position player with DH and SP eligibility – is everything that is fun about him. We figured this was the best option heading into the year, and the first week and a half has confirmed that…unless you play in a weekly league!


What would you do in this scenario where you must designate Shohei Ohtani at a position for the entire week? Would you choose the one start on the mound or 2-3 starts at the plate? Neither is ideal. In fact, in weekly fantasy leagues with dual-eligible Ohtani, he is probably a league-average player! He never accumulates a two-start week, a must for that format. And he will never bat everyday or even close to it. Can you imagine a weirder scenario? This guy, who is taking over the league and our hearts and is arguably the most valuable fantasy asset in the sport in certain settings, is barely worth rostering in that one format. It is bizarre indeed.