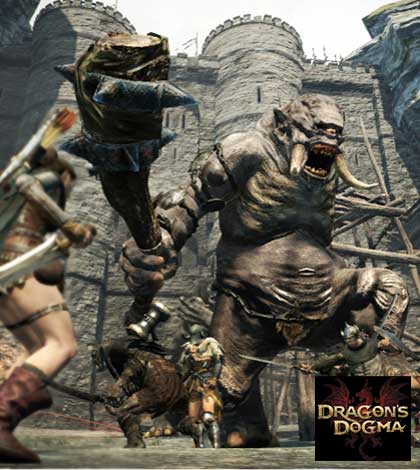 Dragon’s Dogma – Where to begin? From the start of the game, well at the beginning cutscene for me, I had to put the controller down and go outside of my room for something, so I put it on pause and it skipped it, so when I came back and unpaused it, it started me off in some pre-made party fighting a Chimera, I myself had no idea what was going on. After you kill it, it kicks off to the real story, you create your Character and starts you off with a cutscene, then you fight…well, a big ass Dragon, and it kills you, you can’t win. Another cutscene plays, you’re on the beach, dying and bloody, the dragon digs his talon in your chest and steals your heart and, somehow, you’re still alive, because of this, you are now ‘The Arisen’. Basically this game in my opinion, is a mixture of Monster Hunter meets Dragon’s Age, it doesn’t have the amount of difficulty that Monster Hunter has, but it’s still pretty damn hard.

I didn’t get that far in the game, I got to Gran Soren and did the quest to liberate the Castle from the goblins. I really liked the game but just haven’t had the time to play it more. Throughout the game you just do quests, and from what I’ve seen, the quests objectives, are far, far away. It takes a lot of traveling to get to the quest objectives, and along the way, you may encounter some big enemies, Chimeras, Giant Cyclops’, Giant Armored Cyclops’, Regular Cyclops (that enrage when low on HP and go crazy if you have a female in your party, they may not be giant, but they’re fast and still hurt) and even a Dragon (if you come across one, DON’T fight, just RUN…I learned from experience).