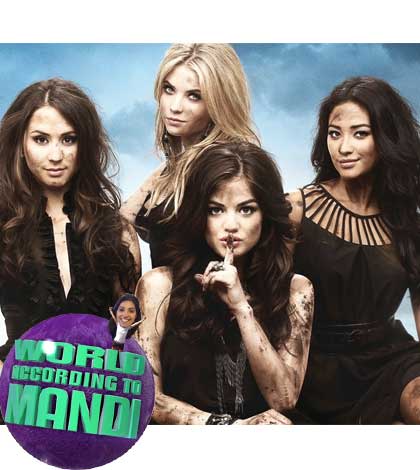 It’s Fangirl Friday Pretty Little Liars edition! The most recent episode ‘I’m A Good Girl’ sure you are.

Oh damn kids! Next episode is the big A reveal! My mind is racing with options of who A can be. Is it Andrew? Aria’s new CREEPY boyfriend. Is it Ezra? I still don’t believe his book excuse. Is it Mona? I don’t believe she is dead either. Is it one of the PLL’s? I would be PISSED if Aria, Spencer, Hanna, or Emily were A. That would just be messed up kids. OR is it going to be someone that we’ve NEVER met before? That could be an easy way for the show to continue on with some mystery.

This most recent episode gave us NO clue as to who A is except the whole Andrew mentioning that he was an eagle scout. Hello! He could have totally tied up Mike. BUT wouldn’t that be a little obvious?

I’m nervous for our PLL’s! They got arrested at the end of the episode and it looks like they’re going to be tortured by A prior to the big reveal! I can’t wait!

Photo credit to http://3-ps.googleusercontent.com/ & http://www.ew.com/
Happy Fangirl Friday and Pretty Little Liars who is A? Are we going to be shocked on tuesday?