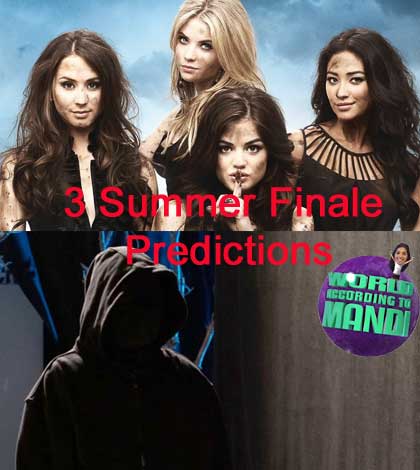 We’ve been promised a Charles face reveal, but what else will we learn from the Summer Finale? I’m predicting a death, one of the liars being betrayed by their lover, and the return and disappearance of Mona. That’s right! It’s time for answers, but it wouldn’t be Pretty Little Liars without some curve balls thrown in.

It’s time to say goodbye to Mr. DiLaurentis, because we think Charles is going to kill him. Mr. DiLaurentis really killed his wife, not Charles, so its time for revenge. HOT DAMN! Check out our video blog to see our other two predictions kids.

Can’t wait for the Summer Finale in less than a week!

Next Post: Pretty Little Liars – Who got FrAmed and Red CoAt!