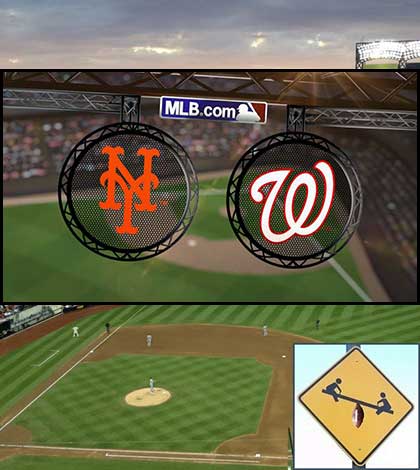 The National League is closer than ever and the New York Mets now lead the Washington Nationals in the NL East. Can the Mets actually win their division and return to the MLB post season? I smell a sports debate.

We debated on Monday about the AL East, but we need to let some time pass before really knowing how much the Yankees will regret not making a splash at the trade deadline. They still have the opportunity of taking on money and trading for a player who passes through waivers before September 1st. Elsewhere, it appears as though some teams are separating themselves from the pack, while other division races tighten up. The most intriguing plot line remaining is also out East, in the National League.

Can the New York Mets actually win the NL East?

Prior to the year, the Washington Nationals were supposed to be a juggernaut and cruise to 100 victories. The only question was whether or not they would encounter any troubles on their way to the NL pennant. Instead, Washington has been unable to run away from the Mets all season, and is actually in second place in the division as of August 6th.

ALSO ON BUZZCHOMP: Can the Blue Jays catch the Yankees?

New York has big trouble scoring runs and is a terrible road team. However, the team’s rotation is filled to the brim with talent. The Mets have allowed the third-fewest runs in all of baseball, despite a pedestrian run differential. The NL is real tough this year, so if the Mets don’t hang on for the division title, they could easily miss the playoffs entirely. The same goes for the Nationals. You know me, I always resort to larger samples and proven results before hopping on a bandwagon. I have to assume the Nats will come back to win this thing, especially since they got some important hitters back off the DL recently.

The Mets sort of did the opposite of the Yankees. Rather than holding firm with how much they were overachieving this year and riding it out, they instead made a move to improve their weakest point. The Mets are far from going all-in on winning this year, because they hung onto all of their big pitching arms, but the point was made that the NL East is not being handed over to the favorite.

NL East is a battle

It’s certainly a great year to be a baseball fan in New York, and I’m firmly planting myself on the New York Mets’ bandwagon. I predicted before the start of the 2014 season that New York would turn things around and make the playoffs. Unfortunately that never materialized last year. But this season the Mets have all the mojo, and the right pieces in place to actually make that once crazy prediction a new reality.

Can the Mets actually make the MLB postseason? The answer is a definitive yes. Being two games up on Washington (as of yesterday afternoon) puts New York 1.5 games out of a wildcard spot, if necessary. It has to be the NL East or bust, because the Pirates, Giants, and Cubs are playing too good of baseball. Just like in the AL, the National League is coming down to the wire and may result in a play-in game for the final wildcard spot.

NL East or bust means the Mets must capitalize on their remaining games against the Nationals and their other more ordinary division opponents. They ride a six game win streak into Friday, which includes a three game sweep of Washington. The two teams play one another six more times, including the final three of the season. But more importantly for the Mets, they have a whopping 23 of their remaining 54 games against other NL East opponents. All three teams are more than ten games under .500 as we speak.

Add in seven games against Colorado, three versus the Red Sox, and four against the Reds (all teams ten games or more under .500) and that’s 37 of 54 games against not just losing teams, but teams that down right stink. New York’s incredible pitching staff can easily handle those teams. The National’s remaining schedule, by comparison, is more difficult. They will get to feast on the NL East quite a bit, but must also take on several other teams heading straight for the post season.

The Mets get it done in 2015 and win the NL East, but it’s not all roses for New York. Feasting on the scraps of bad baseball teams to win your division is no recipe for playoff success. Great pitching is, but at some point the Mets’ hitters must come to life. The team is last in the National League in runs, last in batting average, and near the very bottom in both RBIs and on base percentage. Pitching may be enough to take down weak opponents, but the Mets might also want to scour the waiver wire for yet another bat to give their lineup some late season pop.