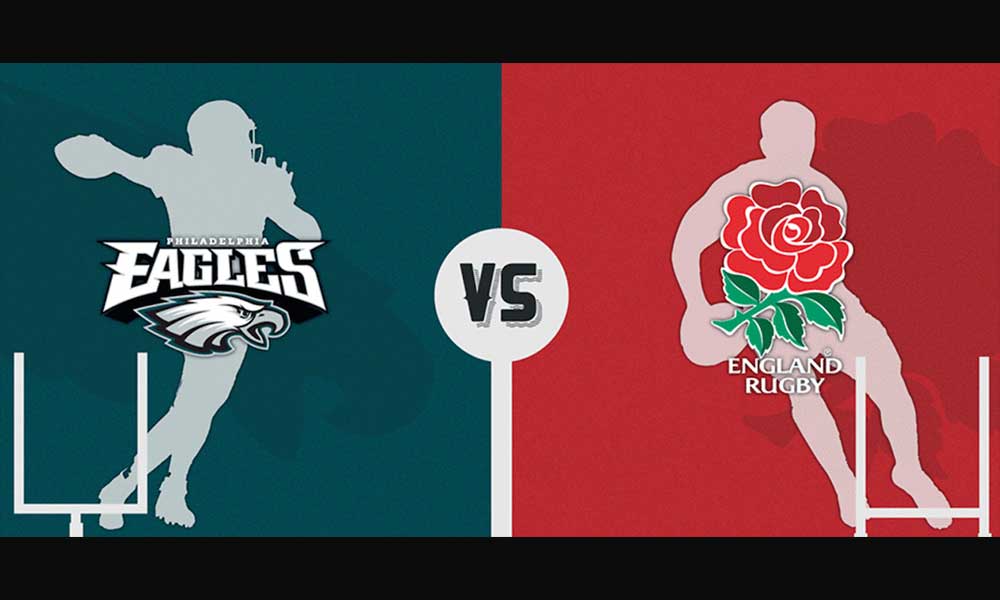 Determining the best team is hard enough, but what if we crossed sports? Who would win if the Philadelphia Eagles played against England rugby, known as the Three Lions?

It’s a loaded question that’s guaranteed to get a heated debate going between sports fans, is American Football better than Rugby Union? We’re proud to call football the USA’s favorite contact sport, however the Brits swear by Rugby Union, and while there are a lot of differences, there are also a few similarities.

Comparing the top two teams from each country, the NFL’s Philadelphia Eagles and England’s national rugby team, affectionately known as the Three Lions, we get some pretty fun statistics.

MORE BUZZCHOMP: Is this the best NCAA Tournament ever?

Both teams have won their sport’s top prize once. The Philadelphia Eagles put on an incredible performance at the last Super Bowl, defeating the New England Patriots, while back in 2003 England won the Rugby World Cup. However, they’ve also won the annual ‘Six Nations’ trophy a whopping 28 times. The site SBO.net has gathered data on each team to help you decide who comes out on top, including everything from player statistics, team performance, stadium capacity and other fun facts.

Some of the similarities include the average age of each team’s players, with the Eagles being 25 and England’s 26. The average player height of both teams measures in at 6’2”, while their tallest players, being the Eagle’s Will Beatty and England’s Courtney Lawes, are both a gigantic 6’6”. Very similar thus far.

The Philadelphia Eagles are the heavier team of the two, weighing in at a brawny 240 lbs on average, compared to the Three Lions’ average of 227 lbs. Brandon Brooks is Philadelphia’s heaviest, sitting at 332 lbs, which is almost double that of their lightest player Jake Elliot at 170 lbs. The total weight range of the England rugby team is quite tight at just 90 lbs.

If you were going to weigh each team by their mascot, it would take 1,358 Bald Eagles to even the scales on the Philadelphia Eagles, and 3,885 red roses to measure up to the weight of the English team. That’s a lot of flowers and birds.

Philadelphia has seen way more individual performances shine through than that of the England rugby team, however the Brits have had a more impressive win record. David Akers had an incredible point score of 1,323 across his 11-year career, while England’s star player Jonny Wilkinson scored a total or 1,179 points during his time wearing the red rose.

Who would actually win between the Philadelphia Eagles and the Three Lions? We’ll leave the difficult decision of deciding who is the best up to you. Have a look through the figures and brush up on your NFL and rugby fun facts. Then be ready to break them out on the next game day.