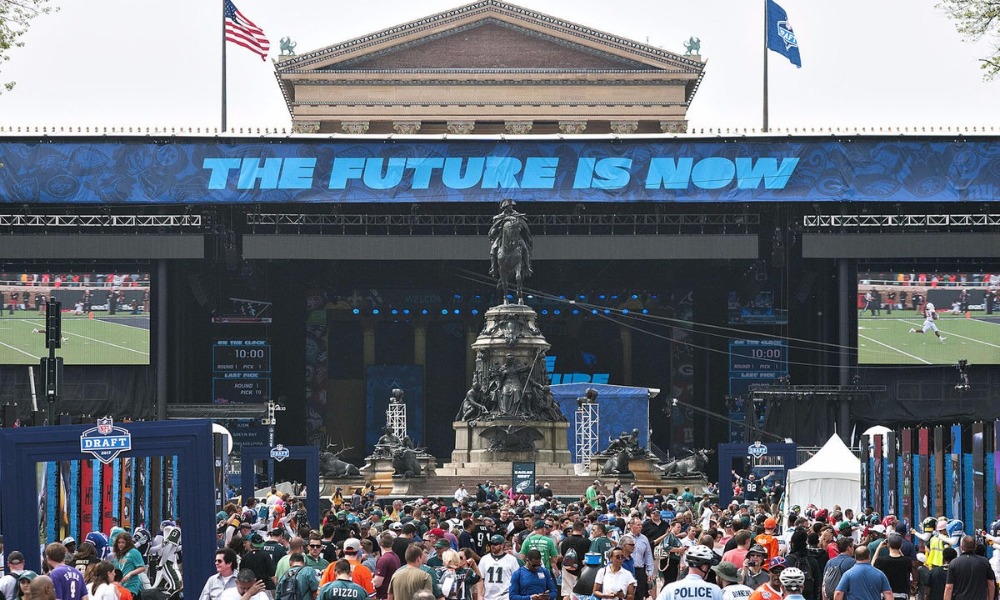 The NFL Draft this year was hosted by the city of Philadelphia and took place on the Benjamin Franklin parkway. While the draft itself suffers in person, the entire event worked best as a festival to football.

Attending a major event like the NFL Draft always feels like a brilliant idea. For something that is a pretty poor television product, that belief is heightened. The NFL Draft is a weak TV viewing experience, but attending it in person probably makes up for that…or so one would assume. In actuality, the truth is the opposite.

I attended the three-day 2017 NFL Draft this year in Philadelphia, Pennsylvania, mostly because I live just a couple of blocks from where the event was held. Also, mostly because it was free to attend. These were two huge bonuses in favor of the draft being excellent.

The draft on TV is weak because it is essentially just a listing of names interspersed with commentary about the names that are listed. There is nothing to actually see or watch. In person, this was somehow worse.

There were at least three different audio feeds at the live NFL Draft. One was the hosting feed: the pair of emcees on-stage with microphones who came out in between picks. A second was a voice-over from somewhere in the bowels of the setup. The third was the television feed; the aforementioned commentary. Right from the start, two picks into the first round, a few things were blatantly obvious about the audio feeds.

I’m not sure why this was the design, but it was. The stage emcees were responsible for everything, though they didn’t seem to know it. The in-person audience was privy to none of the explanations or commentary from the TV experts. Yet the emcees were just that: a pair of mouths to keep the show moving along in between Roger Goodell coming out to announce the selections.

By the third day of the draft, even that final portion was removed. The selections in the later rounds are not even announced at the draft anymore, so us folks in attendance had no TV commentary and no pick announcements. It was all just a stage show of some sort.

This convoluted product all took place at the front stage, where thousands upon thousands of fans squished together to get their chance to boo Goodell within earshot. That was hardly the only portion of the NFL Draft experience in Philly though. The rest was actually kind of fun.

Prior to reaching the stage at the famed art museum steps, the entire Benjamin Franklin parkway was covered with games, events, pop-up bars, giveaways, and experiences. It was essentially a carnival with the NFL Draft taking place in the background. Other than random speakers and screens reminding folks of the picks, this fair rumbled on completely separate from anything taking place on stage at the end of the parkway. Going for the festival atmosphere and simply noticing the draft was probably the smart way to interact; the opposite left me disappointed.

It is safe to say, though, that most people were not disappointed. There were reportedly 250,000 people in attendance over the course of the three days. As a first-person account, I can say the standing area out in front of the stage was never clear or even comfortable; it was loaded with people each of the three days. The kids events were packed both Thursday and Saturday, with only Friday offering a bit of a reprieve. The line to take a photo next to the Super Bowl trophy was never short. The free Skittles at the Skittles booth went fast.

If Philadelphia is any indication, the draft works wonderfully as an outdoor, in-person event as long as the event isn’t just the draft.

More NFL Draft: Giants First Round Did Not Go According to Plan