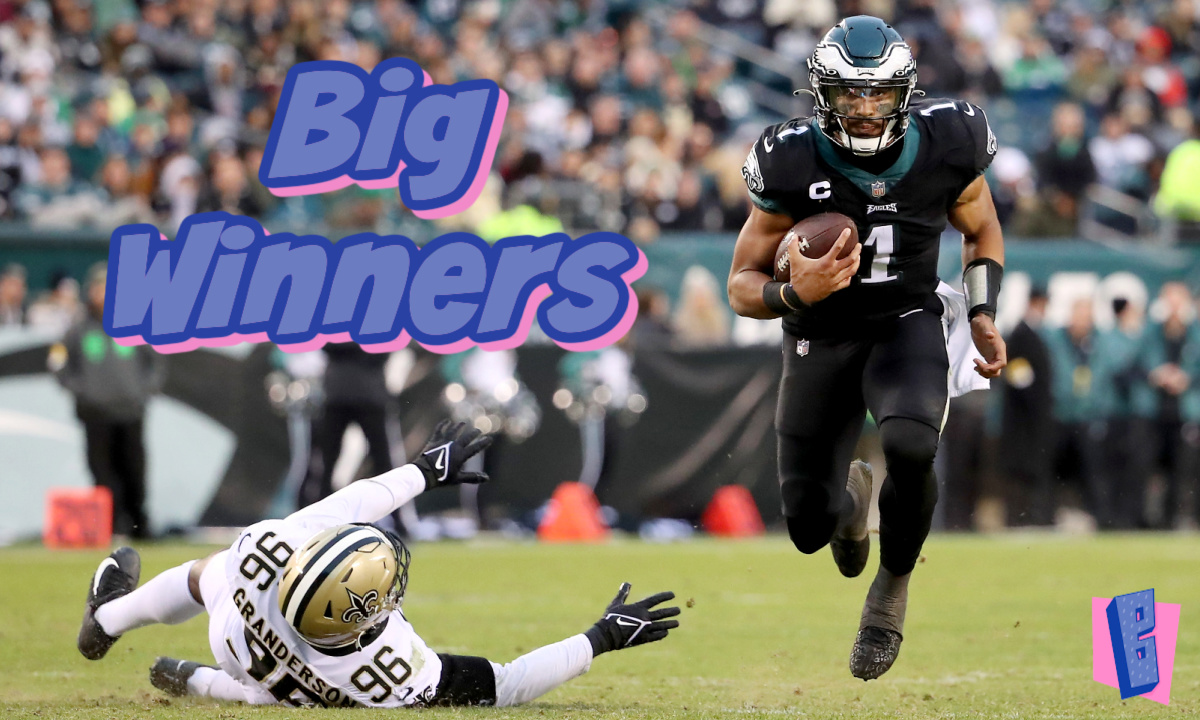 The NFL will never let itself look stupid, so prepare for the ultimate over correction. Top teams own the best picks in the NFL Draft 2023, so now we get change. A draft lottery is looming.

As the playoff field takes shape, we want to take a moment to glance at the other end of the standings. Something strange, perhaps unparalleled, is happening at the bottom of the standings, as it pertains to the top of the NFL Draft 2023.

This isn’t in reference to the very worst record in the league and thus the projected first overall pick in the 2023 NFL Draft. That looks like it will belong to the Houston Texans. Barring something crazy happening, the pick belongs to the Texans. Houston is two games worse than everyone else in the league. But take a look at just a few spots down. Woah.

Right now, tied for the second-fewest wins in the league, are the Denver Broncos and the Los Angeles Rams. Just one spot ahead (or behind) are the New Orleans Saints. What do these three teams have in common? They all owe their ’23 first-round pick to someone else. That is three potential top-five selections changing hands because of previous trades. We have to be in uncharted territory.

This is normally a storyline for the NBA. Basketball teams swap and deal first-round picks all the time, often in droves. There are occasionally protections put on those picks, but more recently, “unprotected first” has been THE asset to deal in the NBA. With that comes the potential outcome of a team trading away a pick that turns into something grand. This doesn’t often happen in the NFL, but we may be on the precipice. As it stands, several of the top teams in the league now own the NFL Draft 2023 due to trades in their favor.

NFL Over Reaction to Week 13

Todd Salem: An Anomaly Unlike the NBA

One reason we don’t see this a lot in the NFL is because teams that are trading away next year’s first pick are trading for the present, thinking they are going to be pretty good. We were pretty sure, preseason, all of the Broncos, Rams, and Saints were going to be at least pretty good, to varying degrees. It may feel like ages ago, but Denver and LA were thought of as title contenders before the season started.

It makes sense for a title contender to trade away a first for something to help now. In fact, the Rams succeeded in doing this. The ’23 first was sent to Detroit in exchange for Matthew Stafford, who helped Los Angeles win the freaking Super Bowl! No matter how bad things get there, that trade was a success. For Denver, adding Russell Wilson was supposed to be the final step in a similar vein, to bring a deep roster to the postseason. We know how that has gone.

I still think everyone would have done the Wilson trade again (although rethinking his contract extension). That doesn’t make this outcome any less embarrassing. Losing so bad by accident that someone else gets to make a top-five selection is mortifying. We sometimes see NFL teams thought to be tanking end up winning too much to pick in the top five, so to see someone on the other end fall all the way down is as bad as it gets.

From the other vantage point, Seattle and Philadelphia (the beneficiaries of the Broncos’ and Saints’ losing, respectively) are potential playoff teams this year. They are going to add top five (or so) picks to already winning clubhouses. With the Eagles, arguably the best roster in the sport will be adding a top-end draft talent. That doesn’t happen. That isn’t how the draft is supposed to happen.

The funny thing is, it’s hard to argue that any of the losers here made a mistake in the moment. Los Angeles is self-explanatory. As I said, I think most teams would have made the Wilson trade 10 times out of 10; the return was thought to be incredibly low at the time. As for New Orleans, it made a move up in the ’22 draft to snag pieces of value. They essentially made their ’23 first-round pick a year early. That isn’t a mistake in a vacuum. I don’t mind the logic at all.

So is there anything to glean from this circumstance? Teams look like idiots, but it doesn’t feel like any of them made a mistake in the moment necessarily. I’m confused.

Dan Salem: Expect An Over Correction

Even though the trades were justified and even praised at the time, all three were short sighted and ultimately foolish decisions. Yes, Matthew Stafford helped lead the Rams to a Super Bowl title. But was he truly the reason they went all the way? Was he a significant upgrade over Jared Goff? You never second guess what gets you to a championship, but the Rams are burned. They knew they were likely hemorrhaging their future for one or two great seasons. They had one and it was the best possible, but now they must pay the ultimate price. With Stafford struggling and now injured, the deal looks terrible. It wasn’t that single deal alone that won them a title.

You also can’t convince me that Denver and New Orleans didn’t over pay for what they got. It’s fine to overpay when you love what you get, but the results on the field speak for themselves. The Saints stink, as do the Broncos. Neither has their top pick in the NFL Draft 2023, so both are SOL. I don’t think this stops teams from making poor decisions and going all-in on a player. Heck, it’s the job of a general manager to convince others that what he has is gold. Some, like Joe Douglas, are much better at this than others. Others, like in Seattle, learn from their mistakes and then do the same thing to someone else. I’d like to tell you teams and GMs will be more hesitant to throw away the future for the present, but it’s not so. They will keep doing it, because it’s our society in a nutshell.

What is likely going to happen, and what I’ve already read rumors of, is the NFL taking action. They can’t allow the top teams to get all the best picks, while simultaneously making other teams look like idiots. That’s bad for the league and for the sport itself. The NBA has a draft lottery and I’ve heard it’s coming to the NFL. For the last few seasons there have been multiple teams with a bevy of first round picks. The Jets come to mind as one team who had a ton of high draft capital, used it well, and is now very good. But the draft is supposed to be an equalizer, so if the best GMs are dominating by making their competition look stupid, the league is going to do something about it.

This season the top of the draft belongs to several very good teams. A draft lottery lowers the value of those top picks, while also minimizing the potential damage done by stupidity. Outside of the quarterback position, the top 10 draft picks are almost guaranteed to be good players. They may not be stars, but they are all starters. Good teams find very good players in the later rounds, but people watch the NFL Draft for the top 10 picks. No one wants to watch the “maybe Super Bowl champion” Eagles selecting with the fourth overall pick. That’s blatantly unfair, even if no rules were broken. What do you do? Change the rules to make things fair again. Just wait.