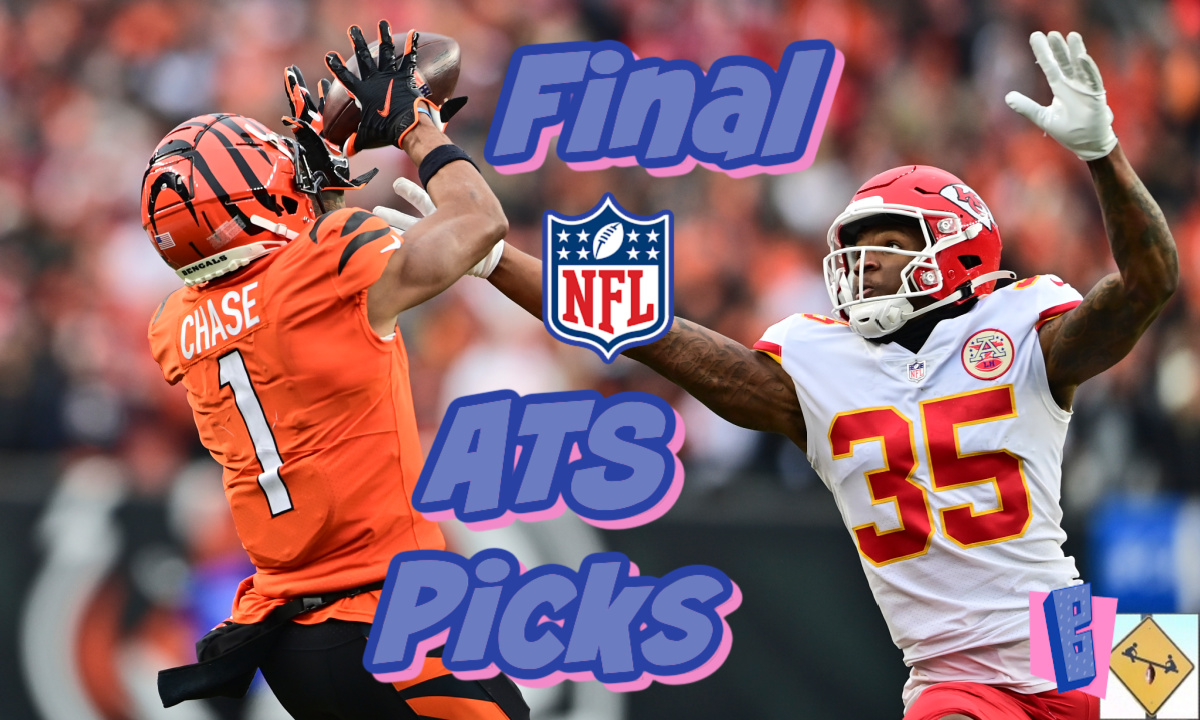 Home teams cruised, then road teams dominated. The NFL Conference Championship offers tantalizing lines, but do you drop the points or scoop them up? We’re split, with arguments on both sides. Your best picks against the spread.

After home favorites dominated the opening round of the postseason, road dogs took their revenge. Three of the four road dogs won outright in the divisional round. The lone favorite to advance was Kansas City, who toppled Buffalo in overtime in one of the greatest playoff games that has ever been played. Should we expect more of the same in the NFL Conference Championship?

Just four teams now remain alive, and we have no patterns to follow or trends on which to lean. That hasn’t stopped Dan from accumulating an early undefeated playoff record. Boom! Things only get trickier from here as the options dwindle and teams are one win away from the Super Bowl.

Will home teams once again dominate in the NFL Conference Championship? Will road teams continue to unseat the favorites? With only two games left, we are split right down the middle. Who do you trust, as Dan and Todd each love a road dog and home favorite? Each week, we will select two games against the spread. The NFL Conference Championship ensures betting is difficult. These are your best picks against the spread.

No knock against the Bengals, but it is hard to come out of last week’s games and think anyone left alive is on the same level as either the Chiefs or the Bills. They felt like the two best teams in the AFC entering the postseason. Now, I think they were the two best teams in the entire league. It is a bit reactionary, but they finally lived up to expectations that had been put on each of them entering the year.

That’s not to say Cincinnati can’t win or the Chiefs are now a lock to win the Super Bowl. Anything can happen each week. But KC is certainly a notch above the rest of the quartet that remains fighting for a ring. To me, that notch is at least seven points, which is what I’m forced to lay here. The Bengals will need an uber strong defensive performance to hang in this shootout.

I picked against the 49ers each of the first two rounds, thinking they were being overvalued. Now, I kind of wish they were getting a little bit more. I’m taking the points here regardless, not truly believing in either squad right now. The Rams look like different football teams week to week, but also within the same game. San Fran has at least been playing more consistent football. With road wins against two of the best in the NFC to start the playoffs, the Niners just need to stick with their defense-and-running blueprint.

Some folks might get squeamish taking SF in the third matchup between these clubs this year since it won the first two. There is no evidence that a team who won the first two games of a three-game matchup is more likely to lose the final game. And I like seeing that SF may have the Rams’ number. LA’s main strength, its pass rush, is lessened against a run-first opponent. The Rams lost against Tennessee earlier in the year and failed to cover against Baltimore, two more offenses that would fit the bill. We shouldn’t have to worry about third-time’s-a-charm if San Francisco is simply a bad matchup for Los Angeles.

It’s like we’ve been watching two different things throughout the NFL Playoffs. Cincinnati is playing tremendous matchup football and completely shutdown the best parts of Tennessee. Their defense is more than capable of slowing the Chiefs. Can we say the same about Kansas City’s defense? No we can not.

I love what the Chiefs did to Buffalo, but they did very little in the way of defense to stop the Bills. Sure, their offense was unstoppable. But dare I say the Bengals have a more balanced offense and have shown better defensive game plans thus far in the postseason. It will be hard for Cincinnati to win on the road, but they are getting over a touchdown. That’s more than enough to cover in this NFL Conference Championship matchup.

Los Angeles has the most momentum of any team right now. Overtime is great and all, but the Rams blew a 20 point lead to the defending Super Bowl champs, only to thwart them and win with some offensive fireworks of their own. I understand you must stop picking against the 49ers, because they fooled you twice already. But Los Angeles is home, with a chance to stay at home with the Super Bowl in LA as well.

Did I mention how the Rams dominated Tampa Bay? San Francisco has been great at slowing the game down and winning with the run and defense. But Los Angeles also has a great defense which stopped the Bucs all the way until it became Tom Brady time. Nothing about the 49ers’ offense makes me think they can put up similar numbers and I fully believe they will need to in order to win this time against Los Angeles. Drop the points and pick the home favorite.