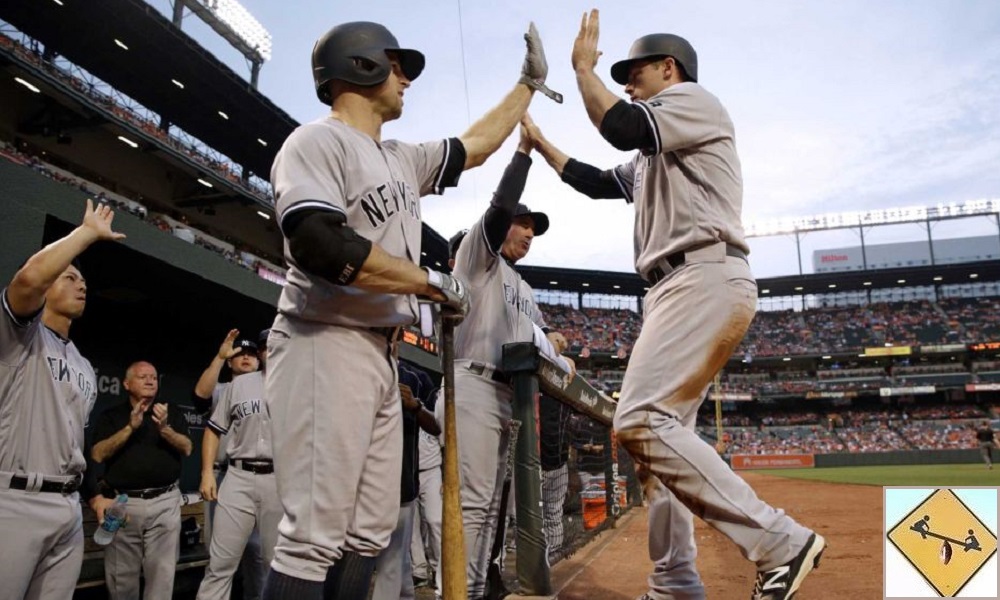 The New York Yankees have played red-hot since the All-star break and no one knows how to react. Yet the Orioles were all sick, so are the Yankees actually good? To win or not to win?

What do we do with a team that refuses to lose, yet isn’t good enough to continue to win?

After losing the first two games of the MLB season’s second half, the New York Yankees fell to 44-46 on the year. But, more importantly, they were trailing oh so many teams in both the race for the AL East title as well as the two wildcard spots in the American League.

Now, having won four of their last five, including taking three of four over the division-leading Baltimore Orioles, suddenly the Yankees are still alive, albeit not by much. They are still in fourth place in the East. They are still bunched together with eight or so other teams for the wildcard spots. Essentially all New York did this week was make life easier for the Boston Red Sox by knocking Baltimore down a few pegs.

ALSO ON BUZZCHOMP: Do We Boycott the Summer Olympics?

What do the Yankees do now? We were all set for their selling spree to begin. All veterans must go! Two-for-one deals on players over 35! Buy one Beltran, get a Sabathia 50 percent off! The sales were going to be crazy. Now, is this team still in it? Can they be sellers at all? We know upper management doesn’t want to sell off pieces, regardless of the team’s place in the standings and the feelings of general manager Brian Cashman. The Yankees aren’t sellers. It’s not in their DNA.

But we are smart fans (well, some of us). It would have been so good to see this wheeling and dealing and rebuilding take place, especially considering the names being bandied about for possible returns on the Yankees’ best assets. Has New York ever acquired multiple young pieces to bring excitement and potential to the future? I can’t remember if it has. This is always a team that does the opposite by trading away future prizes for help in the moment.

I feel like the worst-case scenario is coming to fruition as we approach the non-waiver trade deadline. New York will look just good enough where the Steinbrenners can talk Cashman out of any sales in a misguided attempt at the playoffs. I suppose making the playoffs gives anyone a chance at getting hot; and I do still like the ceiling of this pitching staff, regardless of what we have seen thus far. But there isn’t enough here to compete, right?

We should be looking to 2017, building around a base of Gregorius, Castro, Bird, Judge, Sanchez, Mateo and the arms. Adding two or three more pieces to that mix is really intriguing. Going 83-79 is not.

I’ve been a strong proponent of selling high on every possible asset, especially the players hitting free agency after the season. Rather than get nothing for Beltran and Chapman, why not trade them for something? In the offseason our Yankees can then go bid on their services like everyone else. The alternative is keeping them in pinstripes for the rest of 2016 and watching them likely walk away after the year. Yet life isn’t so simple and New York just climbed back up the roller coaster by winning four straight earlier in the week. Hope is fickle and just when you think you know what’s happening to our team, in reality you know nothing.

I saw the ceiling for the Yankees back in Spring Training. I saw how high it could climb, and as you noted, our pitching staff has yet to get anywhere near it. The playoffs are truly about great pitching and depth. New York has both on its roster, but up until this past week the offense was nowhere to be found. The offense was nowhere near good enough to win multiple playoff games, let alone a series. There was no consistency and no pop. It was the worst case scenario for a team that desperately needed to hit bottom. New York has been aging gracefully for years, but eventually things catch up to you and out with the old and in with the new.

I want to see our young guys play. I want a glimpse at the future. But more importantly, I want the Yankees to pilfer other teams’ farm systems for the rental services of Beltran, Chapman and more. It’s not inconceivable that New York is a serious title contender next season. The Red Sox went worst to first several times over the last five years and are nearly doing it again in 2016. The Yankees can do it too, if they simply admit they are actually not very good.

I’m confused. I want our team to win and now they are. Now they look pretty good. This should make me happy. Yet as a Yankees fan, I can’t remember a season in which we actually through in the towel. I’m too young to remember the bad times of the early 90’s. My earliest Yankee memory is the strike shortened season of 1994 when the team finally looked really good. Then they won it all in 1996 and have never looked back. Its been nearly twenty years since New York looked mediocre and on the outside of contention. Even when the Yankees missed the playoffs a few years ago, it never felt like they were out of it. New York was in a tight playoff race back then and simply fell short. Yet in 2016 the Yankees have felt inferior. That was until they took three of four from the top team in the AL East.

A reality check is in order, however. The Orioles were playing with a grossly depleted roster. The team was stricken with a terrible stomach flu that sidelined many of its best players for almost the entire series. Because we have been looking for any sign of hope, or perhaps a sign that New York was going to finally roll over and die, this simple fact got overlooked. Did the Yankees actually show that they are a decent team, or did they simply beat up on an injured opponent? Let’s not forget they lost two of three to Boston before hand.

The New York Yankees have won big because they think big picture. Now is not the time to focus on winning. If this mediocre Yankees team can win, then surely a team full of young talent and pieces brought in via trade can also win. I don’t see how this team gets worse by trading high on its best players. New York was not playing very well to begin with. The future can only improve by shopping around.