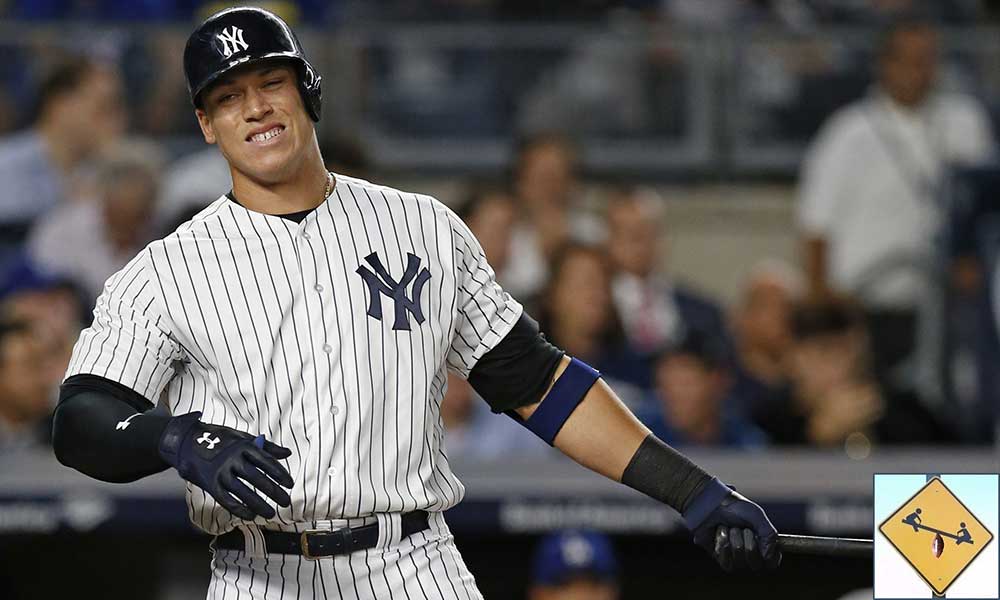 The New York Yankees have lost seven straight games. Is it time to hit the panic button? Bad teams knocked New York from first place. It’s a bad sign for a good team.

On June 19th the New York Yankees had the very best run differential in all of baseball. They have the second fewest losses in the American League and went on a six-game winning streak in the middle of this month.

All that is true. However, the Yankees have also just lost seven straight contests heading into Wednesday’s game. Their west coast trip against the Angels and Athletics was horrid despite the two opponents being a collective eight games under .500 even after crushing the Yanks. New York went twice into extra innings and grabbed one win over Los Angeles, but it still ended up with an L every game from June 13th through June 18th. Then the Yankees lost game one against the Angels at home on the 20th.

On the one hand, this seems like a simple regression toward the mean. The team’s offense has been insanely good. The pitching had also been playing over its head. The bullpen grabbed a number of losses in this bad streak, and the offense fell short occasionally. So is this seven-game slide just a blip or a sign of things to come? We know this probably isn’t the best team in baseball like its run differential represented, but it also shouldn’t be worse than the likes of Oakland and the lesser LA without Mike Trout.

ALSO ON BUZZCHOMP: How Team USA Will Play New 3-on-3 Olympic Basketball

One of the big culprits during the slide, the previously great bullpen, could be great again right away. Aroldis Chapman just came off the disabled list, pushing the other players back down a role and lengthening the entire group by one stud. The other culprit of a shaky offense came about because of injury and absence. Aaron Hicks missed a few games, as did Gary Sanchez. Greg Bird remains out, though seems on the precipice of at least a return to Triple-A. Brett Gardner has cooled off from his hot start; Jacoby Ellsbury remains out with a concussion. Again, are these signs that the Yankees were bound to slip and can recover, or that this team isn’t as good as its place in the standings indicates?

Then there’s the starting pitching, “led” by Masahiro Tanaka. Calling Tanaka an ace at this point is like calling some moron Einstein. The compliment is used ironically and with derision. But if Luis Severino continues like he is, maybe he’s the team’s number one arm anyway. Jordan Montgomery has been a god’s send. CC Sabathia has been surprisingly adequate when healthy as well. I can’t see myself pulling the panic button from one bad road trip two time zones away.

Then there’s the pessimistic view. The Boston Red Sox have pulled ahead of the New York Yankees atop the AL East. All five teams in the division are within 5.5 games of each other. And another series with the Angels has begun, albeit in New York. Plus, third base savior Gleyber Torres suffered an elbow injury at Triple-A and was placed on the DL. He reportedly tore his UCL and will miss the remainder of the season as he undergoes Tommy John surgery. Torres has an .863 OPS between two minor league levels this season, and oh by the way, is 20 years old. But despite management’s insistence that he wasn’t coming to the bigs this year, fans had been impatiently waiting for him since Spring Training. Now that is off the table until 2018 at the earliest. The offense should be fine, just less fun.

So where do you stand on the panic scale after seeing a number of injuries crop up and the Bombers fall to two weak west coasters? I’d have to say I’m a 4 out of 10. I’m not worried, but this past week has my spidey sense tingling.

If your spidey sense is tingling, then I’m flashing the bat signal and assembling the Justice League. On the panic scale I’m at a 6 out of 10, preparing to hit the button if this losing streak climbs to 10 games. The New York Yankees slipping behind the Red Sox is not of major concern in June. But losing seven straight to bad American League teams has me on edge.

I would excuse the sweep by the Oakland Athletics if it was not bookended by loses to the Los Angeles Angels. The Angels are a bad baseball team and good baseball teams are supposed to defeat the bad ones… easily. Yet the Yankees lost two of three in Los Angeles and have now lost at home to the very same Angels. New York needs its former ace Tanaka to play better, at least at the level of a second or third starter. It needs its bullpen to be dominant. But most importantly, the Yankees need to erase the bad taste in everyone’s mouth with a victory.

I don’t believe the 2017 Yankees needed Torres, but the season ending injury is still hard to handle. Its reassuring to know that multiple starters will be returning from injury very soon. Yet before the season we knew that pitching would make or break these Yankees. So far its been great, losing streak aside. I don’t believe these New York Yankees who lost seven straight are the real Yankees. But panicking in June is warranted when a small slide becomes a prolonged streak. That limit is ten games. We are almost at that limit.


I still believe in the 2017 Yankees. They are a playoff team with a bonafide rookie of the year and MVP candidate. But the pitching from start to finish must be consistent and return to form if anything beyond a wildcard berth is going to happen. New York has been impressive, but the second half of the season is more important. The stretch towards the all-star break is critical. The team must turn it back on right now.