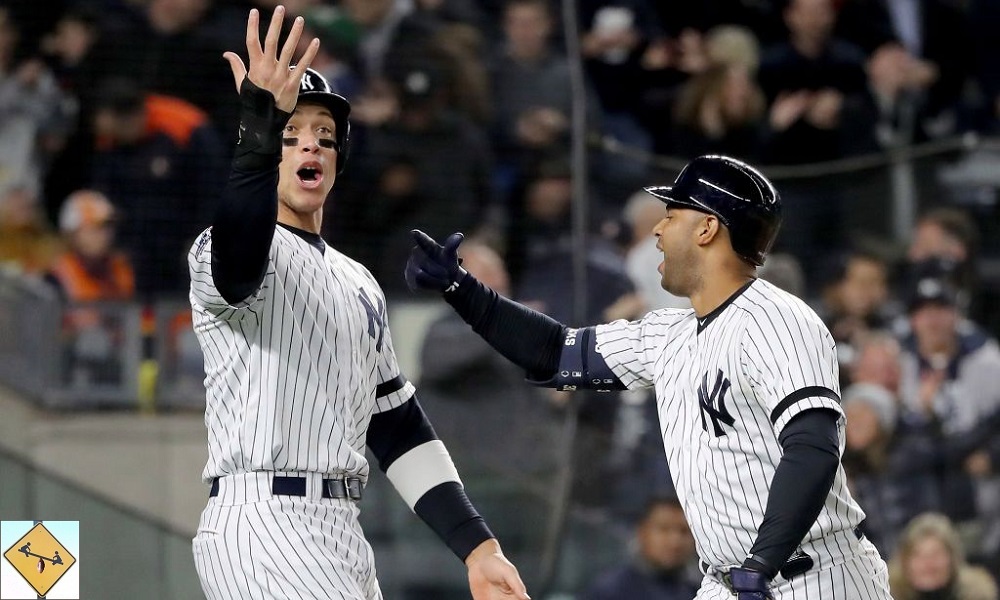 Its no secret that the New York Yankees fell hard to the Astros. But this team wasn’t supposed to win. We’re feeling quite peppy because 2020 is loaded.

While the Houston Astros face the Washington Nationals in the World Series, the New York Yankees watch from home. Houston knocked out New York in the ALCS in a series where the Yankees felt like the clearly inferior club. That’s not to say they had a bad team obviously, but Houston felt better in nearly every capacity.

That makes it weird to see the start Houston got off to in the World Series, dropping the first two games at home with Gerrit Cole and Justin Verlander on the mound. Both have been vulnerable all series. When the Yankees get bounced earlier than we had hoped, are you of the mind that you want the vanquishing team to get eliminated immediately or win it all? Get them out of there out of spite, or allow New York to stake a claim as the second-best team? Or does it matter? I’m leaning toward it not mattering. There’s no joy for the Yankees in either outcome.

The funny thing is, on the whole, the 2019 season was wildly successful for New York; even miraculously so. Considering all the injuries this team went through, the fact that it had such a wonderful regular season and made it to the ALCS speaks volumes. I think Aaron Boone should be AL Manager of the Year for keeping this squad on track. Every year that does not end in a ring is supposed to be considered a failure in New York. Aaron Judge even admitted as much after the elimination. But this season felt different. It was incredible what they accomplished.

The Yankees are never anyone’s underdogs, but they felt like underdogs against the Astros. And underdogs aren’t supposed to win. That’s the point. Next season, they will not be underdogs, as the roster returns to (mostly) full health.

Aaron Hicks will be out in 2020 after needing Tommy John surgery. Other than him, we should get healthy returns from Miguel Andujar, Luke Voit, Jordan Montgomery, and Giancarlo Stanton. If they are re-signed, throw Dellin Betances and Didi Gregorius on this list too, the latter of which played but never looked like his old self.

These returns will bring up the question of what lineup the team will actually field. As we saw this season, depth is a virtue, so I’m not complaining. The more pressing question will be who makes up the starting five on the mound. CC Sabathia has retired. Domingo German cannot be counted on to be on the 25-man. Gerrit Cole is obviously being mentioned as a starter to target in free agency, but I think the team would be better served finding two or even three lesser starters to build the back end up. I like the top three of Luis Severino, James Paxton, and Masahiro Tanaka just fine. And the bullpen should be as potent as always, even if Betances moves elsewhere in the hopes of closing. We just played the entire season without him after all.

As you can tell, I’m feeling pretty good about the state of the roster even after a healthy whooping in the championship series. Are you feeling just a peppy?

I’m disappointed in how the New York Yankees season ended, despite being thrilled at how well the team played and how much they accomplished. Rooting for or against the Astros has nothing to do with Houston and everything to do with their opponent in the World Series. I want to see the Nationals win the championship for two reasons. First, they have never won a championship, let alone reached the World Series. Second, I find it hilariously ironic for Washington to win the title a season after letting its best player walk in Bryce Harper.

That being said, Houston looked like the best team all year and after winning three straight in the World Series, was playing like it. Washington then pushed it to a Game 7, meaning the Astros are more vulnerable than advertised. The Yankees looked poised to challenge them, but ultimately came up way short.

You are correct in saying that New York was not supposed to win, but incorrect in feeling like they weren’t good enough to do so. The Yankees had the offense and pitching to beat Houston and win the World Series. They left an inexplicable number of players on base, after getting all of those same runs to cross the plate versus Minnesota. The Astros pitching staff deserves some credit for holding off the Yankees offense, but failing to deliver falls on New York’s shoulders as well.

No need to quibble over spilled milk that hardened and dried quite some time ago. Next season is poised to be huge for the New York Yankees. If they could overcome a historically bad season of injuries to win over 100 games and reach the ALCS, then imagine what a healthier team will accomplish. Imagine what a healthy Yankees team plus one or two blue-chip free agents looks like. Cole is enticing, but I’m with you. Add depth to the staff and ensure spots four and five are on par with spots two and three. This pushes New York over the top.

I won’t go so far as to say I’m happy yet, but I’m definitely enthusiastic about the 2020 season. The New York Yankees have a young, talented and deep team. The competition is still quite fierce within the AL East and American League at large. But New York keeps getting better and enters 2020 with a huge chip on its shoulder. I’m feeling pretty good and am willing to be peppy after a deal or two goes down.