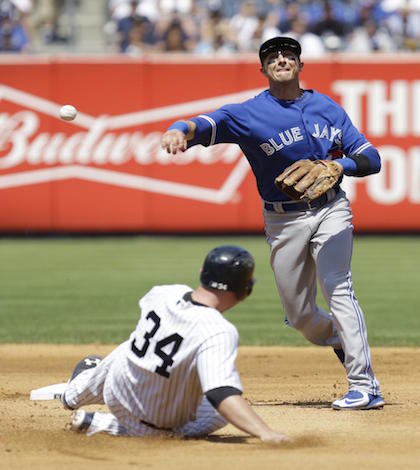 The New York Yankees were on a tear, before hosting the Toronto Blue Jays for a three-game series in early August that ended in a Blue Jays’ sweep. New York hadn’t lost a series since the month of June, winning nine in a row. The offense was gaining steam, scoring over ten runs in three different games in the past two series alone. Before the sweep, the Yankees held a rather commanding lead in the AL East. That lead is now gone, and first place belongs to Toronto.

Things seemed so different just two short weeks ago. Prior to the MLB non-waiver trade deadline, New York was playing outstanding baseball and was heavily outpacing preseason prognostications of its abilities. The offense was on point and the everyday players were staying healthy for the most part. Renaissance seasons by Mark Teixeira and Alex Rodriguez have helped spur along what was predicted to be a below-average unit. The bullpen has been stellar all year as well. If there was a single spot where New York needed a boost, it was in their starting rotation.

ALSO ON BUZZCHOMP: Can Yankees Hold off Blue Jays?

The team’s two aces, Masahiro Tanaka and Michael Pineda, have both battled injuries. Veteran CC Sabathia pitched so poorly, that most fans were hoping for an injury from him as well, just to get him out of the rotation. The rotation needed help.

Normally moves like these, from a contender and a rival, would have pushed New York to spend heavily. In fact, the old Yankees’ guard wouldn’t have needed any encouragement to make big splashes at the deadline to secure a division title. Management should have at least taken the Blue Jays’ moves as a kick in the pants this season. The Yankees, it appeared, would not have enough to hold off their division rivals, even with a six game lead at the time. We now know that to be true.

Being quiet at the trade deadline isn’t always a bad thing. Teams often overpay for rental players who will become free agents in two months, or they take on too much money for players who won’t be worth it by next season. But these are the Yankees, and when the playoffs are at stake it’s worth taking a risk. Why else play, if not to take your shot at the title when it presents itself? That’s exactly what Toronto did, and that’s what’s most frustrating about New York staying quiet at the deadline.

The argument against making a big trade went something like this: “Why mess with something that is working so well?” But that shortsighted logic ignores the larger point. This Yankees team was overachieving. The 2015 Yankees needed help.

That was the landscape New York faced at the trade deadline. So how could the Yankees not make a move? Did they throw away their chances at a division title and a playoff berth, by being content rather than proactive?

It’s hard to be critical of a team avoiding a panic-trade. However, there are cases like this where standing pat can be just as detrimental. We’ll just have to wait and see whether the 2015 New York Yankees add someone of impact through waivers, or simply reverse course and grab the momentum back from Toronto before it’s too late.