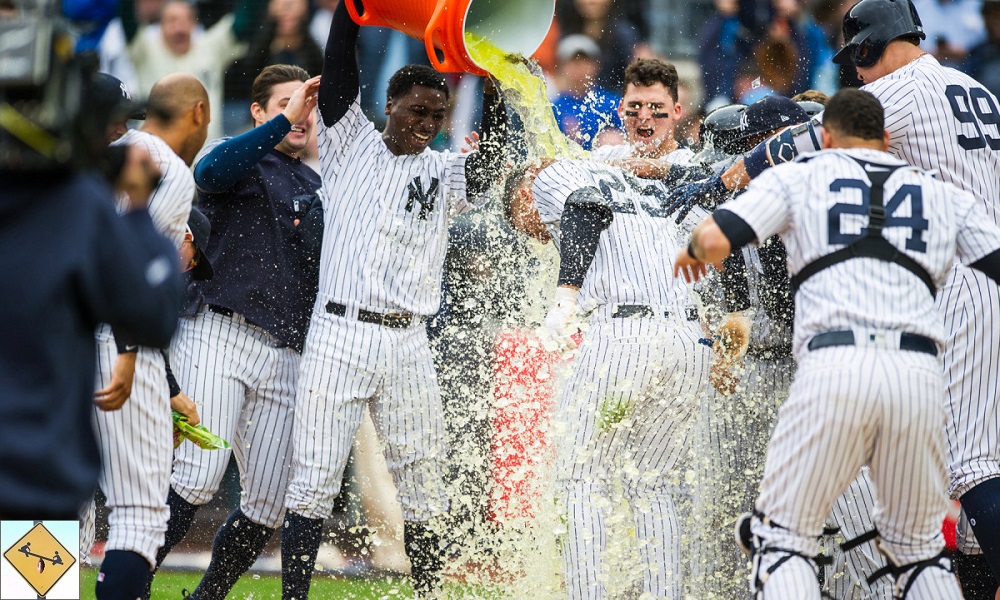 Its been a wild ride for the New York Yankees, as the team keeps winning with dazzling comebacks. This manner of victory is not sustainable, so how can the Yankees fix their pitching issues?

The New York Yankees just put together a week for the ages. After a 9-9 start to the season, New York flipped the switch, winning 15 of its next 16 games, bringing its season record to 24-10. That culminated in a slew of final at-bat wins against the best teams in baseball.

Before facing the best of the best, NY swept the Minnesota Twins in a four-game series. In the final game of that series, the Yankees were down 3-1 in the ninth inning before Gary Sanchez hit a three-run, walk-off home run for the victory.

A series sweep in Los Angeles followed. The three wins included one in extra innings where NY scored once in the ninth to force extras and got a home run from Didi in the 10th. There was also a 2-1 nail-biter, where a Sanchez two-run home run was the only score for New York.

Hosting Cleveland, the New York Yankees continued their magical ways. A three-game sweep began with New York scoring in the eighth and ninth inning to walk off. It finished with a flourish. The Yankees tossed seven combined no-hit innings until the Indians pushed across four runs in the eighth. With everything going their way, the Yanks weren’t dissuaded. They scored three in the bottom of the inning and four more in the ninth to walk it off again, this time on a Gleyber Torres three-run homer.

Heading into their series with the Boston Red Sox on Tuesday, the Yankees aren’t the best team in baseball by record. They haven’t even surpassed Boston in the AL East. However, no one is hotter right now than the Bronx Bombers. And these two teams do have the two best records in the sport as of May 7.

Does anything worry you about the way the Yankees are playing and winning right now? It is awesome to behold, but all these comeback and walk-off wins have had something in common. The bullpen continues to disappoint and relinquish leads. And we are getting short on arms to begin with, thanks to disabled list trips for Luis Cessa, Tommy Kahnle, and Jordan Montgomery.

It is stupid to expect late-inning magic to continue all year. The better solution would be to hold onto eighth and ninth innings leads to begin with. The battle for the East division title and avoidance of the wildcard play-in game should last all year. The Yankees’ victory likely comes down to the one unit we expected to be great prior to the year – the bullpen – actually being great. Though I wouldn’t mind another half-dozen Gary Sanchez three-run walk-off homers before we get to October.

The New York Yankees’ bullpen is definitely a concern, yet its one area that is easily fixed via multiple different solutions. Ideally the unit plays itself up to the aforementioned preseason expectations. At the very least, New York’s bullpen should play better and find middle ground between their predicted dominance and the actual results on the field thus far. This is generally how baseball works. Despite a slow start, units are not ultimately far from what we thought they were in spring training.

Considering the list of pitchers on the Yankees disabled list, their bullpen may never be anywhere close to as good as one expected. Fortunately, this does not include their closer. New York can then look towards a trade to add depth and reliability to their bullpen. Multiple teams are practically out of the playoff race already and several have quality arms in the pen. Of all the issues to have, I feel lucky that the Yankees are having bullpen issues.

We agree that winning in walk-off fashion is not sustainable, but the clutch nature of this team can not simply be written off. New York seems to have it when it counts most at the plate. The Yankees have had it versus the best teams in baseball thus far. Despite being 11th in batting average, New York is ranked 3rd in on base percentage and 1st in runs scored. The one area that needs improvement is currently flying under the radar.

The Yankees need to improve their quality starts from the rotation. New York is ranked 9th currently and 6th in team ERA. An inability to get quality starts is putting added pressure on the bullpen, making them more vulnerable. Because this team has overcome these issues thus far, we can easily say they are in a good place. The team’s batting average against ranks 2nd, so we know they are pitching very well. The come from behind wins have masked the early exits by the starters that have led to more bullpen innings and mistakes. Consistency on the mound is needed to maintain New York’s current level of success.

More BuzzChomp: Fitness Is A Lifestyle