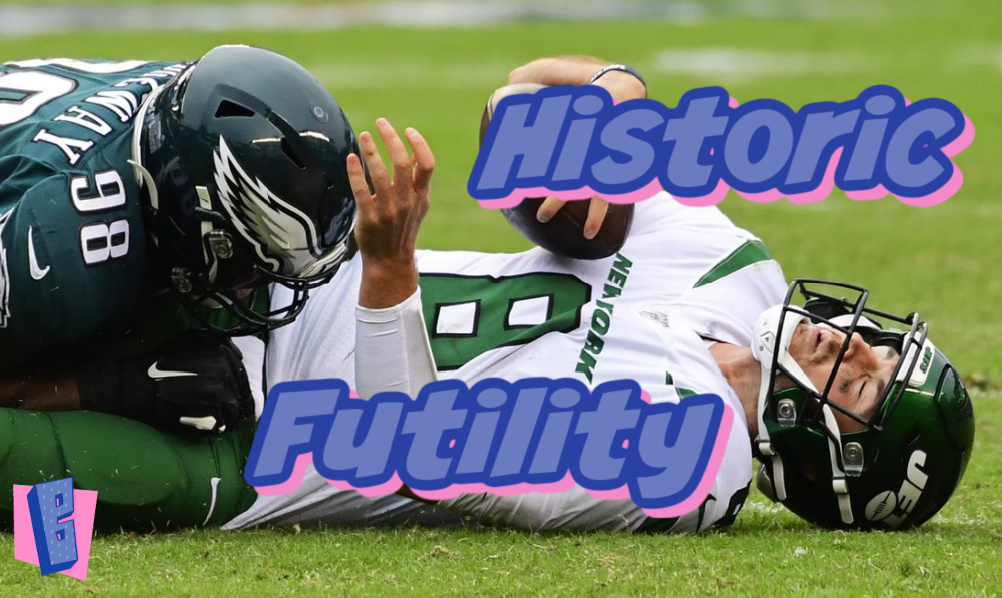 By all accounts, the New York Jets approach to offense is insanity. Doing the same thing over and over and expecting a different result. Their record setting pace will surely go down in history.

The New York Jets have played six games thus far in 2020 and scored 75 points. For those too tired of losing to perform the necessary mathematics, this equates to 12.5 points per game. With a -110 point differential, its safe to say our Jets are on a record setting pace for historically bad offense.

Will the New York Jets accomplish their goal of dominating the league… with the worst offense of all time? Is setting an all-time record a decent consolation prize to once again missing the playoffs? Technically no, but perhaps yes. There is nothing worse in sports than average. Being 8-8 and missing the playoffs is the worst outcome for an NFL team. Perhaps Jets’ fans would love anything other than a losing record right now, but this is as foolish as the offensive game plan this season.

Making the playoffs is the goal. Second to that, securing a top five draft pick is the goal. Teams gain little to nothing by falling in the middle, so credit New York for tanking for Trevor without actually #TankingForTrevor. They successfully #SuckedForSam all those years ago, but quarterback Sam Darnold has yet to do enough. He’s been injured in each of his three seasons and does not own this football team like a franchise leader must. I’m not placing blame, and Sam is more solution than problem, but he is part of this historically bad offense. Sucking for Sam certainly didn’t work, so why not tank for Trevor?

Last season the Jets had a better defense and the unit has certainly made big time mistakes this year, but New York’s defense is not its problem. Being on the field all the time is demoralizing. Knowing your offense is not going to find the endzone is demoralizing. Getting called for bogus penalties because your defensive coordinator has a poor reputation is demoralizing. Wearing green and white is demoralizing. So what about the historically bad offense? Is Adam Gase doing the best he can with the weapons he has? Absolutely not.

Also on BuzzChomp: Raised by Wolves Season 2 Predictions of Death

As an expert of the game and a man watching from the sidelines, its fairly obvious to me what is plaguing New York’s offense. Often times we get stuck in our ways and Adam Gase is stuck in his. Coach Gase continues to utilize his offense and playbook, despite the mountain of evidence that proves it to be a bad fit for his personnel. All coaches have their offensive style and their favorite set of plays. They also must accept the players given to them, because its foolish to try and fit your players into your offense when the opposite approach is what wins at all levels of all sports.

The job of a head coach is to learn his or her player’s strengths and weaknesses. Then you must analyze your playbook and schemes to make adjustments, additions, and deletions best suited to your set of players. To win, a coach must do this every offseason at a minimum, but the best coaches make these adjustments weekly during the season. Our greatest coaches make these adjustments in game and not just at halftime, but from series to series. Grudges, biases, ego and stubbornness have no part of winning and success. Unfortunately for the New York Jets, Coach Gase has exhibited severe signs of all four ailments.

My colleague at BuzzChomp, who just so happens to be an even more devout Jets fan than I, has been in #FireGase mode since early August. He’s not wrong, but he’s also not right. Gase is not going to win with these players, because they don’t compliment his type of offense and he appears unwilling or unable to adapt and change. New York can win and score points with their current offensive makeup, but not as constructed under Gase. Will they continue on this record setting pace for futility? Survey says… yes.